A new brewery that broke ground in February and an upcoming sports complex are just two examples of companies eyeing a move to Tomball or expanding their footprint in the city. 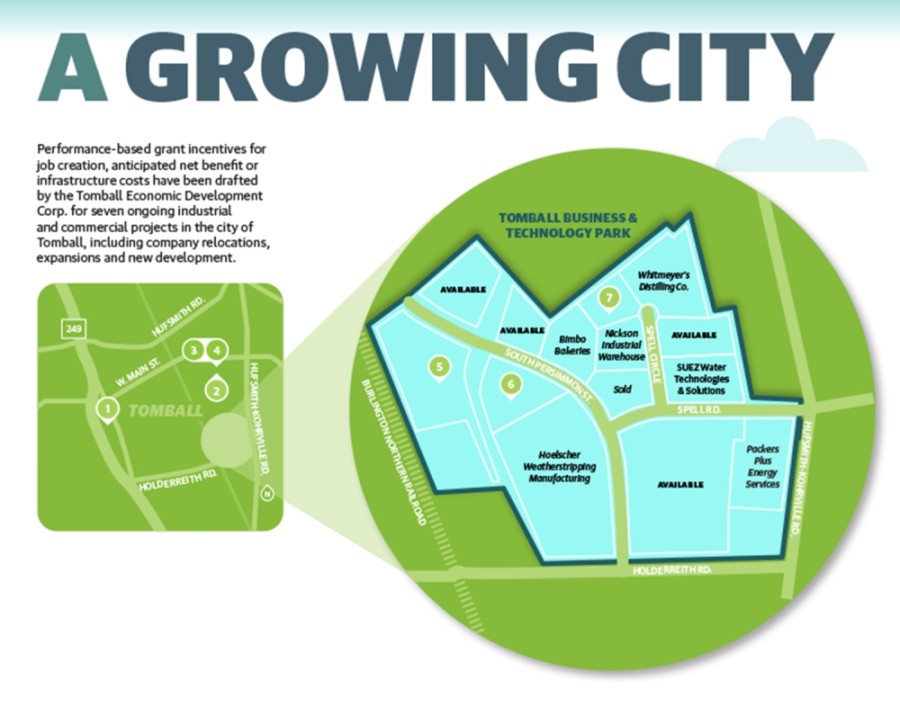 This comes at the same time the former BJ Services campus in Tomball—once housing about 800 employees—lies nearly vacant following the oil and gas company’s bankruptcy announcement in July.

“The [COVID-19] pandemic and continued challenges in the oil and gas sector have certainly impacted industrial and commercial users in the region,” said Kelly Violette, executive director of the Tomball Economic Development Corp., in a Feb. 1 email. “Some have put expansion plans on hold, while others have been absorbed by other companies that are looking for an opportunity to bring services in-house and reduce costs. Overall, we have continued to experience tremendous growth in industrial and commercial developments in Tomball.” 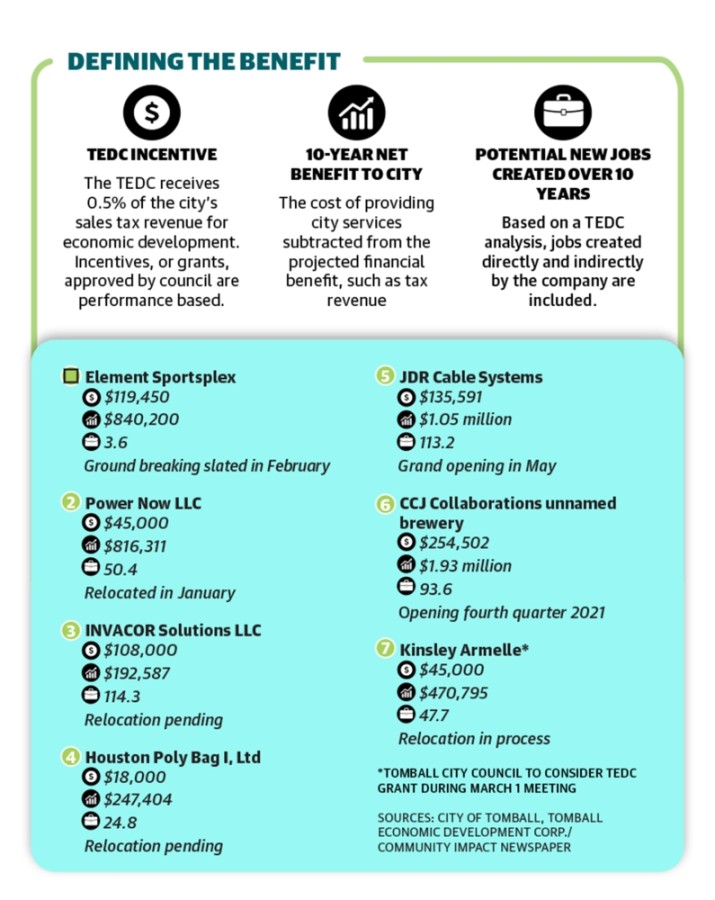 Despite the ongoing pandemic, the TEDC has inked seven performance-based grant agreements totaling a potential investment by the TEDC of more than $725,000 to help with job creation, retention and infrastructure costs for ongoing industrial and commercial projects in the city. These seven projects are anticipated to yield nearly 450 new jobs—directly and indirectly—and a more than $4.7 million net benefit for the city over the next decade, according to TEDC information.

The net benefit is calculated by subtracting the city’s investment—the cost of providing government and utility services—from the projected financial benefit to the city, such as sales tax revenue, property tax revenue and utility revenue.

With heightened interest in the Tomball Business & Technology Park—located at Holderrieth and Hufsmith-Kohrville roads—Violette said the TEDC repurchased 10 acres in late 2020 from Packers Plus Energy Services, the park’s first tenant in 2015. This leaves about 29 acres remaining of the nearly 100-acre park.

The park is a project of the TEDC, which receives 0.5% of the city’s sales tax revenue to further economic development. It is governed by a board of directors appointed by City Council, and council must approve TEDC projects, such as grant incentives based on new jobs, a project’s net benefit or infrastructure costs, Violette said.

“They’re going to mean more jobs, and more jobs in Tomball is going to be good for the retail and restaurant sectors that have suffered some [from the pandemic],” said Tom Condon, senior vice president of Colliers International, the TEDC’s real estate broker.

Likewise, Spring-based jewelry brand Kinsley Armelle is in the process of relocating its headquarters to the park, Violette said. The business—with 16 existing employees—plans to add 14 jobs within two years, according to a Jan. 12 TEDC meeting.

“What started as a small Etsy shop ... Kinsley Armelle has grown in five years to a global brand with over 200,000 customers,” Steven Habel, founder and managing member of Kinsley Armelle, wrote in a Jan. 5 letter to the TEDC. “We originally started the business in the spare bedroom of our home in Tomball. ... So, in many ways Kinsley Armelle is coming back home.”

Chris Juergen, a Tomball High School graduate, former brewmaster at Houston’s Karbach Brewing Co. and founder of CCJ Collaborations, is also returning to Tomball. The brewery underway by CCJ Collaborations and located within the park is slated to add 55 jobs within two years, Community Impact Newspaper previously reported. Further, CCJ Collaborations said in a July 23 letter to the TEDC the company expects to add 30 additional employees within five years.

“We’ve very excited about this coming,” Fagan said. “I think again [it’s] an added bonus of something different and unusual for the city of Tomball.”

The new 10,500-square-foot facility—including a brewery, restaurant, and packaging and distribution space—is •expected to open in the fourth quarter of 2021, Violette said. 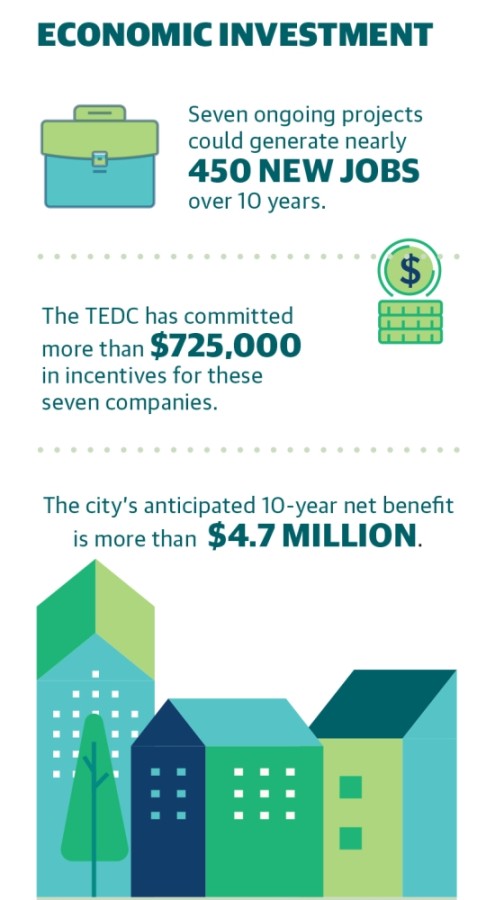 “That’s really going to be an amenity to the park for its occupiers, and then it will also just be kind of a tourist magnet for the Tomball area as well,” Condon said.

Outside of the Business & Technology Park, ground was slated to be broken in February for a 44,000-square-foot, two-story indoor sports facility on Theis Lane, Violette said, although construction had not begun as of press time. The Element Sportsplex will be the new home of Legacy Volleyball and feature six indoor volleyball courts and two indoor basketball courts, according to city information.

In addition to three new jobs created by the facility, Jorge Campos, managing member of developer TCG Capital LLC, wrote in an Aug. 6 letter to the TEDC that an expansion is already in the plans for an adjacent tract of land.

The standby generator sales and service business, located on South Persimmon Street, has added two jobs since its relocation from Cypress as business has more than doubled since the onset of the pandemic last spring, Northway said. TEDC information shows the company plans to add 30 jobs within 18 months.

“We already have plans of growing here in the next 24 months or so, and we’re working with the city right now to look at the business park, because ... now that we’re here, why would you ever want to leave?” Northway said.

In addition to Power Now, the TEDC has inked a grant agreement with INVACOR Solutions LLC—a pipeline services company—slated to relocate and consolidate its operations from Houston and Angleton, according to a Dec. 7 City Council meeting. By late 2022, the company hopes to expand its staff from 13 to 72 employees.

INVACOR Solutions’ relocation and a proposed expansion of Houston Poly Bag I Ltd—poised to create 12 jobs for the Tomball-based company—are slated for the former BJ Services campus. However, the companies’ moves are pending, Violette said, following BJ Services’ bankruptcy.

Violette said the TEDC is working with Colliers International on repurposing the 70-acre BJ Services campus at FM 2920 and Hufsmith-Kohrville Road.

“It was a major employer in the area,” Condon said. “When only 17% of the campus is occupied ... and the loss of the jobs, that’s big on Tomball.”

“We want to be a part of the community. We felt that this was one of the rare cities in Texas that has that community vibe to it,” Northway said. “There’s no place that we know of in the Houston area that still has this [hometown feel].”

Further, Condon said he chalks the interest up to city infrastructure investments and the improved mobility allowing greater access to Tomball.

Mobility projects underway include the multiagency Hwy. 249 extension from Tomball to Navasota—set to fully finish in late 2023—and the city’s extensions of Medical Complex Drive from Agg to Hufsmith-Kohrville roads and of South Persimmon Street to Holderrieth Road wrapping up in the third quarter of 2021.

“A developer couldn’t have placed Tomball in a better location if they really tried,” Hillegeist said. “You’ve got to have good roads for travel and for getting from here to there and especially goods and services. We’re going to see a lot of growth in Tomball and Magnolia because of Hwy. 249.”

An upcoming widening of Holderrieth Road is set to be sent for construction bids in 2022, according to Harris County Precinct 4 officials, as well.

Sandy Pham, office manager of Luc Technologies based in Houston, said the company recently purchased 5 acres near Holderrieth Road and South Cherry Street. Pham, whose family has lived in Tomball for more than 20 years, said the business plans to relocate and expand in the next two to three years to be closer to home.

“We wanted to stay somewhere close by, and we’ve seen a lot of the growth in Tomball since we’ve been in the area,” she said. “The growth potential is there, and the widening of [Holderrieth Road] is coming up hopefully soon.”