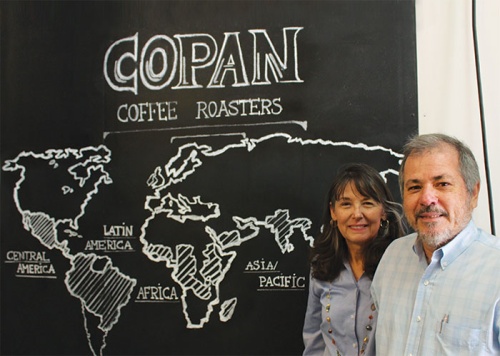 Owners Sheri and Walter Dunaway started Copan Coffee Roasters as a coffee farm in Honduras 35 years ago. In 2002, the couple opened a coffee roasting facility in Tomball.

When Sheri and Walter Dunaway started a coffee farm in Honduras 35 years ago as a side business, the couple could not have imagined the coffee company’s success today, Sheri said.

At Copan Coffee Roasters—which opened in Tomball in 2002—green coffee beans are shipped via the Port of Houston and hand-roasted and packaged at the Tomball facility to preserve the coffee’s freshness. Green coffee is imported primarily from Honduras—where the family farm remains—as well as from other regions. The business offers private label services as well, meaning the coffee is roasted with its own flavor profile and packed in custom bags.

“What makes us unique and different is that we do ... all the importing to the roasting to the delivering of it,” said son Daniel Dunaway, sales operations manager for the business. “We make it even as far as going to the country of origin, working directly with the farmers and the exporters as well.”

After moving from Honduras to the U.S. in the early 2000s to provide a better education for their children, the Dunaways settled in Magnolia and opened their coffee roasting business in Tomball. Three Dunaway children are involved in the business today.

Since opening in Tomball, the business has nearly outgrown its facility due to demand, Sheri said.

“In the beginning when we started, there wasn’t that boom [of coffee connoisseurs]. It was a few years later that the boom came up,” she said.

Copan’s hand-roasted coffees can be found at small retailers and shops, including Arlan’s Market in Magnolia, Third Gen Coffee in The Woodlands and under the Klein Bros label, Daniel said. Green coffee—ready for others to roast and sell themselves—is also offered. Bagged coffee is available for purchase online.

“More than just being a coffee company, we’re a service company,” Daniel said. “We still buy from the same producers, from the same families [as my parents started with]. The same way we’ve grown to the second generation, they have as well.”