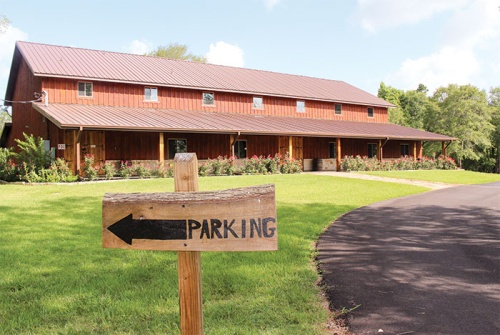 Magnolia Meadows is located in Magnolia.

Nearly half of the local wedding and event venues located in the greater Tomball and Magnolia areas opened in 2017 and 2018, and at least one more is slated to open this fall.

Located near the Grand Parkway, Hwy. 249 and The Woodlands, venues in Tomball and Magnolia offer guests accommodations with easy access to major thoroughfares and amenities, said Stacy Jones, owner of the 10.5-acre Estates at Pecan Park that opened in May in Tomball. The venue features a pecan orchard and plantation-style mansion.

“I would say that [the area has] grown so much that we felt like especially with the Grand Parkway and [roads] coming through that we couldn’t go wrong in Tomball,” she said. “I feel like the potential is limitless.”

“I think the intimacy [is desirable],” said Sheila Settles, property event manager for Magnolia Bells, a 17-acre venue that opened in March 2017 in Magnolia. “It’s quieter up here, and pricing is so much better in North Houston than you find in the city.”

“It’s close enough to the city, but it’s far enough away that you still feel almost like it’s Destination Magnolia,” Settles said. “With all the roads going in and the ease of traffic, it’s just a great opportunity for a place to get married.”

The growth of venues may also be spurred by couples moving away from wedding ceremonies hosted in a church, said Spencer Covey, co-owner of Magnolia Meadows. Covey designed and built the 18-acre venue, which opened in September on Dobbin Hufsmith Road and features handcrafted chandeliers, oak doors and an outdoor pergola.

“I think the main thing is some people get married in a church, but churches don’t really cater to the reception,” Covey said. “[Couples are] getting away from the church thing because they want the whole reception and the dancing to be really pretty just like the ceremony.”

“We’re really trying to take advantage of the trees and all the greenery,” said Amanda Vela, manager of The Meekermark, which opened in May in Magnolia and features an open air chapel as well as a 200-year-old barn on 12 acres.

Rosehill Collection & Event Hall, Grand Rose Events and Venue 311 have also opened since 2017. Sandlewood Manor is set to open this fall as well.

“I think brides choose this area for the same reason we chose to build here,” Vela said. “There’s just a lot of greenery, and there’s just something really genuine about getting married outdoors.”

A number of wedding and event venues have opened in Tomball and Magnolia since 2017 with more slated to open later this year. Venue-only rental prices are listed for new venues and vary by day of the week.