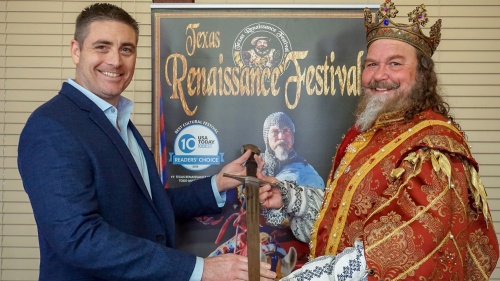 The king of the Texas Renaissance Festival welcomes Joseph Bailey (left), who began serving as the festival's new CEO and general manager in early February.

The annual festival, founded in 1974, will celebrate its 45th season this fall.


“I am very excited to be joining the Texas Renaissance Festival in time to celebrate its 45th anniversary year,” Bailey said in the release. “Having been a patron of the festival for over 25 years, I know that TRF is a Texas institution and has grown to become a regional, national and international attraction. I look forward to helping guide the festival into the next 45 years of magic, merriment and fun.”

Bailey, a native Houstonian, previously served as senior manager of service transition planning and support for Motorola Solutions in Schaumburg, Illinois, and graduated from the University of Texas at Austin with a bachelor's degree in electrical engineering, according to the release. He joined festival officials Feb. 4 in his new role.

“I am delighted to welcome Joseph as our new CEO,” George Coulam, TRF owner and founder, said in the release. “Joseph has demonstrated consistent success leading large teams globally to deliver solutions and grow revenue for his stakeholders. I believe he is just the person to lead the Texas Renaissance Festival at this point in our history."

The 2019 festival season debuts Oct. 5-Dec. 1 in Todd Mission, just north of Magnolia. More than 640,000 guests attended the festival across nine weekends in 2018, according to the release.