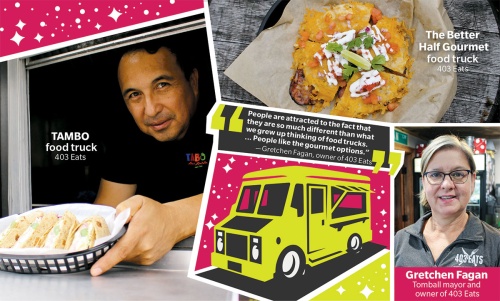 A number of food truck and craft beer associated eateries have opened in the last two years in Tomball and Magnolia as well as more than 40 locally owned restaurants.

In the last two years, 46 locally-owned eateries have opened in the Tomball and Magnolia areas with nine known eateries still to open in the next several months, according to data compiled by Community Impact Newspaper. This includes a number of food truck parks and Tomball’s first brewpub.

The local trend is occurring across the region. The Greater Houston area has seen the number of restaurants grow from 10,000 to 13,000 in the last five years, said Melissa Stewart, executive director of the Greater Houston Restaurant Association.

City and business leaders said they credit this rise in locally-owned eateries, food trucks and breweries to being a growing region, serving high-quality food and having a sense of community.

“We get a lot of people that come in and say it’s so nice to have a mom-and-pop [establishment] and not one of the chain stores in here. They say it’s nice to have a little shop that’s theirs and that’s here in town,” said Sheila Blue, owner of Victory Pie Co. & Cafe, which opened in February on Tamina Road. “People are just wanting that small-town feel and a little bit of community and connection.”

Old Town Tomball and the areas bordering The Woodlands have seen the bulk of the restaurant growth. Half of the new eateries have opened here since October 2016, including Brick & Brews, Victory Pie Co. & Cafe, 403 Eats and Fire Ant Brewpub.

Mike Baxter, director of marketing and tourism for the city of Tomball, said the new eateries draw visitors from afar.

“We draw heavily from the north side of Houston, Harris County and the adjoining counties up here, but we’re finding that we’re also drawing from the Inner Loop for the first time,” Baxter said. “People are coming to Tomball to get out of the city, and that’s where all these special restaurants, the mom-and-pops and our new brewpub are coming from.”

“Tomball does a great job of marketing and pulling the mom-and-pop [businesses] in. All the festivals are free, and they have the two big festivals—the German festival and the Christmas festival—that are huge,” Kissinger said.

Kissinger said the brewpub has been in the works for about three years, but city officials had been looking for a brewery for six years.

“Tomball’s a German town, and they didn’t have a brewery. This was always our choice for a town because they needed it,” he said. “The reception has been awesome, and Tomball has been looking for a place like this.”

Additionally, Kissinger said he believes Fire Ant has started to draw people out to Tomball since its opening Oct. 5. He said the brewpub is open later than most places in the city, staying open until 11 p.m. on weekends and 9 p.m. on weekdays, which he believes will spur more nightlife in Tomball.

“It’ll be good for Tomball because that brings people in from other places, and there isn’t a lot of that here,” Kissinger said. “I plan to work with the businesses down here and have pub crawls and things like that in the future.”

“We were kind of in-the-know about some of the other communities that were sprouting up. We knew in advance that the population is coming here,” Lobel said. “People know that this is the growth corridor for development. Commercial [businesses] would not go in if they didn’t think they had the people to support it.”

Food truck parks and breweries share a similar attraction for food enthusiasts, said Matthew Sadler, owner of Shiloh’s Food Court, which is slated to open in Magnolia in mid-November.

“Inside of the restaurant and food truck industry, it’s been a bit of a cultural change [toward] these craft beers and food trucks,” Sadler said. “There definitely seems to be a very strong following. We’d just like to be part of that.”

“This is a fast-growing area with the highways coming through here. There’s a lot of Tex-Mex-style restaurants, and the food truck park gives more entertainment plus a lot of food options in one place,” Sadler said.

City Council also recently approved a permit in October for a food truck park along Business 249. The park is expected to have 13 food trucks and other amenities. No opening date has been released.

Tomball Mayor Gretchen Fagan, who owns 403 Eats, said the food truck movement has taken on a life of its own in the last 10 years because food trucks offer more gourmet options now, which makes them popular with food enthusiasts.

“People are attracted to the fact that [food trucks] are so much different than what we grew up thinking of food trucks. We grew up thinking about a truck stopping at a construction site and that kind of thing,” Fagan said. “People like the gourmet options.”

“It was created as a marketing tool as well as an economic driver for the city,” Baxter said.

Business owners and Tomball officials agreed the rapid restaurant growth may shift culture and add nightlife within the city.

Baxter said eateries like Fire Ant Brewpub offer a calmer nightlife that suits Tomball and Magnolia. He said he believes residents would love to see more brewpubs, breweries and wineries come to Tomball while still maintaining the small-town feel of the area.

“[More nightlife] would be pretty awesome attractions along with the mom-and-pops that we have here,” Baxter said. “As long as things continue on the east side of [Hwy.] 249 the way they have been and we maintain the feel and friendliness of Tomball, I think it will be great because it’s a good combination and balance.”

Lobel said she believes it will be a while before the culture will change, but there may be pushback from long-time residents. She said it is important for business owners to be transparent about their intentions.

“From a business owner standpoint, you have to be sensitive to the people who have lived here forever and not just come bulldoze your way in, but [the culture] will definitely change,” Lobel said. “Growth is inevitable everywhere, and you can’t stop it.”

Justin Haecker, Tomball resident and owner of Bexar County Brisket—a vendor at the Tomball Farmer’s Market—said the Tomball and Magnolia areas have lacked any kind of nightlife until now, but the communities are attractive because of their small-town feel.

“People move here because of the small-town atmosphere, not in spite of it, but it’s still important to have a nightlife scene here,” Haecker said.

Blue said she hopes the growth and new eateries will change the evening culture in Tomball and Magnolia.

“I love the way it’s been, and obviously that’s the charm of it. But it also could use a fresh breath of something else where you bring in that nightlife, but a different version of that typical nightlife,” Blue said. “People want a nightlife, but I don’t think it’s necessarily a crazy party nightlife.”