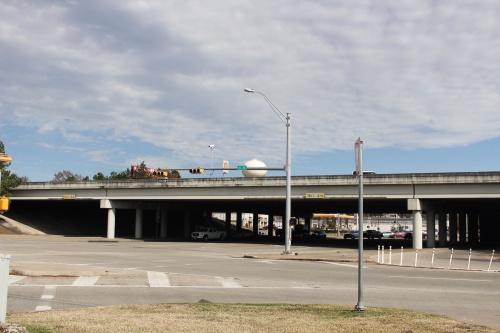 TxDOT will close the I-45 southbound mainlanes at Rayford and Sawdust roads, Jan. 18-21.

Updated Jan. 15 at 2:52 p.m.
The Texas Department of Transportation has rescheduled the total closure of the I-45 southbound mainlanes at Rayford and Sawdust roads to next weekend, Jan. 25-28, TxDOT Public Information Officer Emily Black announced Jan. 15. The closure was previously scheduled for Jan. 18-21.

"Please note that the total closure of I-45 southbound at Rayford/Sawdust Road in The Woodlands has been rescheduled for this weekend to next weekend," Black said. "Forecasted weather conditions this weekend are too wet and cold to lay concrete."

Published Jan. 14 at 11:51
A total closure of the I-45 southbound mainlanes at Rayford and Sawdust roads is scheduled beginning Friday, Jan. 18 at 9 p.m., weather permitting, according to Houston TranStar. The lanes will reopen Jan. 21 at 5 a.m.

TxDOT began repairing the I-45 bridge at Rayford and Sawdust roads Jan. 2, which had been previously identified as Texas’ most-traveled, structurally deficient bridge by the American Road & Transportation Builders Association in 2014. The I-45 northbound mainlanes were closed during construction Jan. 11-14.

TxDOT Public Information Officer Emily Black said after the rating came out in 2014, TxDOT crews conducted an emergency repair, bringing the bridge back to satisfactory condition.

“We typically inspect bridges every two years, and in 2016 and 2018 the bridge was rated satisfactory, actually with decently high scoring of 84 on both sides of the bridge in the last inspection,” she said.

“The project goal is to maintain and preserve the roadway and to ensure its safety in the future,” Black said.

Black said locations that will see closures during the two months of construction include the U-turns at Rayford Road and the mainlanes of I-45 both north- and southbound.

Black said motorists can stay informed of lane closure throughout the project’s duration by monitoring the Houston TranStar website at www.houstontranstar.org.
SHARE THIS STORY