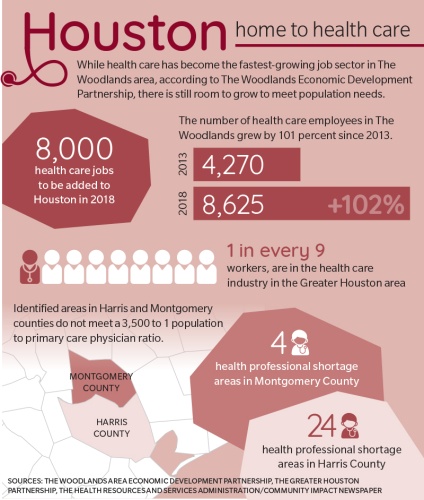 Home to the largest medical center in the world, Houston has long been known as a destination to receive and work in health care. However, with several major hospitals and health care facilities, The Woodlands area is quickly growing its own health care hub.

In The Woodlands area alone, health care employment increased by nearly 102 percent over the last five years, from 4,270 jobs in 2013 to 8,625 jobs at the start of 2018 due to expanded labor forces at area hospitals, said Laura Lea Palmer, vice president of business retention and expansion for The Woodlands Area Economic Development Partnership.

“Health care is our fastest-growing industry,” Palmer said during The Woodlands’ Economic Outlook Conference on Feb. 16. “From 2013 to 2018, we more than doubled our health care jobs in that short amount of time.”

To prepare for the number of jobs needed, higher education institutions—including Lone Star College System, Sam Houston State University and the University of Houston—are moving into the area or adding programs to educate the next generation of health care workers.

In November, UH announced it will create a College of Medicine to open in 2020 at its downtown campus to serve the Greater Houston area, where the population is growing faster than the number of physicians per capita.

“Houston definitely has the clinical capacity to support another medical school,” said Dr. Stephen Spann, planning dean for the UH College of Medicine. “There are many practicing physicians in our community who are interested in teaching medical students, and a number of federally qualified health centers … willing to be training sites for medical students as well.”

Harris and Montgomery counties have a total of 28 health professional shortage areas, or areas that do not meet a 3,500 to 1 ratio of population to physicians, according to the Health Resources and Services Administration, an office of the U.S. Department of Health and Human Services. Areas such as east Montgomery County and around Beltway 8 are lacking services, according to HRSA data.

In addition to the region’s growing need for primary care providers, the Texas Workforce Commission projects nursing will be in demand over the next 10 years. The Gulf Coast region, including Houston and The Woodlands, is expected to see 6,645 job openings annually for varying nursing positions.

The University of Texas MD Anderson Cancer Center, currently housed in CHI St. Luke’s Health The Woodlands Hospital, is also constructing an outpatient clinic in The Woodlands, set to open in spring 2019, which is expected to bring more health care workers to the area.

While employees are in demand, area hospitals are looking for higher levels of education for incoming nurses, spurring local entities to get involved.

“Hospital accreditation agencies have been recommending that hospitals and medical centers hire more [employees with a Bachelor of Science degree] for the last 10 years,” LSCS Chancellor Stephen Head said. “At the moment, there are approximately 2,000 registered nurses who will need the BSN degree for future professional development and employment.”

The passage of Senate Bill 2118 in June 2017 enabled the Texas Higher Education Coordinating Board to authorize baccalaureate degree programs from public junior colleges in the fields of applied science, applied technology and nursing. Lone Star College-Montgomery will begin offering classes leading to a BSN degree beginning in fall 2019.

LSCS anticipates initial classes of 30-60 students in the nursing program. Head said most of the students who will enroll in the program are already working in area hospitals like Memorial Hermann The Woodlands Medical Center.

Giegerich said educational partnerships not only help to educate students, but they give hospitals a chance to be involved in training nurses that could one day work in a local hospital.

“The primary importance is that they have the opportunity to train or educate future nurses in what is really happening in the acute care environment. This gives the student nurse an opportunity to see what that feels like,” she said. “The hope being, with this academic partnership, these nurses will graduate with experience, fit for their boards and then come back and join us as employees in our residency program.”

“Students ride in our ambulances to gain experiences in the field, [and] we are able to assess those students and see who would make good candidates for positions at MCHD,” he said.

While a bachelor’s degree is not a requirement for nurses to receive licenses, Giegerich said nurses who do have one will have a better chance of being hired.

LSCS students enrolled in the BSN program will pay the same tuition as other LSCS students, Head said, allowing students to save money and study close to home while pursuing nursing careers.

“We know our local hospitals hire RNs who graduate from LSC,” Head said. “The BSN program at LSC is a win-win for the community and for the nurses who already live and work here. We also know that nurses are in high-demand and where better to train them than their local community college?”

Additionally, SHSU’s School of Nursing announced last year it will relocate from the main campus in Huntsville to The Woodlands Center this summer. The school offers programs in prenursing and a BSN degree for RNs and licensed vocational nurses, or LVNs.

“There are many benefits to fully relocating the School of Nursing exclusively to The Woodlands Center,” said Emily Schulze Binetti, SHSU associate director of communications. “The close proximity of The Woodlands Center to clinical partners makes it easier for students to travel to and from campus to their clinical rotation locations.”

Of 66 students who responded to the SHSU School of Nursing Exit Survey that is administered to students at the end of their final semester, 83.3 percent were employed upon graduation, according to SHSU data.

The program has been in the works since 2015. If approved, it would be located in Conroe’s Grand Central Park development near I-45 and South Loop 336 with a projected opening for the fall 2020 semester.

According to SHSU officials, the new college will help meet the needs of the East Texas region, as 80 percent of Texas counties are designated “medically underserved.” As of late January, the college had 15 confirmed affiliation agreements for residency training programs with hospitals in predominantly rural areas.

The UH School of Medicine is slated to begin enrolling in 2020, following accreditation from the THECB.

“The Greater Houston area has grown significantly since the UT-Health—now known as McGovern—medical school was started in 1972, from around 2 million population then to around 6 million now,” Spann said. “We anticipate developing interprofessional teams [with] leaders in these communities to develop specific projects aimed at improving specific health and health care problems that the community views as important and wishes to work on improving.”