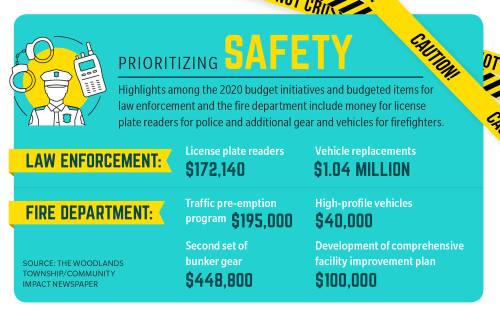 Highlights among the 2020 budget initiatives and budgeted items for law enforcement and the fire department include money for license plate readers for police and additional gear and vehicles for firefighters. The Woodlands Township’s fiscal year budget 2019-20 includes fewer overall expenditures than the 2019 plan, but several areas where budgeted amounts increased were in its law enforcement and fire department budgets.

Policing in The Woodlands is provided by the Montgomery County Sheriff’s Office’s Woodlands division and Harris County Precinct 4’s constable office. The township operates The Woodlands Fire Department. The initiatives funded in the FY 2019-20 budget include money for license plate readers, crisis response, vehicle replacements and equipment to improve fire response times, among other items.

Capt. Tim Holifield, who oversees The Woodlands division of the sheriff’s office, said the license plate readers are a good investment to allow the department to get more work done without deploying more officers.

“These assist us in thwarting crime,” Holifield said of the readers. “We know that many times people who commit crimes are traveling here. … [The readers] enable us to identify vehicles.”

Holifield said crimes of opportunity are an issue in The Woodlands because of its access to I-45 and other major roadways.

“People would come into The Woodlands Township and Montgomery County as a whole, commit a crime and perhaps try to immediately drive back south, to Harris [County] or other metro area,” he said.

In addition to the crime prevention and vehicle replacement initiatives, the township board also took crisis intervention training into account when formulating the budget.

“We asked for additional funding that will allow us to enhance training,” Holifield said. “As we all recognize, we only get the call when the crisis is at a breaking point. The better trained our personnel are, the more quickly we can recognize someone in crisis and get them help.”

The FY 2019-20 budget includes $64,000 to be split between the law enforcement and fire departments for crisis intervention training.

“[GPS is] smarter technology, and once it’s activated it returns intersections to normal operation a lot faster,” Adams said.

Current fire department response times are about 4 1/2 minutes, Adams said. The intersection signal program already has an annual budget of $100,000, but the amount budgeted in 2020 is $195,000.

“Mobility is becoming a larger problem in The Woodlands,” Adams said. “Anytime we interrupt the intersection, we want it to be able to return back to normal once we’ve gone through the intersection.”

Other budgeted items include $40,000 for two 5-ton, high-profile vehicles, which are used when residents must be evacuated in flooding situations. The vehicles are retired military surplus vehicles with low mileage, Adams said. The department currently has two 2.5-ton vehicles for those needs.

At $448,800, a budget initiative for a second set of bunker gear for firefighters was requested for firefighter safety and efficiency. It gives firefighters immediate access to fresh gear rather than having to wait for the cleaning and decontamination process.

The department also requested $100,000 for project planning for renovations, reconstructions and other needs.

“What we’re trying to put together is a look at our aging facilities,” Adams said. “We’ve grown since [facilities] were constructed; we have had some challenges with space available.”

Adams said the study will allow the department to look at the condition of its existing eight fire stations and provide recommendations to expand them or to make other improvements.