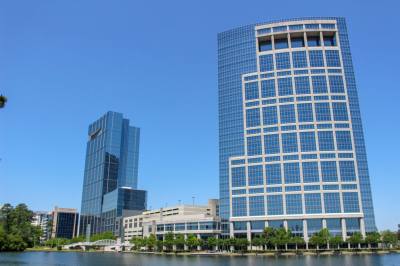 The Chevron Corp. announced plans in April to acquire The Woodlands-based Anadarko Petroleum Corp. in a deal worth $50 billion, and Houston-based Occidental Petroleum countered with a competing $57 billion offer, but local business and energy experts said it is too early to tell the effect a merger could have on the local economy.

Employing more than 3,600 people locally, Anadarko is The Woodlands’ second-largest employer in a region where 25% of the jobs are in the energy industry, according to The Woodlands Area Economic Development Partnership.

However, a Chevron spokesperson said if it wins the bid, it will maintain a presence in the area that has come to know Anadarko as an economic powerhouse and has dominated the area’s skyline with its two towers.

“We expect that after the deal closes, there will be a Woodlands presence, and there will continue to be a downtown [Houston] presence for Chevron,” Chevron spokesperson Kent Robertson said. “We should all expect that there will be changes, but it’s too early to know specifics.”

Regional economic experts said while an acquisition will likely not have major repercussions in the oil and gas industry, a shakeup could be felt locally.

“It’s an anxious time for employees and their families any time you have a merger or an acquisition,” The Woodlands EDP President Gil Staley said. “It can go with significant job increases, or it certainly can be impacted the other way with losses.”

Local business leaders said they are waiting for more information on how an acquisition could affect Anadarko’s workforce before jumping to conclusions.

“I know Anadarko’s been a great community partner. They’ve been involved in a lot of things in the community, and we hope Chevron steps up to the plate,” said J.J. Hollie, CEO of The Woodlands Area Chamber of Commerce, on April 12, the day the Chevron deal was announced.

Chevron maintains a local footprint in The Woodlands through the Chevron Phillips Chemical Company, a separate enterprise jointly owned by Chevron and Phillips 66. The company is headquartered at 10001 Six Pines Drive and employs 833 people, making it the area’s 13th-largest employer, according to The Woodlands EDP.

However, as of May 6, Anadarko announced it considered a proposal from Occidental to be of superior value. According to a letter from Occidental President and CEO Vicki Hollub to Anadarko, the company offered to acquire Anadarko for $76 per share, as opposed to Chevron’s offer of $65 per share. Occidental also received a commitment of $10 billion toward the deal from Warren Buffet’s Berkshire Hathaway Inc. if the acquisition goes forward, the company said April 30.

Anadarko did not respond to requests for additional comment on negotiations. As of press time, Chevron was within a four-day window of time in which it could present a revised proposal to negotiate a new deal with Anadarko.

Occidental did not immediately reply to a request for comment on its potential future presence in The Woodlands.

Robertson said the two energy companies will continue their regular operations until the acquisition is complete if Chevron wins the bid, and Chevron would involve some Anadarko workers in the merger.

Staley said The Woodlands EDP initiated an economic impact study after the acquisition announcement so the organization can begin analyzing scenarios that could result from the deal.

Hank Lewis, an economic professor for the Lone Star College System who studies oil and gas industries in the Greater Houston area, said the effect may depend on how the companies themselves are structured.

“It’s going to largely depend on how they consolidate their labor forces,” Lewis said. “The question is going to be, ‘Do they have a lot of redundant positions between the two offices or not?’ If there are not a lot of redundancies, it may have minimal impact.”

Staley said Anadarko’s presence has been beneficial both from an employment and philanthropic standpoint throughout its nearly 20 years in the area.

“[It] has done a tremendous job of bringing economic prosperity to the area,” Staley said. “Their philanthropic efforts have been a major impact on this community.”

The company came to The Woodlands in 2002, moving from Greenspoint near Beltway 8 and I-45. The two towers Anadarko built remain the tallest structures in The Woodlands area, Staley said.

Beyond the physical presence of the buildings, the company’s arrival in The Woodlands signaled a change in the region’s profile as an employment destination.

“When that first tower came out of the ground, it truly was an awakening for our community as a destination for major employers,” Staley said. “That 30-story tower reinforced this is a place to bring your headquarters or major operation.”

William Arnold, a professor in the practice of energy management at Rice University’s graduate school of business, said if Chevron acquires the company it could signal an opportunity for a new stage in the area’s evolution as an energy employer.

“It would be fun for The Woodlands to suggest to Chevron they move their corporate headquarters [from California] to The Woodlands,” Arnold said. “Except for employees of history, I don’t know why they would want to be headquartered in California; it’s hostile to the industry.”

Arnold said renewed negotiations with Occidental could change the deal.

“The [Anadarko] management/board presumably felt [the Chevron deal] was good in the short term because Chevron would have the resources to close the deal without much delay or challenge,” he said. “[Occidental] offered more cash than Chevron and with an infusion from Buffet may be able to improve the ratio even more.”

Gordy Bunch, chairman of The Woodlands Township board of directors, said the current concentration of energy industry talent in The Woodlands could pave the way for the merger to spell a greater, rather than reduced, industry presence in the area.

“Chevron noted in their early discussions that they recognize The Woodlands-based employment and visible assets within the facilities,” Bunch said.  “We’ll monitor, but we don’t have an ability to tell you what the implication would be … for all we know, they may shift more employees to the north.”

The future of oil and gas

Acquisitions like those proposed by Chevron and Occidental are not uncommon as efficiencies grow and the industry matures, said Patrick Jankowski, senior vice president of the Greater Houston Partnership, an economic development organization.

In the past 30 years, the Greater Houston area has seen the number of publicly traded oil and gas companies shrink from more than 400 to fewer than 150, in part because of these efficiencies, which have mostly taken a toll on white-collar jobs, Jankowski said.

“It’s a mature industry now. … It’s gotten very efficient; it doesn’t take as many people to find oil and gas as it used to,” Jankowski said. “You’re seeing more and more the industry [is] concentrated in fewer hands, but that’s been occurring over the last 30 years.”

Jankowski said the acquisition could spark other acquisitions by other companies that are trying to increase efficiencies.

“This single merger here isn’t going to have an impact on the oil and gas industry,” he said. “But other companies might start shopping around and looking for other companies they could acquire as well.”

Regional experts agreed that while the deal raises questions for Anadarko employees in the area and about how the energy industry will change in upcoming years, the changes could bring about long-term positive effects to the job market and the industry.

“It’s a difficult time for people; it creates a huge amount of uncertainty,” Arnold said. “It does create opportunity as well. … The fact that Chevron would pay a 40% premium for Anadarko speaks to the quality of the company, its portfolio and its people.”

The theater will celebrate its opening by offering $3 movies until June 23.