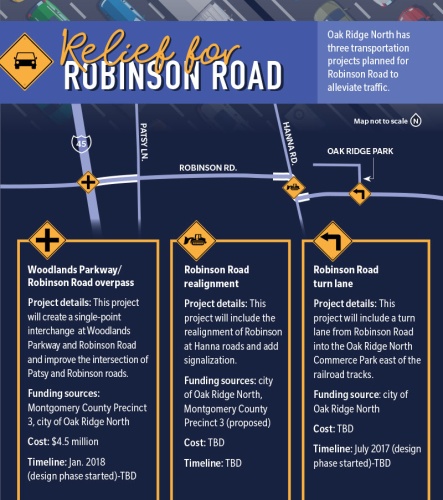 Oak Ridge North city officials said they have made changes to plans to alleviate traffic on Robinson Road, a major thoroughfare in the city that experiences traffic congestion on a daily basis.

While two of the projects—improving the Woodlands Parkway and Robinson Road overpass, and adding an additional turn lane from Robinson Road into the Oak Ridge North Commerce Park—are currently in the design phase, plans for the realignment of Robinson Road near Hanna Road have changed.

In June 2017, city council members approved a contract to partner with engineering firm RPS Klotz Associates to apply to the Transportation Improvement Program for funding assistance and preliminary engineering for the realignment of Robinson Road. The Houston-Galveston Area Council’s call for TIP projects is an opportunity for local governments and transportation agencies to compete for federal transportation project funding.

“We’ve had a couple meetings with TxDOT,” Durgin said. “They said the undivided Robinson Road is the killer part of the project. You have to add sidewalks, and they likely wouldn’t accept the drainage system as is. There are just a number of things that would probably double the cost of the project and add at least four years to getting the project under construction.”

Joe Sherwin, public works director for Oak Ridge North, said as a result of the realignment project not being suitable for the TIP program, he believes the project should be a county-assisted project rather than a state project.

“Don [Durgin] and I have been working this back and forth over the past two months, and we kind of know what council will go for and what you want based on the temperature of the project and the community,” Sherwin said. “We’ve been working towards doing design with county [specifications] in mind, and we’re still going towards a county-assisted project. That’s been the direction. We knew TxDOT would be a long shot after meeting with them.”

City council members unanimously agreed with Sherwin and voted to change the manner of funding, citing that no other options were available for the project.

City Manager Vicky Rudy said while the project is not likely to receive state funding, the realignment of Hanna at Robinson roads and adding signalization is still needed and would greatly improve traffic for the city by reducing delay times for drivers. Rudy said traffic remains an issue on Robinson Road because there still remains only two ways in and out of the developing community east of I-45 in South Montgomery County.

“Realigning and putting a signal in at Hanna and Robinson roads would solve 75 percent of the problem,” Rudy said. We’ve been talking with [Montgomery County Precinct 3] Commissioner [James] Noack, and it’s been a positive conversation but still early. It’s our current best opportunity to solve the problem faster than the TIP program.”

The intersection, which currently controls traffic with stop signs, is defined in the South Montgomery County Mobility Study as “severely overcapacity” because traffic exceeds the roadway’s capacity at peak hours.

During a traffic count on the intersection in 2017, Robinson Road between I-45 and Hanna Road had a count of 16,170 commuters daily, while the capacity of the road is set at 17,800 vehicles per day, according to the Highway Capacity Manual, a publication by the Transportation Research Board.

Meanwhile, during a traffic count study in 2017, Woodlands Parkway between I-45 and Grogan’s Mill Road had a count of 63,859 commuters over 24 hours, while its capacity is set at 55,300 vehicles per day.

Rudy said the county is expected to finish the design of Phase 2 by the end of 2018, and it will be the main general fund project for the city next year.

“We’ll finish Phase 2 the rest of this year, and Phase 3 will begin in October,” Rudy said. “It’ll [cost] $350,000 from the unrestricted general fund in the capital improvement budget. We do have an interlocal agreement with the county to reimburse us for phases 1 and 2, which is about $240,000. It’s the main project in here for the general fund side of the capital improvements.”

The third improvement to the thoroughfare will be the Robinson Road turn lane into the Oak Ridge North Commerce Park, which city officials said is hard to turn in to due to traffic congestion.

The final design for the turn lane has been completed, and funding is expected to come from the Oak Ridge North Economic Development Corporation. However, Rudy said the project has been put on hold until more can be determined about funding and a timeline for the Robinson Road realignment project.

“The EDC and the [tax increment reinvestment zone] would be part of our creative financing,” she said. “Once we know what’s happening with the realignment project, we can pursue funding for the turn lane project.”
SHARE THIS STORY