The Grand Parkway Segment G from I-45 to Hwy. 59 officially opened in late March.

Public officials from Harris and Montgomery counties attended a luncheon and a ribbon-cutting ceremony March 29 to celebrate the completion of the 13.7-mile road project.

“The newest segment of the Grand Parkway illustrates foresight, leadership and vision,” said Bill Hale, Texas Department of Transportation chief engineer. “Since 1960, various folks have authored and put together a well-crafted facility with engineering and marketship, and leveraged funds, resources and political will to get across the goal line, which is the envy of nations.”

Texas Transportation Commissioner Jeff Moseley said in 1910 there were 14,000 automobiles in Texas. Now, in the Greater Houston area alone, there are 6 million cars on the roadways.

“Because of our dependence on this wonderful invention of technology, we now see the reverse of that is congestion and gridlock,” Moseley said.

Moseley said since the opening of the other Grand Parkway segments earlier this year, residents have called to comment on how much time is shaved off their commute from I-10 to The Woodlands area.

“The Grand Parkway today will give back a huge return on investment,” Moseley said. “It will give us back this miracle of time savings.”

Hale said building corridors like the Grand Parkway help drivers willing to pay to use the toll road as well as those who choose not to because traffic is better dispersed when more roads are available.

Mosely said he is excited to see taxpayer dollars put to work in the private sector to make the Grand Parkway a reality.

“The catalyst that really triggered and made this segment of the parkway really become a reality was economic development related to the ExxonMobil campus coming to this region of the state,” Moseley said.

The connector from the Grand Parkway to the Hardy Toll Road will be completed during summer 2017, according to the Harris County Toll Road Authority.

The three newest sections of the Grand Parkway extend 38 miles from Cypress to New Caney. 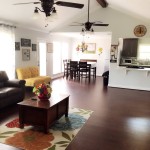