The Woodlands area has seen an increase in both home sales and prices since 2020, including areas like this street in Sterling Ridge. (Ally Bolender/Community Impact Newspaper)

In her 42 years of experience in the real estate industry, Vicki Fullerton, a RE/MAX The Woodlands & Spring real estate agent, said she has never seen a real estate market like the current one.

The Woodlands area has reached a record-low inventory for single-family homes following a mostly downward inventory trend since April 2020, and the median price of homes sold in The Woodlands area in May was $405,000, up from $288,000 during the same time in 2020, according to Houston Association of Realtors data.Homebuyers and sellers are not the only ones experiencing a rise in prices as homebuilders and developers have seen a greater cost of building materials over the past year.

According to Fullerton, a member of Texas Realtors, a major cause of the surge in homebuying was the COVID-19 pandemic through 2020 and early 2021 as people realized a need for more space.

“The inventory is as low as I have ever seen it,” Fullerton said. “The pandemic changed people’s housing requirements and desires. ... People are moving to Texas on a daily basis, and interest rates are low.” 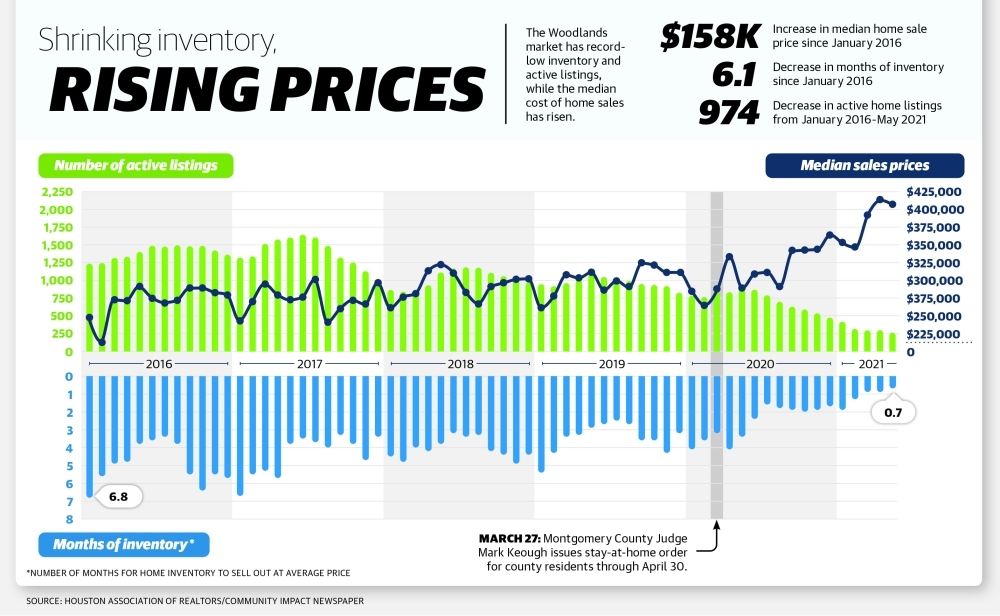 Among factors affecting the real estate market, the number of active homes on the market in The Woodlands area dropped to an all-time low following a downward trend that began in May 2020, dropping from 1,087 homes available to 263 in May 2021, according to HAR data.

“A lot of homes are on multiple-offer situations right now,” Fullerton said. “This particularly impacts first-time homebuyers. They cannot compete with cash offers. ... They do not have that kind of discretionary income.”

Fullerton said the market for homes costing around $250,000 is difficult to get into at this time.

Realtor Jennifer Sims and broker-associate Jack Allen, both of Allen Sims Real Estate Group in The Woodlands, said the biggest shift in the market has been for homes priced at around $750,000, which has seen a surge in demand and is affecting the rest of the market around Houston.

Fullerton said it is also beginning to affect the townhome market.

“The prices are going up. New construction is increasing because of the cost of labor ... for new homes. Construction dates are getting moved back from six to eight months up to 12 months,” Fullerton said. “It is just an incredibly difficult market.”

The demand for new homes has caused some residential builders to slow down homesite sales into phases.

Builder Taylor Morrison is offering $1 million-plus custom townhomes in the East Shore neighborhood in The Woodlands. Taylor Morrison officials said the company is phasing releases to a limited number of homesites for sale approximately every month.

“This new cadence helps to reduce the strain on our construction teams, trade partners and the supply chain and allows us to maintain our high customer service standards,” according to the company website.

Sims and Allen said they have heard builders report they are having to place cash buyers on waitlists and turn down those looking to build a home from the ground up due to building costs and the demand for new homes.

“It is a seller’s market, but there is a lot to be concerned about,” Fullerton said. “Once a seller sells their house, where are they going to go, and what are they going to buy? It is incredibly difficult right now to find a property that does not have a multiple-offer situation.”

During a business advocacy meeting at The Woodlands Area Chamber of Commerce on May 21, Dahlia Brown, field operations director for Texas Realtors, said The Woodlands has become an anomaly in the area for commuters. 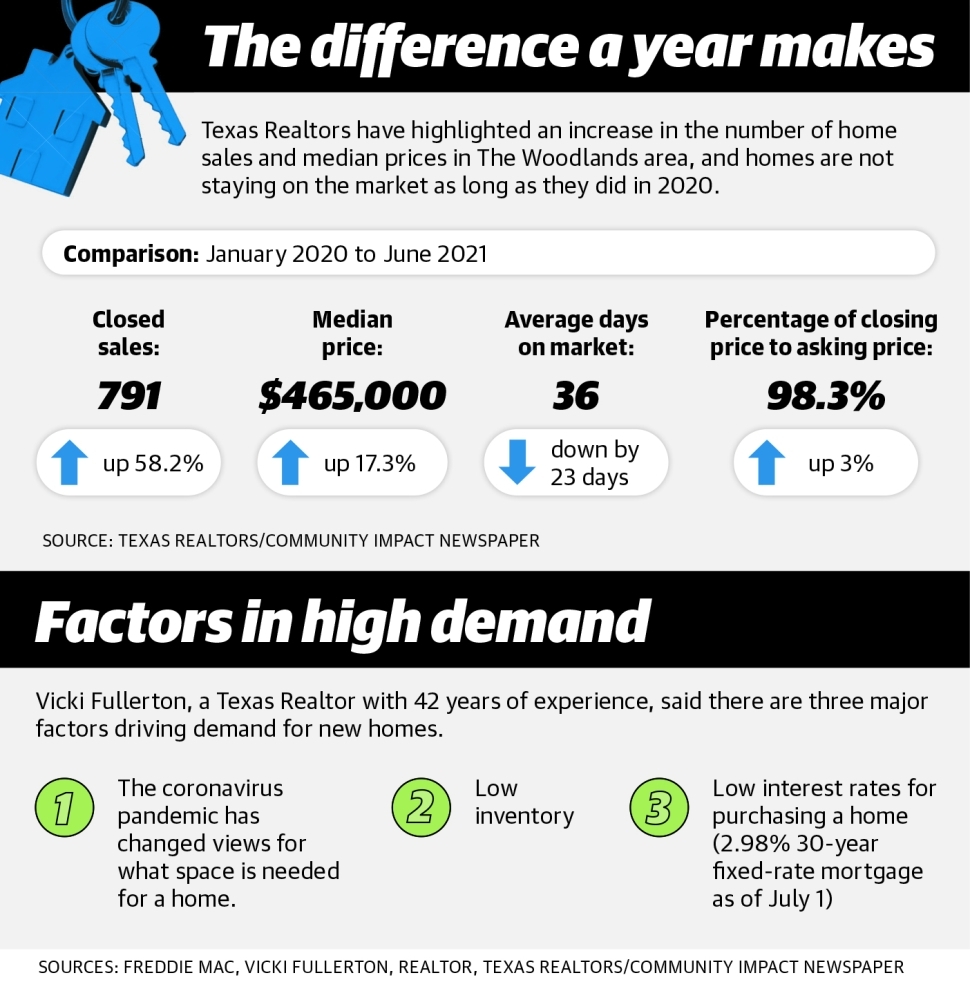 “You have so much more industry here,” Brown said. “People used to live in The Woodlands and only commute to Houston, but that does not exist anymore. What is interesting to me is that people are now living north of The Woodlands and commuting here.”

Brown said the reason people are living outside of The Woodlands is because homes are more affordable north of the township.

“The Woodlands is starting to build out its plats, and we are getting full,” Brown said.

According to developers The Howard Hughes Corp., the only portions of The Woodlands where single-family home development is still underway are Creekside Park and East Shore, where a few hundred homesites remain. Additional development in the area is concentrated east of I-45, where communities such as Harmony, Bender’s Landing and Imperial Oaks are still building out hundreds of homes in master-planned communities.

As the prices of homes continued to climb over the past year, some attendees of the May 21 meeting expressed concern about the cost of living in the area. According to the latest U.S. Census Bureau data from 2019, the median household income in The Woodlands area was $122,634, and the average cost of a home at the time was $374,200 with rent in the area averaging $1,566 per month.

Another factor for the increasing prices of homes is the cost of building materials, according to a June report from the Texas A&M University Real Estate Center.

According to the report, the demand for housing rapidly drove up the price of lumber for area builders.

Homebuilding, remodeling and the manufacturing of home furnishings are the biggest drivers of the demand for lumber, according to the report.

Daniel Moon, vice president of developers Sam Moon Group, said the increased cost of lumber was one of the biggest concerns about building The Residences at Metropark, a 324-unit multifamily project coming into Metropark Square in Shenandoah, which will begin construction later this year.

“Building costs have been going up,” Moon said. “We keep costs in any way we can, but a lot of times what it comes down to is if the project pencils out still. If it does not, we have to look at putting the project on hold, canceling the project or bring in a different project.”

Moon said for The Residences at Metropark, Sam Moon Group had to keep track of the rates for multifamily rentals alongside the increasing building costs to confirm the project will still be moving forward.

Other industries have been affected by rising costs for home renovations. Janet Lipari, a sales and design representative of Regal Pools, said the costs of materials for pool installation has risen as well.

“We have seen increased prices across the board with labor, ... concrete and plumbing materials have gone up, particularly after the freeze,” Lipari said. “We are also now having trouble getting the materials from overseas. They are all backed up from [coronavirus], and now there is demand.”

Lipari said her business has seen around a 20% increase in demand for pool services compared to around two years ago.

“We do not see any kind of slowing down at all,” she said.

Ally Bolender contributed to this report.