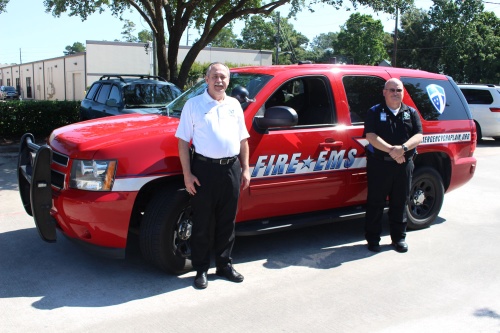 For almost 20 years, the Emergency Chaplain Group has offered spiritual and emotional assistance to a demographic not often considered in mental health discussions: first responders.

According to Paul Tabor, the managing director and senior chaplain, part of the difficulty for first responders to open up about the stressors of their jobs is because others might not understand what it is they are going through.

“If you know anything about first responders … we tend to be a pretty closed group and stay within ourselves,” Tabor said. “As far as seeking behavioral issues, we tend to not trust anybody outside of ourselves.”

Since its inception in 1998, Emergency Chaplain Group has grown and expanded its services. The organization moved to its current address in The Woodlands area from its previous Spring location two years ago. According to Tabor, the organization now serves 43 agencies across 54 counties across Texas.

“We try to keep it really simple with these agencies,” he said. “Most of the time, it says, ‘We appoint Emergency Chaplains to be our chaplains.’ A couple of years ago, we also became the first responder partners to the [Post-Traumatic Stress Disorder] Foundation of America.”

Emergency Chaplain Group has also partnered with the Firefighter Behavioral Health Alliance out of Arizona, which largely focuses on researching suicide prevention in the firefighter community.

The organization originally started working with volunteer chaplains but has expanded to offering full-time, paid positions. The branch that serves The Woodlands area has two full-time chaplains and six volunteers.

The primary goal of Emergency Chaplain Group is to give support to first responders who are struggling with the pressure of their duties. Tabor said appointments can be made for a first responder to come to his office on Spring Hill Drive, or chaplains can be sent out for more immediate assistance.

“We see ourselves primarily as a gateway to their employee assistance program,” Tabor said. “We deal with the acute, immediate problems and short-term things. If it’s long-term help they need, we refer them to the proper mental health people. We have a couple of agencies around here that deal primarily with first responders, so it makes them feel comfortable going to those as well.”

Chaplains can help first responders in a variety of ways. According to Tabor, the group has a hotline number that is staffed around the clock for immediate assistance, appointments can be set up to come into the office, chaplains can be dispatched to the scene of an incident, or a chaplain can come to a firehouse or police department and have a private conversation.

Throughout his six years with Emergency Chaplains, Tabor said he has seen the group’s impact firsthand.

“We have so many testimonials of people we have helped that said we have put their marriages back together and who have said they were thinking about killing themselves and they got help for it,” Tabor said. “We get into this line of work for altruistic motivations. We just want to help people … and there’s a toll to seeing death over time, and that starts to build up. If we can train people ahead of time … if they decide to leave fire service or law enforcement, they can do it on their own terms.”