Montgomery County ramps up vaccination distribution in first quarter of 2021

Montgomery County officials said they are working toward a goal of vaccinating as many residents as possible against COVID-19 as vaccines become more readily available.

As of early March, the county had received around 172,000 doses from the state, and 46,673 area residents were fully vaccinated, according to information from the Texas Department of State Health Services. However, the county anticipates receiving enough doses to begin vaccinating around 6,000 area residents per day starting in March, said Jason Millsaps, executive director of the Montgomery County Office of Homeland Security and Emergency Management.

This is due, in part, to the county’s $130,000 operation approved Feb. 23 that will consolidate the three primary vaccination locations countywide to one hub at Woodforest Bank Stadium in Shenandoah, Millsaps said.

Millsaps said he believes taking over operations at Woodforest—which supplied around 14,000 doses during two mass vaccination events hosted by Memorial Hermann The Woodlands Hospital in February—and consolidating all efforts to one central site should ease issues caused by vaccinations at multiple locations.

The other hubs—the Montgomery County Fairgrounds and CHI St. Luke’s The Woodlands Hospital—will remain operational until those who received their first vaccinations there receive their second shots.
RELATED STORIES

“At the fairground/airport location we have had huge success. The facility and traffic flows wonderfully as planned. It has been executed as planned with military precision and Chick-fil-A efficiency,” Millsaps said.

Among the issues facing a timely vaccine rollout is a limited supply coming from the federal and state levels, along with traffic issues caused by the number of people seeking appointments at vaccine hubs located off of the heavily traveled I-45, officials said.

Health care officials have also expressed concerns with how long it will take to reach the percentage of the population required to achieve herd immunity. Montgomery County has a population of 607,391 people, according to 2019 American Community Survey data from the U.S. Census Bureau.

“At St. Luke’s, traffic has been the biggest problem,” Millsaps said. “The intersection of [Hwy.] 242 and I-45 is already one, if not the most, traveled intersection in the county daily, and when you add thousands of cars to the mix for a vaccine it will only exacerbate the traffic issues.” 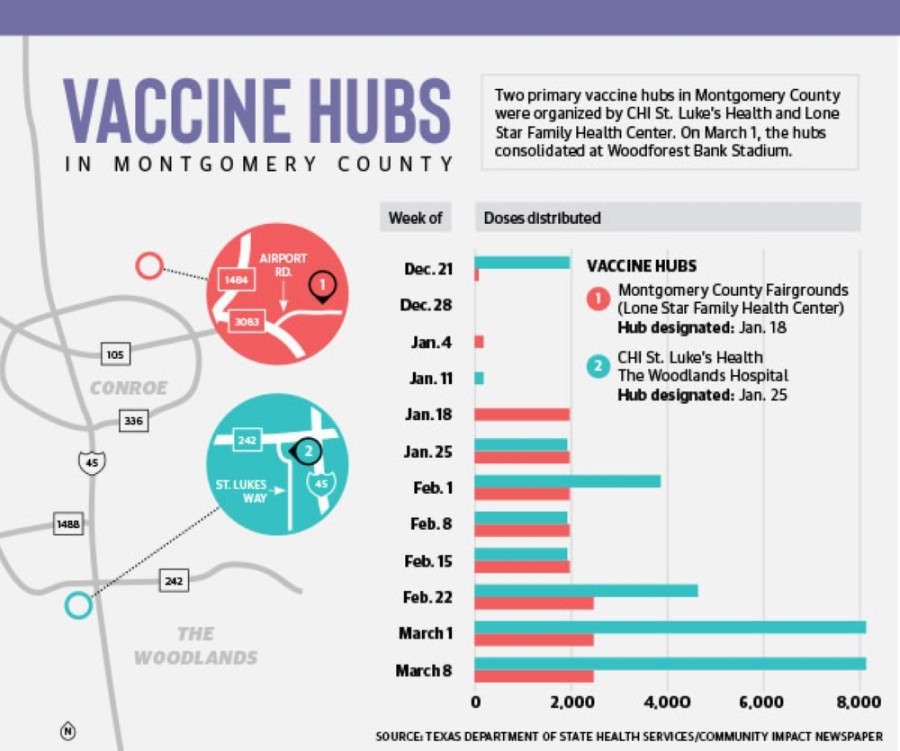 Additionally, reports to Montgomery County Commissioners Court throughout February indicated there had also been several issues with the vaccination registration and distribution process. During a Feb. 9 meeting, Millsaps said operations had been slowed down due to processing registration paperwork.

“Right now, for every day our sites are open, our partners are spending three to four days documenting and going through the paperwork,” Millsaps said. “It is slowing down operations. We are required to do it in 24 hours, and we are not hitting that mark because it is a gargantuan task.”

Because the process had been slowed down initially, the commissioners approved using around $285,000 from county funds at a Feb. 9 meeting to update the registration software the county and its partners use, which verifies the eligibility of each patient for the vaccine, gathers medical information, sets each patient on a waiting list and assigns appointments.

According to DSHS press officer Douglas Loveday, vaccine allotments are released from the federal government, and as of Feb. 24, supplies remained limited.•“However, vaccine allocations have remained steady and increased some recently, so that’s good news for Texas,” Loveday said. “Also, the introduction of [the Johnson & Johnson] vaccine into the supply chain could be significant for Texas. But currently, we don’t receive enough vaccines to allocate to all of the Texas providers that want the vaccine.”

Two-dose vaccinations available to the public are produced by Pfizer and Moderna, and the single-dose Johnson & Johnson vaccine was approved by the U.S. Food and Drug Administration on Feb. 27.

As of early March, Loveday said the groups prioritized to receive the vaccine across the state are health care workers and long-term care facilities and their staff, who qualify under Phase 1A of the state’s vaccine priority rollout. People who are 65 and older, younger than 65 with a chronic condition that could result in serious illness or death from the coronavirus, and teachers qualify under Phase 1B, which began receiving vaccines Dec. 17. As of March 15, people age 50 and older qualified as Phase 1C of the rollout.

Loveday said the target population for these first two phases number in the millions across the state. Discussions are being held about what Phase 1C will include, according to Loveday.

Dr. David Lakey, a Texas Medical Association COVID-19 task force member, said on March 2 targeting specific demographics had allowed the state to vaccinate around 40% of Texans age 65 and older as of that time.

“This is a big initiative trying to get a new vaccine administered quickly in a large state. We should anticipate that there’s going to be some challenges,” Lakey said. “I am still amazed that we are just barely a year into the outbreak of [COVID-19] and have a vaccine that we are administering right now.”

As of March 5, around 39,000 people of the Montgomery County population in the primary target demographic had received at least one dose of the coronavirus vaccine. 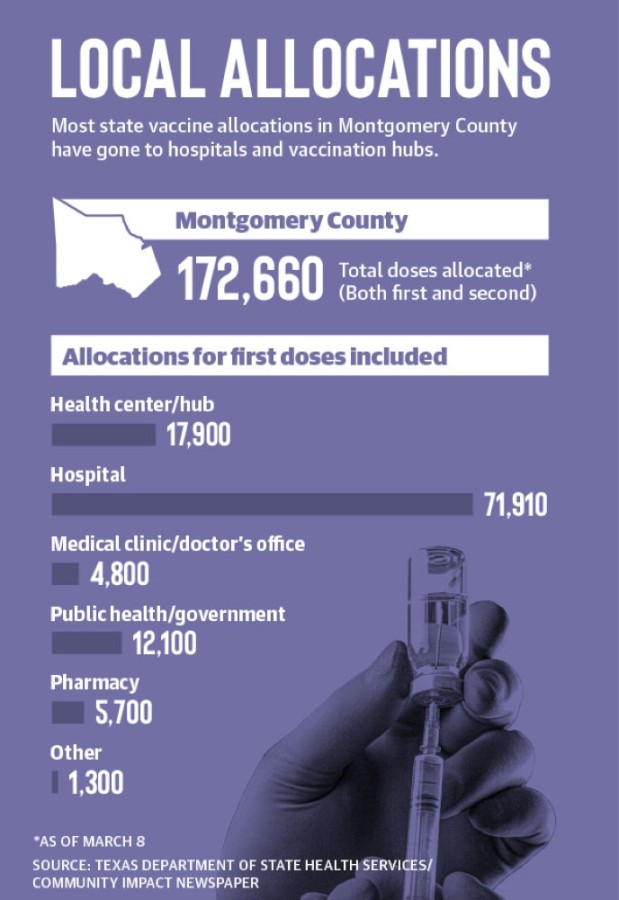 Lakey said while he believes immunizing targeted populations has been going well so far, there are still things that can be done better with the rollout.

“We need to get better data back related to ethnicity of individuals that have been immunized to make sure that we are being as fair as possible with the vaccine,” Lakey said.

Millsaps said the goal in Montgomery County is to get as many people vaccinated as possible, but he added the program will always remain voluntary.

“We have asked the state to triple our allocation at our providers due to our ability to handle the volume,” Millsaps said. “We don’t have specific weekly or monthly goals because that will depend on how many doses we are allocated, and that data comes out weekly and varies based on supply.”

According to Lakey, the number of vaccines being distributed has been increasing on a weekly basis, and the state was nearing 1 million per week as of early March.

“It looks like supply is revving up, and so I am pleased that we are reaching that kind of level now in the state,” Lakey said. “I think within a matter of several months, we will be able to change this whole conversation and be in a situation where those that want the vaccine will be able to get the vaccine.”

Loveday said the plan at the state level will still involve prioritizing vaccination hubs, as they are capable of mass vaccinations and can help the most people. He said eventually the goal is to begin providing smaller, nonhub providers around the state as the vaccine supply increases.

Lakey said he would like to see the state reach herd immunity, which will require around 80% of the population to be vaccinated or obtain immunity to the virus naturally.

Information from the Texas Department of Health and Human Resources indicates neighboring Harris County, where the population tops 4.7 million, has a total of 363,747 people completely vaccinated, or about 7.7%.

Gov. Greg Abbott cited the increased distribution of vaccinations as the primary reason to lift the state’s mask mandate March 10.

“It’s going to take a little bit of time to get through the rest of these groups. In the meantime, we need to continue to do these simple things [such as] wearing masks,” Lakey said. “And I say ‘physically distancing’ and not ‘socially distancing’ and being careful until we get into a better position with the virus right now.”

Texas A&M University virologist Benjamin Neuman said the removal of the mask mandate presents new challenges to achieving widespread immunity, as it may allow more opportunities for the virus to mutate and become resistant to current vaccines.