The Woodlands area has largely been spared the widespread, catastrophic flooding seen in parts of the Greater Houston area in events such as Hurricane Harvey, but officials said now is the time to act to prevent those scenarios from unfolding in south Montgomery County.

Officials and scientists studying regional watersheds said previously dry areas could find themselves at risk as flood plain information is updated based on new rainfall data and ongoing studies suggest land sinkage, or subsidence, could increase the likelihood of flooding in previously unaffected areas.

“Subsidence can shift the flood plain,” said Margaret Cook, a research associate with Houston Advanced Research Center. “People who didn’t have impacts previously would now have them.”

This year, several projects that aim to reduce that risk in south Montgomery County have received financial backing to study or begin work. The projects range from short-term local roadway drainage improvements to a potential $300 million regional reservoir for Spring Creek that officials have said would take 15 years to be completed if it advances. Officials have said the project would likely be funded through the U.S. Army Corps of Engineers, and state and federal grants.

“Time is the enemy of disaster mitigation,” said Laura Norton, a member of The Woodlands Township’s One Water Task Force, which oversees the discussion of issues from drainage to groundwater withdrawal. “It does take a long time for the slow ways of government to get something done. For folks that are victims, I can’t imagine how frustrating that is.”

Before hurricane season started June 1, the Greater Houston area was inundated with rain in May, although no major flooding was reported in Montgomery County.

“You kind of hold your collective breath every time you see a possible storm forming out in the Gulf because if we get the same circumstances as Harvey the likelihood is we will have structural flooding,” said Bruce Rieser, the chair of the One Water Task Force and the vice chair of the township’s board of directors.

Although structural flooding was not a widespread issue throughout The Woodlands during Hurricane Harvey in 2017, portions of the township are vulnerable, Rieser said.

One local project expected to start this year is a drainage project in the area where Bear Branch and Panther Branch waterways meet. Parts of Research Forest Drive running through that area frequently become impassable, officials said.

The Texas Water Development Board approved funding in May for the $11.3 million project in the form of $10.17 million in interest-free financing and $1.13 million in grant funding to Montgomery County Municipal Utility District No. 67, according to the TWDB.

When completed, the project will reduce residential flooding around The Woodlands High School and keep Research Forest Drive open during major rainfall events similar to Hurricane Harvey, the Tax Day flood in 2016 and the Memorial Day flood in 2015, said Jim Stinson, general manager of The Woodlands Water Agency, which manages the 10 MUDs in The Woodlands.

“[We’re] really excited about this, and it’s a long-standing issue that I think will bring significant relief to those areas clustered around Research Forest and will really help people,” Stinson said.

Stinson said a funding agreement should be in place within three or four months, and neighborhood meetings will be held in areas that will benefit from the project. The design, approval and construction process will take one to three years, he said. 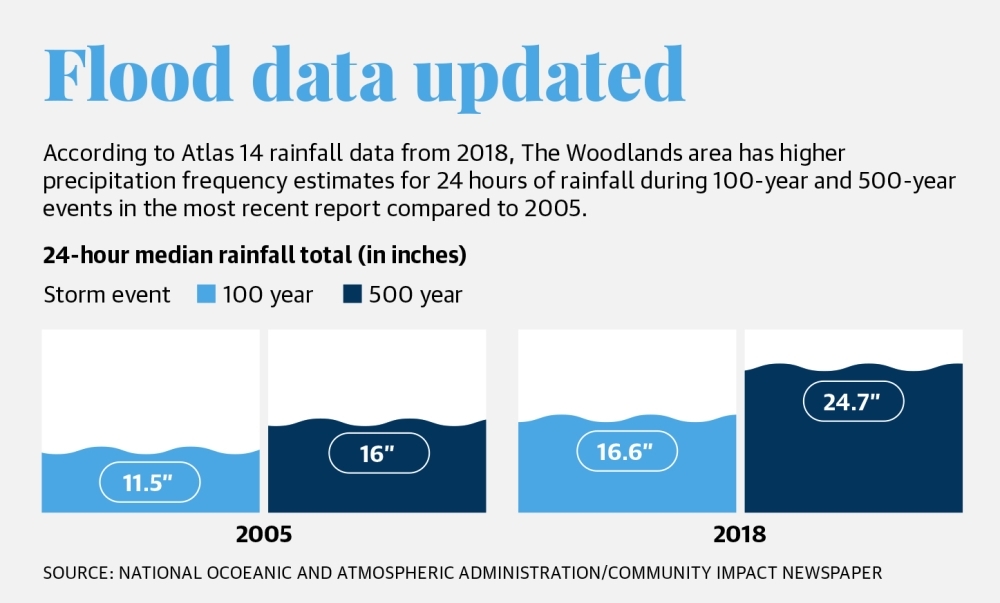 Among other projects in the region, a road project in Shenandoah geared toward improving drainage on David Memorial Drive has been in discussion since 2014, and officials said in May it is expected to begin work in January 2022. The project will improve drainage by extending the north-south road and its drainage to Hwy. 242. Although complete funding for the project has not yet been secured, $2 million of the approximate $8 million needed will come from the 2015 Montgomery County road bond, officials have said.

“The road is designed to keep lanes above the base flood elevation to allow a passable northbound corridor from Tamina [Road] to Hwy. 242 during flooding,” said Joseph Peart, public works director for the city of Shenandoah.

In Oak Ridge North, plans underway include projects to improve drainage on Robinson Road and in the city’s planned Plaza District north and south of that road. The city also completed the first phase of an $840,000 project expected to wrap up in September to construct a regional detention facility on Spring Pines Drive.

No single agency has jurisdiction over all of the planning, management and maintenance for drainage and groundwater in The Woodlands area—rather, it resides with a host of entities including municipal utility districts, county governments and the San Jacinto River Authority.

Norton, a member of Montgomery County MUD 47 , said she would like to see more enforcement of drainage standards and more comprehensive standards in Montgomery County, citing examples such as a new development in the southeastern part of the county that has been blamed for flooding in Kingwood. 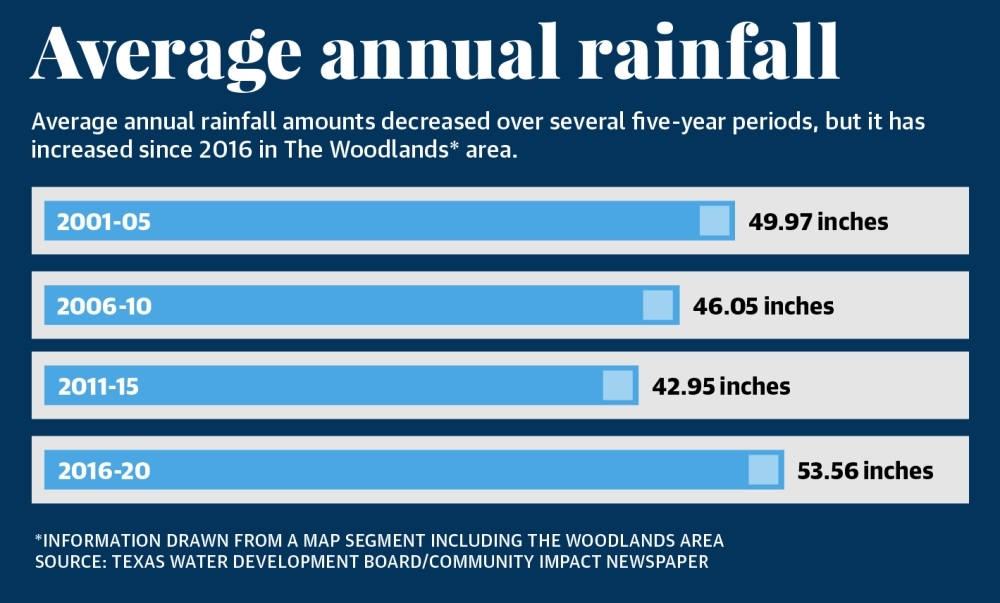 “If we recognized the fact that rainfall amounts were getting more rainwater, we could ... address these issues when these communities are developed,” Norton said.

In 2019, the Texas Legislature passed legislation to create a flood planning process for the state. The TWDB was also charged with administering a newly created flood infrastructure fund approved by voters in 2019 to finance flood-related projects. All of Montgomery County and parts of 10 surrounding counties are now part of the San Jacinto Flood Planning Region 6 designated by the TWDB.

A $1 million engineering study launching this fall is funded by municipal entities, including Montgomery County MUD 386 in The Woodlands, to consider a Spring Creek detention reservoir project. The Region 6 planning group will oversee the process. “This would make a dramatic difference on the amount [of flooding] in the Spring Creek area with 2-3 feet less flooding, ... which is a lot considering structural flooding in Montgomery County in Harvey was less than 18 inches of water,” Rieser said.

Flood management must be considered on a regional basis, he said.

“Yes, it’s true that the issues happened more downstream, but there have been substantial flooding instances upstream, and anything that happens upstream can impact downstream. The right way to approach it is to look at the whole watershed,” Barrett said.

One challenge in Montgomery County is unlike neighboring Harris County, which was hit harder by storms such as Harvey, there is no flood control district. The Harris County Flood Control District is a special-purpose district that levies a property tax to help fund and maintain flood prevention infrastructure.

In 2018, the district received approval from Harris County voters for a $2.5 billion bond referendum for flood damage prevention programs.

Norton said while it might not be feasible for the smaller county—Montgomery County had about 607,000 residents in 2019 compared to Harris County’s 4.7 million residents, according to U.S. Census Bureau information—the need for such a body has come up in discussions she has been involved with.

“A lot of people in my circles [are] saying that they’d like to see a Montgomery County flood control district,” Norton said. “I know ... making a flood control district would be another layer of government, but if we plan for and we have proper drainage standards, we wouldn’t be in this [flood risk] situation.” Harris County’s bond program includes several projects on Spring Creek. According to the HCFCD, $49,500 is slated for drainage improvements in the Timarron and Timarron Lakes communities, and $29,500 is designated for Mckenzie Park. Both projects are at the Montgomery-Harris county border. 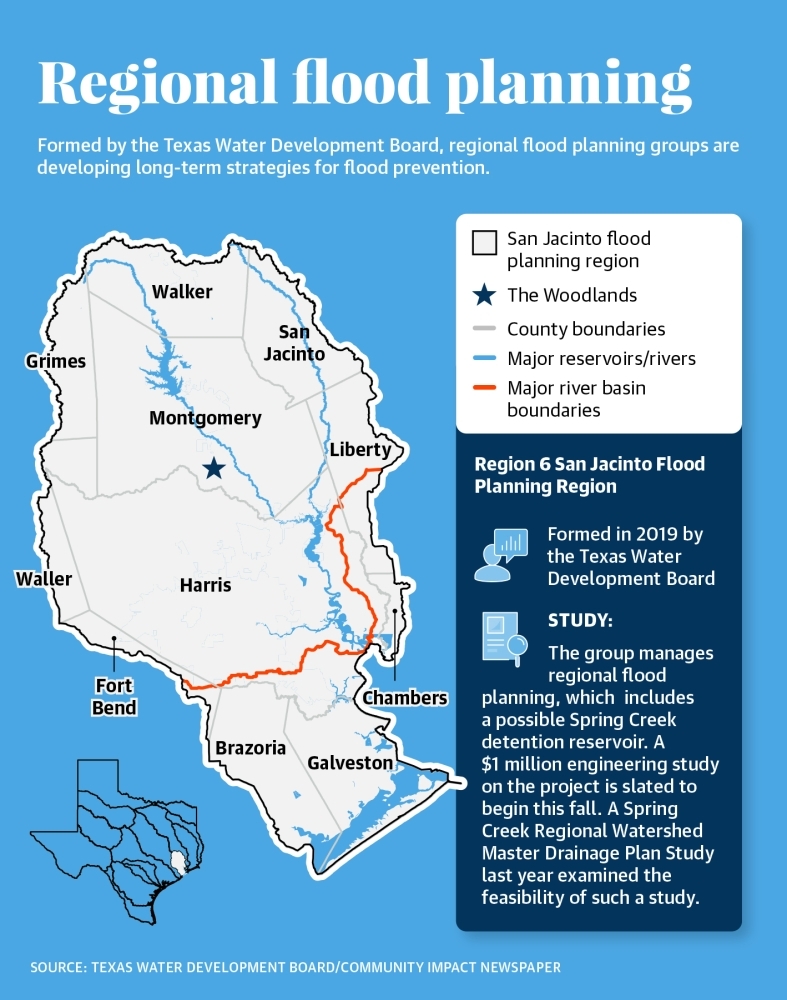 However, Spring Creek projects are not expected to benefit from funds from the Texas General Land Office if they are awarded, Barrett said. The GLO had initially denied Harris County federal funding, but in late May, Commissioner George P. Bush said he would request $750 million for the county.

[The HCFCD] are a partner, but [we] weren’t relying on the GLO to provide those funds,” Barrett said. “The whole issue of Harris and Houston ... should not impact our projects that we have in the chute ready to go.”