contribute today
Montgomery County commissioners approved the $1.3 million purchase of a building to house the county’s traffic operations department at its Jan. 14 meeting.

The court reconvened after an executive session to unanimously approve a resolution for the purchase of 131 S. Trade Center Parkway, Conroe, for an amount not to exceed $1.5 million, according to discussion at the meeting. The location is just north of Hwy. 242 and east of I-45.

“This will be used for the new home of the Montgomery County Traffic Operations Department,” Precinct 3 Commissioner James Noack said. “They are housed in Precinct 3; this will give us the ability to use that for some other road and bridge functions."

The resolution will move the process forward, but there will be a 30-day feasibility study, County Attorney B.D. Griffin said at the meeting.

Noack said at the meeting the potential new facility will allow the department, which is funded through precincts 2 and 3, to better manage roadways.
RELATED STORIES

"[Precinct 2 Commissioner Charlie] Riley and I have been funding this department since the beginning of this budget year, and going forward we’re going to look at some of the IT department housed in there ... and at some point in time when the funding is available, Northstar will be moving there," he said, referring to the county's traffic management system.

A resident of the Houston area since 2011, Vanessa began working in community journalism in her home state of New Jersey in 1996. She joined Community Impact Newspaper in 2016 as a reporter for the Spring/Klein edition and became editor of the paper in March 2017.

Both full-time and part-time employees will receive a check on April 10. 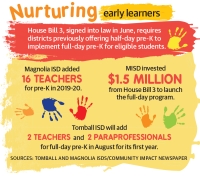 On the heels of Gov. Greg Abbott's orders to close all state parks and historical sites to help curb the spread of the coronavirus, the Texas A&M Forest Service is closing William Goodrich Jones State Forest in The Woodlands area until further notice.