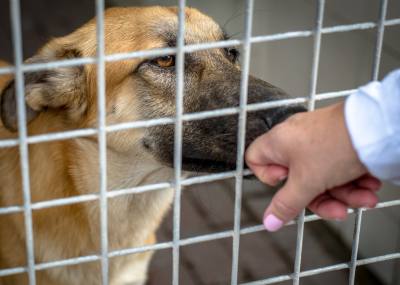 Johnson was hired by Montgomery County in May following the resignation of former MCAS Director Charles Jackson.

Growing up in Washington, Aaron Johnson said he was always bringing animals home—from dogs and cats to horses. Today, he continues to find homes for stray animals—on a larger scale—as the director of the Montgomery County Animal Shelter.

Johnson was hired by Montgomery County in May following the resignation of former MCAS Director Charles Jackson. Prior to his role with the county, Johnson served in various roles from animal control officer to medical services manager for the Houston Bureau of Animal Regulation and Care for 10 years.

He worked for clinics in both Washington and Houston prior to his tenure with BARC, garnering 15 years of experience in the field.

“Pretty much all throughout my life, I’ve been involved with animals,” Johnson said. “It started with me bringing a horse home when I was a kid. At first my parents were like, ‘Another one? What’s going on here?’ But then they just started getting used to it. Then when I got older, I started working with small and large animals in clinics. I just always seem to go back to the animal welfare.”

Johnson has an associate degree in business management as well as several certifications, including one from a 120-hour cruelty investigations program through the University of Missouri.

As director, Johnson oversees a shelter staff of 50 and an animal control staff of 11. Johnson said he works to implement new wellness initiatives, applies for grants and assists in day-to-day activities.

Through partnerships with organizations, such as Operation Pets Alive, The Heartworm Foundation and Lone Star Animal Welfare League, Johnson has also been instrumental in raising the live release rate—the percentage of animals that leave the shelter alive­—from 81.2 percent in 2016 to 92.5 percent in 2017, designating the MCAS as a no-kill shelter, according to Eric Ravvid, the public relations director for Best Friends Animal Society, which worked with MCAS following Hurricane Harvey.

In addition to programs the shelter already has in place, such as Wednesday Night Walks and photo shoots for dogs on Sundays, Johnson is working to implement a spay/neuter initiative by eliminating the barrier of transportation for many pet owners.  Johnson said the shelter should be receiving its own trailer, which will serve as a multifunctional resource for MCAS, in spring 2018.

“The trailer will be able to be used in a disaster as well as for adoptions or transporting animals in a large-scale seizure,” Johnson said. “So we’re really excited about that, and hopefully we can have a good impact on the community.”

MCAS is also working to get new cages for the cat and small dog areas and pushed a microchipping initiative by offering free microchipping for Montgomery County pets through the end of 2017.

Johnson said he hopes more people will consider adopting shelter and rescue animals in the future as they are never in short supply.

“People always think they want a specific breed and that the shelter never gets those breeds, but we do—we get everything from Chihuahuas and dachshunds to German shepherds and huskies,” Johnson said. “We definitely have plenty of animals here, so please check your local shelter first.”

Johnson said although animal cruelty cases and putting down animals are the hardest parts of his job, working with animals makes everything worthwhile.

“My favorite part of this job is being able to reunite people with their pets, finding homes for animals and just seeing how resilient animals are even after severe cruelty cases,” Johnson said. “I just love working with animals—I always have—and I see myself staying here for the foreseeable future.”
SHARE THIS STORY