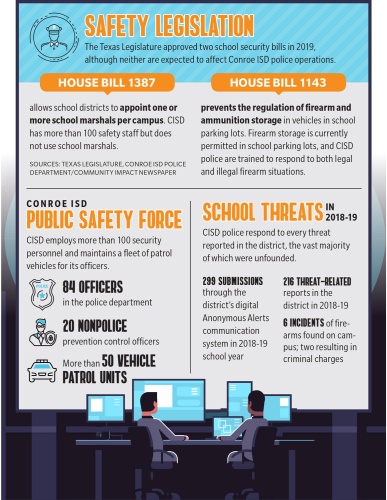 As Conroe ISD opens the 2019-20 school year, the district police department continues to build its resources for security and threat response.

CISD police Capt. Matt Blakelock said the department’s increased staff and a new student reporting program have assisted the department over the past year. CISD police responded to more than 200 threats in 2018-19, including six on-campus firearm incidents—three of which involved weapons abandoned on or near campuses that were not connected to any schools or students. According to previous reporting by Community Impact Newspaper, 50 threats and three firearm incidents were recorded in 2017-18.

Blakelock said the annual rise was likely due to student use of the district’s new Anonymous Alerts digital reporting system and an increasing national focus on safety and awareness, rather than a significant increase in notable incidents.

“Citizens have become more vigilant and have started paying more attention to their environments,” he said. “This has led to increased concerns for safety and a much higher reporting rate of things that may not have garnered much attention from students or parents in the past. ... The overwhelming majority of potential threats reported resulted in there not being any credible threat of student or staff safety.”

Blakelock said district police must act on every reported threat, which can include anything from inappropriate jokes to more serious circumstances. He added that CISD officers are trained under a state-mandated threat assessment protocol that allows for the immediate start to threat investigations.

“We’re going to find out exactly, ‘Is this a concern, or is this a kid doing something silly?’ And then we’re going to take the action based on that,” he said. “We take every threat seriously, and then we try to rule it out. If we can’t rule it out then we have to take some action.”

While some schools across the state could change operations based on two safety-related bills that passed in the Legislature this year, Blakelock said neither is likely to affect CISD. One, House Bill 1387, allows school districts to increase the number of dedicated school marshals at their campuses. Blakelock said CISD does not use marshals, given its current force of more than 80 officers and 20 nonpolice prevention control officers.

“The board of trustees made the decision to add 17 additional police positions last year,” he said. “The best fit for us, and what they decided to do, is try to increase the police presence on every campus during the school day.”

Another piece of legislation signed by Gov. Greg Abbott, HB 1143, protects the rights of licensed handgun owners to store their firearms in cars in school district parking lots without regulation. Gun owners are still prohibited from carrying weapons inside schools. Blakelock said the department is aware of HB 1143 and the risks related to the presence of firearms stored near schools, but again said the legislation would not likely affect the police department’s current operations.

“If there’s firearms on the campus in a vehicle, then they could come into play,” he said. “Officers have a heightened vigilance to be prepared to respond to that as well as they’re highly trained and know and respect the rights of law-abiding citizens if they’re possessing the firearm legally. So I don’t feel like it’s really going to change our daily operations.”