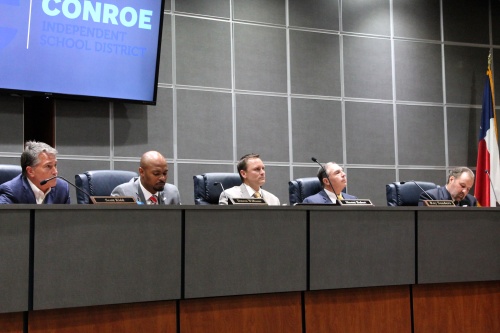 The Conroe ISD unanimously voted to order a $677.37 million bond for November. Trustee Dale Inman was not present.

Citizens remain divided as the Conroe ISD board of trustees unanimously ordered a $677.37 million bond for the Nov. 5 ballot.

At an Aug. 13 meeting, the CISD board of trustees approved a finalized bond from Superintendent Curtis Null and the staff. The major projects in the bond on Proposition A include Phase II construction at Conroe High School, a new junior high in the Caney Creek feeder zone and mechanical improvements at Oak Ridge High School. The total cost of Proposition A is $653.57 million. Proposition B is a single line item for artificial turf for sports fields, costing $23.8 million.

The bond is $6.43 million less than a bond draft discussed in previous board workshops. This is due to decreasing the amount spent on Campus Renovations and going from $20 million for technology to only $5 million for technological “infrastructure,” according to Null. The finalized bond also includes $11.385 million for a Conroe High School 9th Grade campus.

Null said the bond will still not result in a tax rate increase.

Following Null’s presentation, the trustees discussed the bond. Trustee Scott Kidd asked the other trustees if they had any concerns about the projects, specifically for campus renovations and security. Trustee John Husbands said he was not concerned about the renovations, but thought the public had some misinformation about the need of these projects.

“If you have questions about Conroe High School, ask someone who knows,” Husbands said. “Don’t repeat things just because they make good sound bites, for your issue or mine. These are kids we’re talking about.

Trustee Scott Moore said one of the criticisms of the previous bond was the inclusion of some luxury, non-essential projects. However, he said the projects in the current bond represent a direct benefit for the district.

During the public comment portion of the meetings, citizens showed their divided opinion on the bond. CISD resident Kelly Cook asked the board to hold off on the bond until the 2019-20 budget was finalized and the tax relief provided by the state legislature could be put into place.

“You can join in the effort to make this a reality or you can stand in the way,” Cook said.

John Wurtz, treasurer of the Montgomery County Republican Party, spoke as a private citizen and said the board had not made major improvements between the two bonds, especially considering the $350 million 2015 bond.

However, some citizens and public officials spoke in favor of the bond. County Treasurer Melanie Bush spoke as a private citizen and gave kudos to the board for their hard work. She said having served as CISD president in the past, she understands the work that goes into serving the district.

“You thought about what the voters said and you listened to what they said in May and their concerns,” Bush said. “And I’m here to applaud you for that because it’s not easy. It’d be real easy to let ego get in the way of that and not listen.”

Stuart Lapp, chairman of The Woodlands Chamber of Commerce, spoke as a private citizen and said the board should order the bond because CISD is a “vitally important asset” to attracting business to the county.

“I can tell you from personal experience that when business leaders and businesses are determining whether to relocate their operations into this county, one of the first things they ask is, ‘How are the schools?’” Lapp said. “And we as stewards of the business community have the pleasure of saying, ‘The school are great.’”

The two bonds will be individual items on the Nov. 5 ballot.