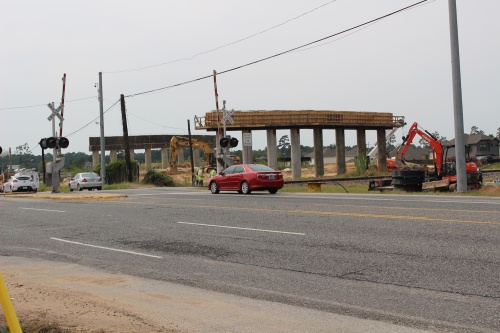 Construction on the $60 million Montgomery County Precinct 3 Rayford Road widening project began April 28, 2017 and is expected to be complete by summer 2019.

“As expected with a weather event of this magnitude, there have been some minor construction-related work and utility relocation delays due to Hurricane Harvey,” Wilson said. “Our crews are working hard to keep the project moving forward.”

The $60 million Montgomery County Precinct 3 project will widen Rayford Road from four to six lanes between Lazy Lane and the Grand Parkway. A six-lane bridge will be constructed over the railroad tracks, new traffic signals will be installed and a raised median will be added.

Construction on the project began April 28 and is expected to be complete by summer 2019. The project was funded in the Montgomery County November 2015 bond election.

Wilson said upcoming construction activities include working on the bridge over the railroad, utility relocations, installing storm sewers, construction of pavement, curb and gutter and expanding the existing bridge over the channel between Wild Rose Drive and Aldine Westfield Road.

The center turn lane between W. Hawthorn Drive and Wild Rose Drive was originally slated to reopen by the end of September, however Wilson said Harvey delayed the timeline.

“When driving through this area, we recommend using caution making left turns,” Wilson said. “There will be various alternating east- and westbound temporary lane closures from Richard Road to [The Grand Parkway] Monday through Friday. There may be some Saturday lane closures for utility work.”