Since opening in October 2017, Palette Indian Kitchen has drawn residents’ taste buds from all over Houston to its location on Rayford Road.

Owned by Calvin Kolluri and his wife, Sujatha, the two said they wanted to open a restaurant in the Rayford area due to a lack of ethnic restaurants there.

“There’s a lot of good pizza places popping up everywhere, but there were no ethnic flavors,” Calvin said. “Living in this neighborhood, we wanted to bring flavor to the community.”

“We take a domestic approach in the preparing of food,” he said. “Our spices are actually imported from India. Palette offers the most popular dishes in Indian cuisine.”

Calvin said he and his wife were both brought up in households where hospitality was prevalent, which inspired a passion for food early in life.

“In India, making fresh food is almost a given thing,” he said. “Back then, we almost never stored food in the refrigerator. When my dad would tell my mom guests were coming that evening, I would go to the market. … Early on, I was used to picking the finest produce and meats. Mom would create this magic in the kitchen.”

Creating a good meal in his household was a way of honoring the guest, and it is an approach he and Sujatha take with each guest that comes into their restaurant, according to Calvin.

One of the more popular dishes is an appetizer known as the chicken popsicle, which is a baked chicken drumstick dipped in a sauce consisting of lemon juice, turmeric, garlic and other spices. Calvin said the dish is one of his personal favorites, and he has seen guests request the sauce to use for other dishes.

All of the dishes are prepared fresh on a daily basis. While Calvin said the process is a bit slower and more expensive, he believes the end result is always worth it.

“I would say about 95% of our new guests become regulars,” he said.

He said he wants each guest to feel like they are house guests instead of customers at the establishment—something he says he does not see when he travels and eats out.

“We don’t refer to our guests as customers,” he said. “Once you do that, you get into the business side of relationships.”

The idea for Palette started after the Kolluris cooked for their community to raise money for an orphanage in India. To this day, according to Calvin, he and his wife are still supporting that orphanage as well as local schools.

In order to encourage a family-friendly environment, Palette Indian Kitchen offers several more traditional American items such as chicken tenders and pasta for children. The restaurant does not serve liquor but does serve beer and wine.

Calvin said he believes guests at Palette Indian Kitchen will enjoy everything the establishment has to offer.

“I feel there’s only two kinds of people when it comes to Indian food: those who love it and those who have not tried it yet,” he said. 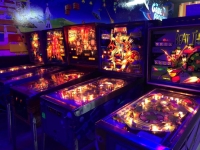