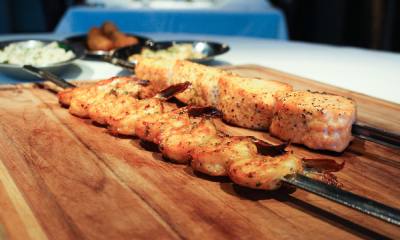 Shrimp and salmon: Gulf shrimp and seasoned salmon are skewered and served tableside.

In Brazil, eating churrasco, a Spanish term referring to beef or grilled meat, is a three to five hour meal during which individuals relax, drink and dine while enjoying the subtle nuances of the grilled meat, Abrantes said.

“[The meat] is the best it will be in that moment, so we really take our time,” Abrantes said.

The restaurant’s executive chef and co-owner, Vanderlei Bernardi, helps bring authenticity to the flavor profiles and menu items featured at Avenida Brazil, Abrantes said. Bernardi has more than 20 years of experience working in Brazilian steakhouses, moving up from dishwasher to various chef positions.

Before Bernardi opened his first restaurant in Houston with Abrantes’ father, Luis, in 2008, he served as head chef of another Brazilian steakhouse, Fogo de Chao, for many years. Approximately a decade after the two Brazilian families formed a partnership, Avenida Brazil has three restaurants in the Greater Houston area: one in southwest Houston, one in Clear Lake, and the newest location is in The Woodlands area.

The family-owned restaurant rebranded when the Shenandoah location opened last summer—transforming from Tradicao Brazilian Steakhouse to Avenida Brazil Churrascaria Steakhouse. The restaurant’s new name was inspired by the Avenida Brazil street in Bernardi’s country, which is a common street name akin to Main Street in the U.S., Abrantes said.

Gauchos, or meat servers, prepare the meat over a 700-degree rotisserie grill and serve it on sizzling skewers, slicing the meat tableside onto patrons’ plates. With the flat-rate purchase of lunch or dinner, patrons will be brought high-quality meats as long as their individual coaster—with a red and a green side—has the green side facing up, Abrantes said.

“When we made our menu, we wanted each meat to have its own distinct flavor,” she said. “We want to enhance the flavor; we don’t want to cover up the natural taste of the meat.”

In mid-January, Avenida Brazil participated in The Woodlands’ annual Taste of the Town culinary event, at which attendees could sample diverse cuisine from numerous local restaurants, caterers, bakeries, delis and beverage companies. Avenida Brazil won the title of Best Entree in the Best of Taste competition for the restaurant’s 21-day, wet-aged, bottom sirloin.

“I want us to be the community Brazilian steakhouse in this area,” she said. “We’re here to stay—we’re an established restaurant. We’ve been doing this a really long time. We’re about to hit 10 years, and for a Houston restaurant, I think that’s a big deal.”