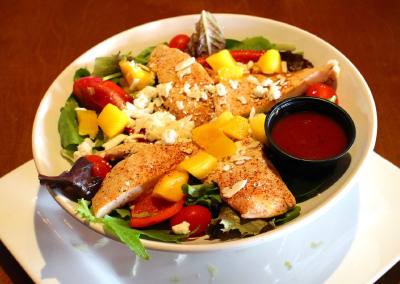 After managing his brother’s restaurant for 10 years, Jose Medina decided to open his own Mexican restaurant in The Woodlands area.

Medina, co-owner of Mi Tierra Mexican Grill on Rayford Road, opened his first restaurant, Casa Imperial, 13 years ago on Sawdust Road. After selling the eatery, Medina and co-owner Cynthia Sanchez decided to use their experience and passion for food to start a new venture, Mi Tierra, in December 2016.

“We’ve had a really good customer response so far,” Medina said. “People from the Casa Imperial location are now coming here. It’s a good area to be in, and it is going to keep growing out here.”

Medina said the restaurant offers both Tex-Mex and authentic Mexican cuisine, such as menudo, caldo de res and caldo de pollo, which are different types of classic soups. Enchiladas and fajitas are also popular Tex-Mex menu items at the eatery.

“We try our best here, and we have a good group of people,” he said. “We have a good response with our tacos and fajitas, and our stuffed chicken plates are also very popular. We also make our own flour and corn tortillas here in the restaurant.”

The restaurant also has a full bar. Mimosas and bellinis are served during brunch hours, and specialty margaritas with various tequilas and fresh juices are made to order.

“The Supremo Margarita is our most popular drink at [the bar],” he said. “We are also going to add more wine to the bar menu as well.”

In addition to a variety of margaritas, the restaurant offers beer, wine and signature cocktails as well as nonalcoholic drinks, such as lemonade, tea and coffee.

For those looking to plan a party or a private event, a private dining room is also available at the restaurant that can be booked in advance, Medina said.

While Mi Tierra only opened a year ago, Medina said he is already thinking about growing and expanding the restaurant to other locations in the Greater Houston area.

“We’re probably going to think about growing in the future,” Medina said. “We’ve appreciated all the support we’ve gotten so far from the [community].”