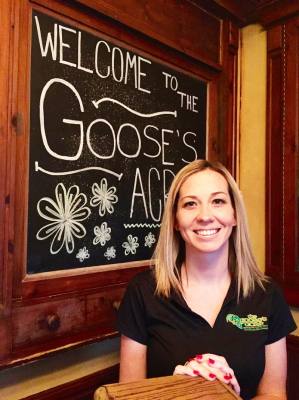 Natalie Ross started her first job as a waitress at The Goose’s Acre Bistro & Irish Pub 11 years ago before becoming a bartender at the eatery in 2009. Now as lead bartender, she works on crafting her own signature drinks.

“This is my first bartending job,” Ross said. “It was really like my second job when I started, and I just never left. It really is such a fun job.”

Since transitioning to bartending, Ross said she has enjoyed crafting the bar’s signature drinks and creating some of her own. One of the drinks she created is called Natalie’s Cherry Limeade. It is made with cherry-infused vodka, Sprite, fresh lime juice, grenadine syrup and is garnished with limes and cherries.

“We update our [drink] menu every couple of months,” she said. “I [created] Natalie’s Cherry Limeade, and it was just like the ones you can get at Sonic. It was perfect for summer. It’s not on the menu right now, but we still have people who come in and ask for it and we’ll serve it.”

For the holidays, the bar also features cold weather drinks, such as the Moscow Mule and gingerbread Schnapps.

Besides Natalie’s Cherry Limeade, Ross said The Goose’s Acre has another popular drink among customers. Waterway Punch is named for the Woodlands Waterway, which can be seen outside the eatery.

“My other favorite drink to make is probably the Waterway Punch, it’s the most popular one here,” she said. “It’s fruity and easy to drink, but it has a little bit of Don Q 151 Rum, so it has a kick that will get you going.”

Ross said she enjoys being a bartender at The Goose’s Acre because not only does she get to meet different people every shift she works, she also gets to create and serve a wide variety of drinks using different types of spirits and flavors.

“You do some of the same stuff every day, but you also meet different people every day,” she said. “Everybody has different drinks [they like to order]. We’re also unique because we have so many options. We have high-end tequilas, Irish whiskeys and 41 different beers on tap. It’s a lot of variety.”

While Ross said she can now make a wide range of cocktails on and off The Goose’s Acre menu, it took her a while to learn the recipes. She encourages any aspiring bartenders to start out slow and work on cocktail memorization.

“There are a lot of drinks, and you’re never going to know all of them,” Ross said. “When I first started, I would make a flashcard before each shift with a different drink. I would learn one new flashcard a day.”

Ross said her years of experience at The Goose’s Acre and love for bartending has introduced her to a second family of fellow employees, and she still plans on bartending in the future despite going back to school next semester.

“At this point, it’s kind of like a second home,” she said. “It helps to enjoy the people that you work with. Some of the staff here are like family to me now.”
SHARE THIS STORY