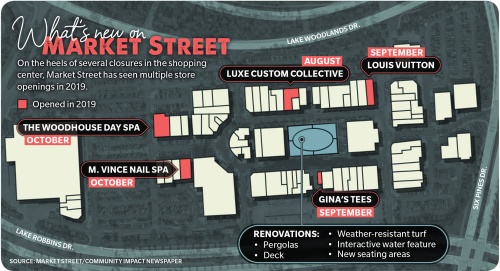 On the heels of several closures in the shopping center, Market Street has seen multiple store openings in 2019. The Market Street shopping center has seen changes in 2019 with openings and renovations throughout the year despite several store closures, Marketing Director Noemi Gonzalez said.

Among the vendors that have opened this year are designer handbag retailer Louis Vuitton, boutique Luxe Custom Collective, The Woodhouse Day Spa, clothing store Gina’s Tees and salon M. Vince Nail Spa. Madison Reed, a hair coloring salon, will open Oct. 28, according to a news release from the company.

The new shops have replaced Z Gallerie, Charming Charlie and Sugarfina, which closed due to bankruptcies, as has Maggies, a clothing and home decor store which closed when the owner retired.

“We want to keep it current and exciting for our customers,” Gonzalez said. “We have purposefully been trying to change the retail mindset of Market Street to make it more exciting and new.”

Gonzalez said some of the new tenants come from e-commerce backgrounds and wanted to create brick-and-mortar locations, and the Market Street locations are some of their first efforts to do so.

According to J.J. Hollie, president and chief economic officer of The Woodlands Area Chamber of Commerce, Market Street has unique advantages for bringing in new storefronts.

The center has walkable public spaces and a central square.

“It is really a public gathering space,” Hollie said. “People can come and take advantages of the offerings there.”

Hollie said when a business leaves the shopping center, the vacancy is usually filled quickly.

“We want to create a place for experiences, and we’re seeing that every weekend,” Gonzalez said.

Editor's note: This story was updated from the version in the print edition to reflect the opening date of Madison Reed announced by the company in a news release received after press time.