Tamina community could have public sewer services by 2019 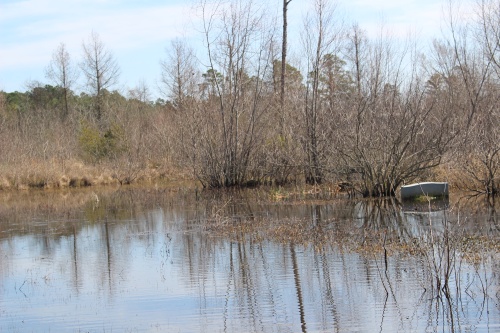 The Sweet Rest Cemetery in Tamina has served as the final resting place for former slaves, Native Americans, military veterans and law enforcement officers since the 1870s.

Nearly two decades after Tamina began fighting for public sewer service, a new project has been proposed, which could bring water and sewer infrastructure and services to the historic community by as early as 2019.

Surrounded by the growing communities of The Woodlands, Shenandoah and Oak Ridge North, Tamina is a small, unincorporated community, which was founded in 1871 by freed slaves following the end of the Civil War, according to James Leveston Sr., Old Tamina Water Supply Corporation president and a resident of Tamina for 75 years.

However, nearly 150 years later, the roughly 350-400 residents who call Tamina home still depend on antiquated septic and aerobic systems to treat wastewater due to the lack of public sewer service, Leveston said.

“One of our biggest issues [in Tamina] is all of the drainage problems,” said Shirley Grimes, Tamina Community Center executive director and a 40-year resident of Tamina. “Everyone’s concerned about that, and we’re losing families because we don’t have a public sewer system. We’ve seen growth all around us, but none right here in our community.”

Prior to the creation of OTWSC in 1971, Leveston said Tamina residents hauled water from wells and stored it in barrels at their homes.

Today, residents of the 186-home community pay a deposit and sign a contract to buy water from the OTWSC. According to Leveston, the corporation purchases water from its neighboring community, Chateau Woods, which is pumped to OTWSC’s plant for storage and is then routed to OTWSC customers.

After use, wastewater is treated by a septic or aerobic treatment system, which purify a home’s wastewater through a tank and flushes it out through a sprinkler system. Neither are ideal solutions, officials said.

“Septic systems were used in Montgomery County back in the 1950s and ’60s, and residents found that the soils here don’t work really well with septic systems,” said Rick Moffatt, general manager of the Southern Montgomery County MUD. “So the septic tanks malfunction because there’s no place for the water to go and when that happens, the sewage backs up into your home or ponds in your backyard.”

Raw sewage is full of pathogenic organisms, including bacteria, viruses and parasites. According to the National Association of Local Boards of Health, exposure to raw sewage can lead to a variety of health issues, including gastrointestinal diseases.

Because septic systems are not compatible with local soil, Moffatt said aerobic treatment systems have become a more viable option in recent years. These systems, however, are more costly and only work on larger properties, making them a rare find in Tamina.

“Having adequate water and sewer would [allow us] to get off these inadequate septic systems,” Leveston said. “New rules now require aerobic systems that most residents can’t afford, and you can’t get a permit to upgrade our old septic tanks.”

Tamina has been working to bring public sewer service into the area since as early as 1999, when the project was first included on the MCCD’s five-year plan, MCCD Director Joanne Ducharme said.

“I can’t comprehend that in 2018, a little black community that has been in existence since the mid-1800s … can’t get sewer service,” Leveston said.

“Other neighborhoods that have a public sewer system have areas for their water to go,” Easley said. “But in Tamina, the only place for the water to go is in county-maintained ditches, and if those ditches aren’t cleared out, then we have a flooding issue.”

Easley said a public sewer system could provide aid in salvaging and restoring the historic cemetery.

Local water and sewer officials said they are discussing a new project—involving a partnership between OTWSC and Southern Montgomery County MUD—that would provide public sewer service to the community.

“The main issue in Tamina has been the lack of adequate water and sewer infrastructure,” Ducharme said. “It’s a very complex situation, made more complex by intervention by an assortment of government agencies. We are doing everything we can to figure out once and for all what needs to happen so that Tamina can get a public sewer system.”

In 2016, OTWSC received a $1 million loan and a $1.119 million grant from USDA Rural Development to cover construction costs of a public sewer system.

Moffatt said the Southern Montgomery County MUD is negotiating a contract with Tamina and expects final contract approval within the next six months.

The project would include sewer service hookups for 186 homes with the capacity to expand to 250 homes.

“The plan is to have [a] water and sewer system operational by early 2019,” Ducharme said. “There’s still a lot of work ahead of us, but a public sewer service would have great benefits for Tamina.”

However, Ducharme said the project is not a done deal as of early June.

In addition to making progress with a public sewer system, Easley said the Tamina Cemetery Project and CDC is also making headway in its efforts to salvage Sweet Rest Cemetery. In mid-May, the entity was notified that The Woodlands-based Huntsman Corporation pledged to contribute $50,000 to the cause, contingent upon the nonprofit’s ability to raise $5,000. As of late May, the nonprofit is halfway to its goal with $2,400.

Although the prospect of a public sewer system is ideal in theory, officials said they are concerned about the financial effects a more expensive system could have for Tamina residents, many of whom are elderly and on fixed incomes, according to Leveston.

“Right now, Tamina residents pay about $30 per month for water, and we’re estimating their bills to increase to at least $68 per month with the implementation of this project—that’s more than double their current bill,” Ducharme said.

The potential added costs would come from repaying the $1 million loan from USDA Rural Development, fees to the Southern Montgomery County MUD for water treatment and costs associated with operating and maintaining the lift system, Moffatt said.

Easley said he believes the benefits of a public sewer system would be well worth the money.

“Having a public sewer system would mean so much to Tamina,” he said. “It would bring us up to par as far as living conditions and habitability, and could even bring growth to the community.”

As contract negotiations proceed in the coming months, Tamina residents will wait patiently to see if 20 years of work may finally pay off.

“It’s been a long time coming, and it’s one of the areas of the county that has needed these services for quite some time,” Montgomery County Judge Craig Doyal said. “This project will serve the people of Tamina well and enhance their quality of life—it will certainly make a big difference for generations to come.”

Montgomery County Precinct 4 Commissioner Jim Clark could not be reached for comment at press time.