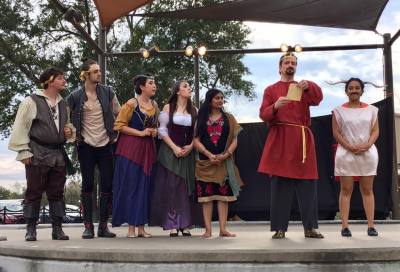 Performers take the stage at a previous Conroe Shakespeare Festival.

The first-ever Montgomery County Shakespeare Festival will be held in The Woodlands in June, featuring themed activities, food and performances of the bard's classic works.

The festival is planned to take place in Rob Fleming Park, located at 6055 Creekside Forest Drive in The Woodlands, from 2 to 8 p.m. on June 15. During the festival, visitors can shop at vendors and food trucks in the park and take part in activities for children including an arts and crafts booth. Two Shakespearean productions are also scheduled throughout the day, with 'The Taming of the Shrew' at 3 p.m. and 'Measure for Measure' at 6 p.m.

Originally based in Conroe, the festival is expanding in 2019 to include all of Montgomery County. Friends of Shakespeare Houston, the festival's organizers, say they plan to move the event to a new location around the county every year following its inaugural run in The Woodlands.

“After three years of being intimately involved with the production of the Conroe Shakespeare Festival for the past three years, I and my business partners decided it was time to extend beyond the Conroe city limits and bring a worthy festival to the entire county,” John Barton, executive director of Friends of Shakespeare Houston, said in a May statement.

For more information on the festival, or to become an event sponsor or vendor, contact [email protected]
SHARE THIS STORY