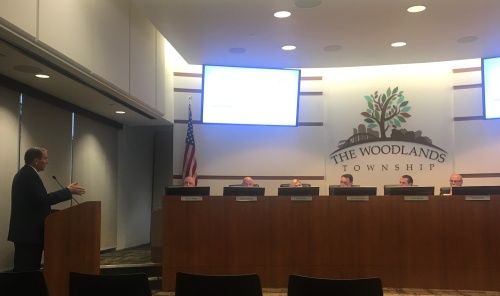 An unscheduled visit from Conroe ISD Superintendent Curtis Null turned the discussion at The Woodlands Township board of directors meeting Oct. 17 into a brief question-and-answer session after the board could not win a majority vote to endorse the district’s Nov. 5 bond referendum.

Director Ann Snyder called Null on her cell phone to ask him if he could come to the board’s in-progress meeting to answer questions about the measure. The board had not seen a presentation for the November bond, and several members said they needed more information. Board members individually expressed support for the bond on a personal basis.

After Null's visit, the board voted on the resolution, voting 5-2 to support the $635.57 million CISD bond and, in a separate 5-2 vote, to support the second proposition for about $23 million for artificial turf.

Before discussion of the resolution, about 10 people spoke in favor of the bond referendum during the public comment session. Residents noted the current portable buildings on many campuses lack the safety features and amenities that permanent school buildings would offer.

The lack of gym facilities at schools like Collins Elementary School; vulnerability to the elements; air conditioning issues at David Elementary School; and other issues are among the problems that speakers identified. They also spoke to the positive effect that a school system can have on property values throughout the region and how schools can contribute to an area's appeal.

“I ask you to look at the impact on children," resident Bruce Cunningham said. "Our world is changing very rapidly. It does raise property values because people want to come here. The first question when they move to a community is, 'How is the school system?'"

Three of the residents who spoke in favor of the bond are also candidates for the board of directors in the Nov. 5 election: David Cassidy, Walt Lisiewski and Rashmi Gupta.

One resident spoke to ask the board not to take a position on the bond.

“I would not expect the school board to take a position on whether we should put an underpass at Research Forest and Grogan’s Mill. I wouldn’t ask them to pass a resolution on a tax abatement … so, likewise, I think … they can represent themselves to the citizens,” said Mark Unland.

After Null answered questions from the board and the board discussed several other items on its agenda, Director John Brown said he had decided to change his vote from not passing a resolution in support of the bond to passing the resolution.

“I support this bond,” Brown said. “I didn’t feel a resolution was needed until we mentioned the [township’s past opposition to the] Woodlands Parkway extension, that it resonated—that a board as a whole is better than a board divided.”

Director Bruce Rieser said he supports the bond but would not vote in favor of the resolution.

“I will vote against this because I don’t think it’s our position to take a resolution against another taxing jurisdiction … That extends beyond [our boundaries].”

Director Gordy Bunch voted against the resolution initially but changed his vote after hearing Null speak, saying some of his questions had been answered.

During his comments, Null said the district has projected a $25 million shortfall next year and a $30 million shortfall the following year if the bond were to fail. Null said the district would need to look at departmental cuts, a hiring freeze and losing positions to attrition—but not layoffs—as well as changes to the student-to-teacher ratio and zoning in the future.

“If this bond doesn’t pass, our needs don’t go away, and that could possibly require a bigger bond,” Director Carol Stromatt said. “I want the best schools around.”
SHARE THIS STORY