After more than 500 homes in The Woodlands area were affected by Tax Day floods and Hurricane Harvey in 2016 and 2017, respectively, measures at state and local levels such as the recently passed Senate Bill 7 could reduce the effect of another future storm on the Spring Creek watershed.

Authored by state Sen. Brandon Creighton, R-The Woodlands, and signed into law this year, SB 7 is meant to aid local entities in receiving federal funding the state of Texas has already been approved to receive. According to Bruce Rieser, The Woodlands Drainage Task Force chairman and a member of the township board of directors, funding made available through the bill will benefit The Woodlands and the surrounding area.

“We would be making applications for a full-blown Spring Creek study, plus anything else in the area that has the potential of improving the drainage,” Rieser said.

While Rieser said The Woodlands was not significantly affected as a whole during those storms, the area around Timarron Lakes in south Montgomery County is still struggling due to the extent of flooding after Hurricane Harvey. Information from the Harris County Flood Control District states flooding in that area was caused by 20-28 inches of rainfall in the Spring Creek watershed.

“That’s the perfect stage for future dollars to come in,” Lazaro said. “With the bonds identifying where the problem areas are … those will identify specific projects where legislative funding can come into the county.”

Local entities are also getting involved. The Drainage Task Force is working on finalizing plans for a $100,000 detention feasibility study, and Rieser said the task force would also like to propose widening the Bear Branch Creek floodway and upsizing the culverts in the Grogan’s Mill area. Howard Cohen, attorney for Harris-Montgomery Counties Municipal Utility District 386, said the district is coordinating with HCFCD and four other MUDs to evaluate and develop reservoir and detention areas within the watershed to reduce flooding in The Woodlands as well as downstream to where Spring Creek and the San Jacinto River meet.

Rieser said the task force would lend support to areas outside of The Woodlands if it meant those areas would be able to receive state funding that has been made available through SB 7.

“For example, Greenfield Forest [is] adjacent to The Woodlands and has a failing retention pond that’s creating some flooding issues,” he said. “I would support [the use of] state money to get that fixed.”

Work on SB 7 began shortly after Hurricane Harvey. Creighton said the severity of the storm made him push to get the bill passed.

“We had seen plenty of hurricanes before, but nothing to the scale of Harvey,” Creighton said. “It was important for me to make sure I was doing the best I could with what I had seen and heard during a year and a half. We weren’t in session. … We were learning what obstacles we faced.” 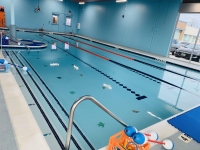