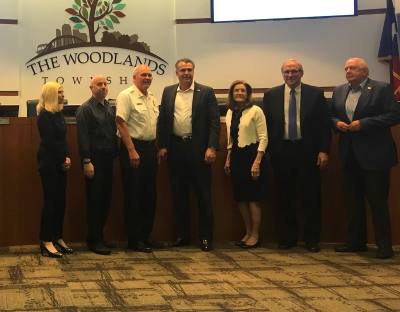 The Woodlands Township Fire Department Chief Alan Benson, third from left, announced his retirement April 24 at the board of directors meeting.

The Woodlands Fire Department Chief Alan Benson announced his retirement April 24 after 14 years with the township, encompassing a time period that included natural disasters such as hurricanes Ike and Harvey.

Benson joined the department in 2005 after a 39-year career that also included heading the Oklahoma City Fire Department for three years, according to a statement read by The Woodlands Township board of directors Chairman Gordy Bunch at the April 24 board meeting. Benson has also served as an instructor for entities including the Federal Emergency Management Agency and Oklahoma State University.

Benson said he would continue to reside in The Woodlands and will spend his retirement traveling and being a member of the community.

Benson's retirement takes effect May 2, according to a township news release, and the department has begun a search for a new chief.

The search will take four to six months to complete, according to the news release. Deputy Chief Doug Adams will serve as acting chief in the interim.
SHARE THIS STORY

The resolution will come to the full board of The Woodlands Area Chamber of Commerce for a vote on July 2.