Township incorporation vote not expected until at least 2020 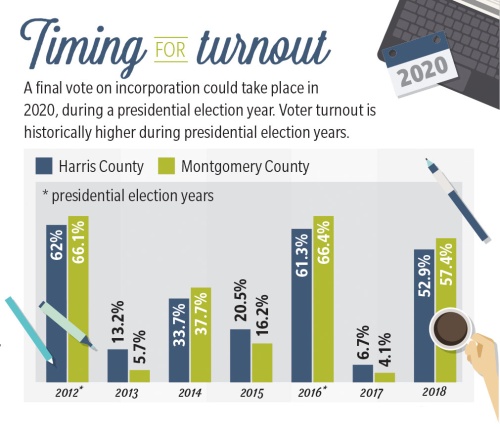 The Woodlands Township officials have ruled out a 2019 vote on whether to incorporate into a city, but board of directors members said in March a vote could take place in 2020, depending on the outcome of a study that is now past the halfway point.

The Woodlands Township began a study in 2018 to examine the feasibility and cost of incorporation, which could culminate in a vote to create a new municipality of  about 115,000 residents. As a city, The Woodlands would be able to create ordinances, receive disaster aid and hold more sway when seeking funds for road and infrastructure projects through entities such as the Houston-Galveston Area Council.

“If we were to incorporate, we would be the largest city in Montgomery County and have considerable influence on the H-GAC when it comes to road and bridge funds,” township Director Bruce Rieser said at the March 21 board meeting.

The study is more than halfway done, but the money in the contract with The Novak Consulting Group—the firm now solely conducting the effort—was nearing its end in March. More than $930,000 has been budgeted so far for the study, of which almost $800,000 had been spent as of mid-March, according to township records.

At its next incorporation planning meeting April 24, the board of directors will hear the results of Novak’s financial analysis and an estimate for the initial maximum tax rate, a key step toward completing the study. The township also plans to move forward in its conversations with Montgomery and Harris counties in April about the future of interlocal agreements to provide law enforcement and other services if the township incorporates.

“I believe it is vital that we have all the information, that we ask every question and that we participate with The Woodlands every step of the way,” Montgomery County Precinct 3 Commissioner James Noack said.

Township board Chairman Gordy Bunch said at recent township and Montgomery County Commissioners Court meetings that a 2019 vote is no longer being considered, and a date with high expected voter turnout will be selected.

“I would not hold an election in May with a low turnout,” Bunch said. “I would anticipate any election being called would be a high anticipated turnout … where the largest representation of our voters are weighing in. That would typically be the November governor … or presidential cycle.”

The total cost needed to complete the study has not yet been determined, township officials said, but the next steps of the process are to complete a tax study and determine the potential tax impact to consider an incorporation election and then hold a vote if the process moves forward.

Incorporation does not have to take place until 2057, when The Woodlands’ regional participation agreement with Conroe and Houston expires. After that time, the township could be annexed if it does not incorporate.

While the timeline for a possible incorporation vote has been extended, giving the township more time to gather and process information about the complex process, some residents have criticized the increasing cost of the study.

“Before you spend more consulting dollars, you should get more clarity on what [Montgomery and Harris counties] are willing to do or not willing to do,” former board member Mike Bass said during the March 21 meeting. “The county asked that we go back and develop a plan and come to them … but without knowing what they’re going to do, it’s hard to develop a plan.”

The Woodlands Township had initially contracted with Matrix Consulting Group for $632,000 and The Novak Consulting Group for $240,000 in January 2018 to provide two financial studies, but the board of directors ended the Matrix contract in December with $128,093 remaining in the agreement.

Novak is now the only firm conducting the study, which Community Impact Newspaper previously reported was expected to wrap up in the first quarter of the year. That timeline has also extended, and the expected finishing date for the study will be provided April 24, Novak President Julia Novak said.

As of mid-March, $295,368 had been paid to Novak Consulting for services rendered, said Lisa Morris, The Woodlands Township accounting and public information analyst, in response to an open public records request.

The total amount budgeted on incorporation study consulting as of March was $932,907, of which $799,275 had been spent, she said. The studies are funded by the township’s incorporation reserve of $10.5 million, intended to help cover the initial costs associated with incorporation. Steps remaining in the process include accepting the financial analysis from Novak and determining the maximum initial property tax rate that can be imposed after information. The board will then decide whether to hold an election and when it will occur. Voters would vote both on incorporation and the initial maximum tax rate.

“It’s a little more complicated than anybody anticipated,” Rieser said of the process at the Feb. 27 incorporation planning session. “We are finding this out every week as we work on this.”

The township’s April 24 incorporation planning meeting will include Novak’s presentation on the cost of incorporation.

Law enforcement in The Woodlands is provided through contracts with Harris and Montgomery counties, but the board has asked Novak to prepare a financial analysis of the potential costs of those services as an incorporated city. Under the hybrid plan included in the study, a city police department would replace some services provided by the counties.

The township currently pays $11.5 million for law enforcement contracts with Montgomery and Harris counties, said Nick Wolda, director of community relations for the township.  The incorporation model provided by Novak would require an additional $4.6 million in annual law enforcement costs for a police department. The study performed by Matrix only projected an additional $1 million.

Bunch’s initial appearance before the court Feb. 12 to discuss incorporation did not yield a conclusive statement of support or opposition from the county, but County Judge Mark Keough said in March he expects to work with The Woodlands on the process.

“As the process nears a conclusion and before voters get their say, the county will have an opportunity to work with the township on future plans for services,” Keough said. “When that time comes, I look forward to working with The Woodlands Township directors and the citizens of The Woodlands.”

Communicating with the public

Throughout the incorporation study process, the township board and residents have at times sparred over the need and cost for the study.

“The decisions we make about incorporation if we decide to incorporate would be final and irreversible,” said Amy Lecocq, a resident and vice president of the nonpartisan Voters Awareness Council, which includes voter education among its goals. “My overall concerns are that we do the work that it takes to get a good quality product.”

In response to conversations in public meetings and at the forum held in September, the township has developed an incorporation website designed to walk residents through the process and provide documentation for each step.

Bunch said the township will have a public forum similar to the one held in September when the study is complete and accurate data can be provided.

“All the interim data is like making sausage; no one would eat it if they saw it being made,” Bunch said. “At the end of the day, we want to present a completed transition plan.”