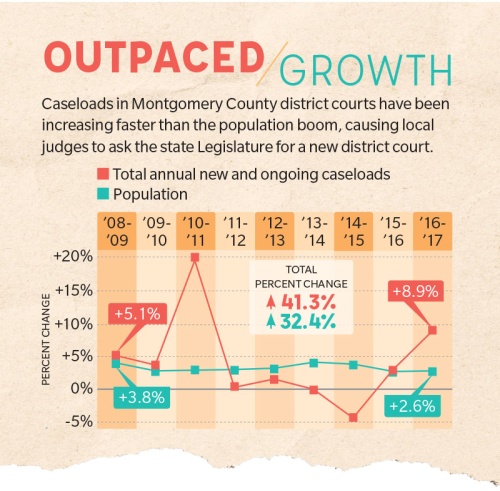 Caseloads in Montgomery County district courts have been increasing faster than the population boom, causing local judges to ask the state Legislature for a new district court. Under pressure from a vast caseload increase, the Montgomery County board of judges is asking the state Legislature for an additional district court.

Annual caseloads in county district courts have risen by 10,746 cases since 2008—a 41.3 percent increase, compared to the 32.4 percent population growth over the same time period, according to the board of judges’ court documents presented to the Montgomery County Commissioners Court on
Nov. 20. The last time a new court was created by the Legislature in Montgomery County was in 2007.

State Rep. Steve Toth, R-The Woodlands, filed House Bill 1437 on Feb. 6 requesting a new district court. The bill was referred to the Judiciary and Civil Jurisprudence Committee in late February. Identical bills filed in the House and Senate in mid-February relating to the operations of the state court system also reference the creation of a new Montgomery County district court.

Nate Jensen, director of court administration for Montgomery County, said the caseload increase has been seen across criminal, civil and family cases. With the county jail spending $50 a day per inmate and with many cases using public defenders, the overburdened system is a drag on taxpayer funds, according to the documents.

Jensen said a host of local socio-economic and demographic factors contribute to the caseload increase, such as higher marriage rates, which translate to higher divorce rates compared to other places seeing a cohabitation trend in which splitting up does not require legal action.

“As one [judge] who does all felony cases, I can tell you my dockets are packed,” Judge Kathleen Hamilton of the 359th District Court said at the Nov. 20 meeting.

“It’s very clear from the recommendations ... that break down the data for how much caseload warrants how many different courts in different jurisdictions, and that recommendation came back to us at Montgomery County needing two [new] courts, and even under some information three [new] courts,” said Sen. Brandon Creighton, R-Conroe. “We’re going to move forward through our office supporting adding one [district court].”

On Nov. 20, Judge Tracy Gilbert of the 418th District Court, who is spearheading the new district court request, said the backlog cannot be solved by adding associate judges or part-time jobs.

The Commissioners Court voted 4-1 to support the request for a new district court Nov. 20 and voted unanimously in support Feb. 12.

If the Legislature approves the bill, the earliest a new court could manifest is summer 2020 due to fiscal year funding timelines.

The county is responsible for staff and stipends, and the state pays district judges. The courtroom space and offices are already built and available.

Before requesting a new court, the judges reorganized their dockets in 2012 to consolidate case types so they could work with consistent attorney teams. They also created specialty courts, which help people access court-ordered treatment instead of going to the county jail, which was at 95-97 percent capacity in 2012.

Since the changes were made, the jail population has not surpassed 78 percent capacity since 2016,
Jensen said.

One specialty court in the county is the Veterans Treatment Court, created to help veterans convicted of felonies or misdemeanors caused by mental health trauma suffered at war to receive court-ordered treatment to improve mental health recovery instead of jail time.

Montgomery County maintains a 20-24 percent veteran population in its jail—double the national average of 10 percent, according to Tri-County Behavioral Healthcare. To address the problem, the county redirects post-traumatic stress disorder survivors through its Veterans Treatment Court and the veteran’s pod in the jail, which helps with  resources and services.

“The veterans court shows real compassion and creativity in helping our veterans navigate the criminal justice system,” said U.S. Rep. Kevin Brady, R-Conroe. “This system is one that could be duplicated in other parts of the state to help ensure our veterans receive the help they need re-entering
society.”