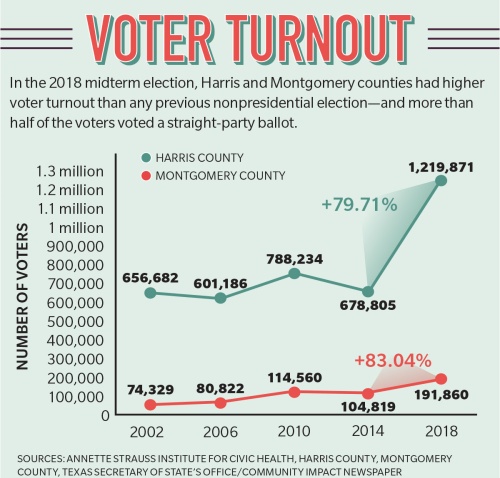 The Nov. 6 midterm election marked record-breaking voter turnout for both Harris and Montgomery counties. For the first time ever more than 1 million people in Harris County and more than 190,000 people in Montgomery County participated in a nonpresidential election, according to election data from the two counties.

“[Trump] served as a lightning rod for Democrats to mobilize voters across the state to cast a vote against President Trump. But what Beto does is give them a reason to turn out in a positive manner,” Jones said. “[Beto] provided something we haven’t had in Texas since probably 2002—a race where the outcome at the statewide level was not a foregone conclusion before Election Day.”

While Democrats gained a slightly higher percent of straight-ticket voters compared to 2014, Republican candidates still dominated local races in Montgomery County, keeping their seats in roles such as county judge, commissioners and state representatives. Overall the percentage of eligible voters that showed up at the polls countywide in November was 57.3 percent, up from 37.7 percent in the last 2014 midterm.

“This [election] was different,” said Steve Leakey, president of the Voter Awareness Council in Montgomery County and former village association president of Alden Bridge. “The turnout was nearly 60 percent, which for a midterm [election] is significantly higher, and there are multiple factors. Number one, the president is a factor. Trump has stimulated interest, stimulated happiness, stimulated hate, stimulated all the above.”

In Harris and Montgomery counties, about 76 percent and 66 percent, respectively, of voters cast straight-party ballots.

In 2014 several local races, including county judge, state representative for District 15 and county commissioner, were unopposed in the November elections and were won by Republican candidates.

“From a party point of view, I’m not sure it’s a good thing for the [Republican] party’s self-interest of winning,” Leakey said. “Montgomery County is a historically Republican county—you can see that from this election—so without the straight-ticket option [in 2020], it’ll be interesting to see the impact.”

Gov. Greg Abbott signed House Bill 25 into law in the 85th Texas Legislature, eliminating straight-party voting beginning in 2020, said Amy Lecocq, vice president of the Voter Awareness Council. She said she believes one of the reasons for the removal of straight-party voting is to encourage voters to consider individual candidates rather than political party affiliation.

Leakey said many straight-party voters do not look at their ballots before voting, so they do not vote in nonpartisan races—such as this year’s Lone Star Groundwater Conservation District board of directors race or school board races—and therefore do not finish the ballot, a practice known as undervoting.

“That was part of the motivation behind the Legislature—to reduce that amount of undervoting, but there will be a price to pay for that,” Leakey said. “It’ll take longer to vote, and there are still people that will say, ‘well, I don’t know about this one, so I’m not going to vote.’ It’ll be interesting to see what impact it has.”

In November, 39 percent and 51 percent of ballots cast within The Woodlands Township saw the township board of directors elections left incomplete, respectively, in Harris and Montgomery counties. The number of undervotes in races in The Woodlands totaled nearly half of all ballots submitted by eligible voters in The Woodlands, according to election results.

“Undervoting is just as significant of an issue as low voter turnout,” Leakey said. “Voter turnout is important, but then when you vote, vote a complete ballot.”

While turnout for this election increased, Texas is not known for its civic engagement—especially with young voters, according to the 2018 Texas Civic Health Index, a report released by The University of Texas at Austin.

Despite the record-breaking numbers this November, voter turnout totaled just 52.9 percent and 57.3 percent of registered voters in Harris and Montgomery counties, respectively, according to county election data.

Jay Jennings, a postdoctoral research fellow at The University of Texas at Austin, said factors contributing to Texas’ low participation in politics and low participation in the community include the rate of new people moving both in and around the state and Texas’ rank as one of the four youngest states in the country.

“Recognizing that people are young and transient in Texas and that we rank high in that is going to give some degree as to why it’s a challenge for Texas to be more civically involved,” Jennings said.

He said voting equates to representation in government, so if young people are not voting, they will not be represented in Congress or the state Legislature. Jones also said for individuals with a higher income, it is usually easier to take time off work to get to the polls and vote.

Comparatively, the area with the lowest turnout—Montgomery County Voter Precinct 84— is the least wealthy in The Woodlands area with a median annual income of $68,597 and was slightly younger with a median age of 35.2 In Precinct 84, just 47.6 percent of voters participated this year.

“The higher your income ... voting for you is a much less costly exercise than it is for somebody who works from 8 a.m.-6 p.m. every day and can’t get any time off and doesn’t have a car,” Jones said.

Lecocq said she believes millennial voters often do not understand the effects their votes have.

“When [millennials] vote today, their vote will have more impact in their lives than my vote when I vote today. They’re going to be around for a lot longer to experience the effects of every vote,” Lecocq said.

Hidalgo will be sworn into office Jan. 1, as will Precinct 2 Commissioner-elect Adrian Garcia, shifting Harris County Commissioners Court to a Democratic majority.

Emmett held a press conference after the Nov. 13 Commissioners Court meeting about the election and his time in office. He said he believes his loss was a result of Democratic straight-party voting.

“I’ve said it over and over, you have straight-ticket voting where 77 percent of the people vote straight ticket, and the margin of Democrats over Republicans is 105,000, and the county judge position is buried way down in the middle of the ballot,” Emmett said. “I made up 87,000 of [votes.] … It just wasn’t enough. There aren’t enough non-straight-ticket voters out there to make up the difference.”