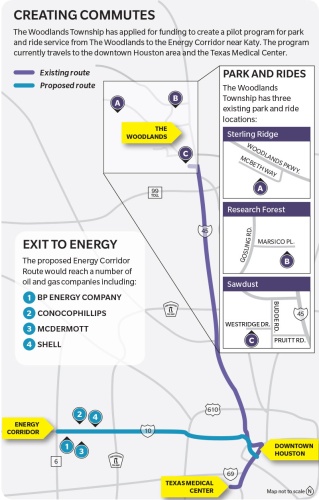 The Woodlands Township has applied for funding to create a pilot program for park and ride service from The Woodlands to the Energy Corridor near Katy. The program currently travels to the downtown Houston area and the Texas Medical Center. For nearly 30 years the township has operated The Woodlands Express park and ride program to serve commuters traveling from The Woodlands to Houston. The program has three park and ride locations in the Sterling Ridge, Research Forest and Sawdust areas with two existing routes to the downtown area and Greenway Plaza, and the Texas Medical Center.

The program only runs Monday through Friday and only to these destinations; however, The Woodlands Transit Program Manager Chris LaRue said there are opportunities to expand.

One such option is to begin providing service to the Energy Corridor, an area around the intersection of
Hwy. 6 and I-10 that is home to many large oil and gas companies. Following the relocations of many energy companies such as McDermott—formerly CB&I—which relocated from The Woodlands to the Energy Corridor earlier this year, LaRue said many oil and gas company employees who previously used the park and ride service to travel downtown have requested The Woodlands add a route to their new offices.

“We’ve had some recent service area changes, what they call urban to suburban relocations, where companies move from the urban core of downtown to the suburbs,” LaRue said during a presentation to the township board Oct. 19. “Shell is a good example—they moved their entire operation from downtown Houston to the Energy Corridor in 2017, which is approximately 100 passengers per day of ours that we no longer enjoy.”

Securing funding
The project could be funded through the Houston-Galveston Area Council’s Congestion Mitigation and Air Quality program, part of the council’s 2018 Transportation Improvement Program, which promotes mobility projects for federal funding. The township approved a motion to submit an application to H-GAC for funding Oct. 24.

“You need to show that you provide some congestion decrease or air quality improvements,” said Scott Barker, transit planner for HDR Engineering Inc., the consultant for the proposal.

LaRue said if approved the program would receive 80 percent of funding from the H-GAC for the first three years of the program and would be self-sustaining for two years.

Total operating costs for the first three years of the program range from $966,000 to nearly $1.2 million, with local costs funded by the township ranging from $109,000 to $152,000, Barker said. In addition to the match from H-GAC, costs would also be offset with fare revenue, and the program could also be eligible for federal funding, LaRue said.

In terms of improving air quality, HDR estimates the new program could reduce air pollution by more than 1,100 tons annually by eliminating 55,900 car trips per year.

The proposed route would follow the existing route on I-45, connect to I-10 and end at the Energy Corridor, Barker said. The bus would have 10 runs daily from Monday through Friday and would make eight stops within the corridor to drop off passengers.

Barker said the route would need about 250 passengers per day to support the program; however, LaRue said township staff sent a survey to companies in the area and received about 360 responses indicating a demand for service.

“We heard a lot from the Shell people that were working downtown and took our service everyday—loyal passengers—[asking,] ‘Can you go to the Energy Corridor?’” he said. “I still get calls about that all the time.”

Weekend pilot program
In addition to the proposed Energy Corridor, the township is also considering an expansion to its existing services downtown to provide service on Saturdays.

“We do have requests from passengers, and these I get on a fairly regular basis,” LaRue said.

The Saturday program would be funded by the township with a reimbursement from the Federal Transit Administration. Estimated costs would be about $87,500 per year after FTA reimbursements. To offset costs, LaRue said the buses would need about 130 riders per day.

LaRue said likely downtown destinations could include the Museum District, the Houston Zoo, the Texas Medical Center to serve weekend commuters, and regional events such as sporting events and the Houston Livestock Show and Rodeo.

“In my visits to the village associations, I asked them, ‘What do you think the likelihood would be of utilizing this service, not just for work purposes, but if there’s a football game, a baseball game or to the zoo?’” township Director John Brown said. “It was very positively received, but that was kind of a one-off. I don’t know if there’s 300 people a day that would go down there.”

LaRue said township staff will study if there is enough demand by surveying existing passengers. The proposed program is expected to be discussed at a future township meeting.