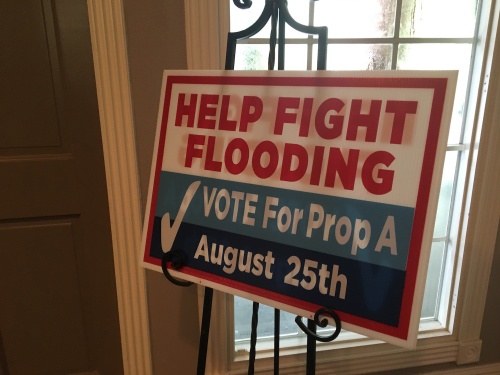 With early voting already underway for a $2.5 billion bond referendum, which could fund more than 100 flood control projects across Harris County, officials emphasized the significance of the bond during a North Houston Association flood control discussion, Aug. 9.

Approaching the one-year anniversary of Hurricane Harvey’s landfall on the Texas Coast, the NHA invited Scott Davis, senior vice president of Meyers Research and Russ Poppe, executive director of the Harris County Flood Control District, to share their thoughts about the resiliency of the Greater Houston area and the future of flood control.

“[During Hurricane Harvey] ... my home had two feet of water in it,” Harris County Precinct 4 Commissioner Jack Cagle said. “So this is not just something that we talk about in theory; this is something that we have experienced.”

Meyers Research is a nationally focused real estate research company, which tracks active single-family development in 45 markets—including the Greater Houston area—across the United States. According to data from Meyers Research, between March and June of 2018, the Greater Houston area had the fastest three months of job growth since February 1998. In that time period, construction jobs grew by 13 percent, while professional business services grew by almost 10 percent.

“Our economic engine is ready to go if we can do the right things to make that work happen,” Davis said.

David also said in June 2018, the Greater Houston area had that highest number of single-family homes sales since 2002.

“New home sales really took a dip in the second half of last year when we lost about 1,000-1,500 sales as a result of the storm, but we have recovered and have started to grow pretty dramatically again,” Davis said. “We are on pace for the strongest year of single-family home sales in the last four years.”

However, Davis said as one of the major job growth engines in the country and the affordable housing capital of the country, the Greater Houston area’s reputation is at risk following Hurricane Harvey.

“There is a significant reputational risk for our region that a lot of the rest of the country thinks that this is a dangerous place to live,” Davis said. “If we are to continue to grow and continue to be the engine of opportunity that has attracted all of us to the city, we have to act and we have to let people know that we’re taking responsibility for our challenges to keep our residents safe and by voting for Proposition A … that’s a big first step to that commitment to ensuring the safety of all of our residents and the communities.”

Davis said one of the biggest challenges the Greater Houston area faces now will be finding flood control mechanisms that do not hinder the area’s housing affordability.

“One of the actions the city of Houston has taken with respect to Chapter 19 revisions is requiring additional elevation on homes," he said. "And that’s great, but part of what those regulations have done is taken a house that could have been built on a $25,000 concrete slab and turned it into a house that needs to be built on a $150,000 engineered concrete slab, which raises serious questions on affordability.”

Davis said he feels the bond referendum will provide flood control without making the area unaffordable, while helping to secure the Greater Houston area’s reputation as a safe place to live.

“Elevation is a key component for flood resilience but it’s not the only component, and in a lot of areas where we can’t afford to do those kinds of mitigation strategies, regional conveyance and detention is the way that we’ll provide security for everyone,” Davis said. “That’s a big component of the plan the HCFCD has put together and why I support it and encourage you to do so as well.”

Poppe said a $400 million, 20-year project the HCFCD completed in 2015 with the U.S. Corps of Engineers on Sims Bayou is a success story that he feels should inspire residents to support the bond referendum.

“We crunched the numbers after Harvey and there were about 6,500 homes that didn’t flood during Harvey because of the Sims Bayou project,” Poppe said. “That in itself avoided damages and pretty much paid for this project in that one event—we still get letters from residents in that area thanking us for this project.”

“We have a very good and positive outlook for the Houston economy and the Houston real estate market, with a big but—we cannot look like we’re not acting on resolving the flooding issue," Davis said. "This bond issue—the way it’s designed and the way HCFCD has put this together—these projects will actually solve problems. So we have a good outlook ahead but that outlook does depend on our willingness to act. So I encourage you to act on Aug. 25 and consider the bond proposal.”