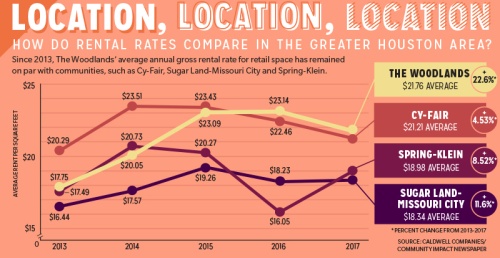 Although The Woodlands area holds the reputation of being a retail destination in the Greater Houston area, local experts say the area’s retail rental rates remain on par with those of neighboring communities, while local business owners say the rental rates can be discouraging to small businesses.

In 2017, The Woodlands’ average retail rental rate was $21.76 per square foot—making the community the 13th most expensive retail rental market in the Greater Houston area, according to data compiled by J. Beard Real Estate Company’s research department through third-party data providers.

Compared with similar Greater Houston area markets, retail in The Woodlands is more expensive than Cy-Fair, at $21.21 per square foot; Spring-Klein, at $18.98; and Sugar Land-Missouri City, at $18.34, according to data compiled by Caldwell Companies.

“The Woodlands’ retail market has remained healthy and one of the strongest in the country, posting an average occupancy rate near 95 percent,” said Jeff Beard, president of J. Beard Real Estate Company. “The Woodlands is known for its great shopping opportunities as one of its key destination draws, which is a contributing factor to our area’s healthy storefront market.”

In contrast, The Woodlands’ office space is one of the most expensive markets in the metropolitan area, according to
J. Beard data, with the average rent for office space in The Woodlands area coming in at $30.98 per square foot.

As new businesses come to the area, local developers and property owners are striving to keep up with market trends, while local businesses and organizations are trying new retail models.

As the region continues to recover from the oil and gas slump of 2014, commercial real estate sale transactions in the Houston area were up 35 percent over sales in 2016, Beard said.

Additionally, through the third quarter of 2017, more than 1.06 million square feet of retail space had been added to The Woodlands area last year, more than had been added in any of the previous four years, according to J. Beard data.

Beard said the most expensive location to lease rental space in The Woodlands area is The Woodlands Mall, followed by mixed-use projects also in Town Center like Waterway Square, Hughes Landing and Market Street.

“Business owners need to carefully weigh the benefit of a prestigious location and the potential draw it will offer against the overhead cost of doing business,” Beard said.

Gigi Noguera, co-owner of Duette Paper & Gifts that opened in Market Street in March 2017, said when choosing a location for her business, she never considered going anywhere but The Woodlands.

“We always considered locations around The Woodlands area—we live here and we really like the area,” Noguera said. “The people here really support small business, so there’s a lot of potential here for small businesses.”

Noguera said although she and business partner, Claudia Gerzog, did consider the FM 1488 and FM 2978 corridors as potential business locations, the rental rates were similar to those in Town Center.

However, Debbie Crane, owner of Crane’s Dress Boutique, which opened in Oak Ridge North in October 2017, said she feels there is a significant difference in rental rates in The Woodlands area.

“I’m a native of The Woodlands, I’ve lived here for 30 years and I love the community, but I would definitely say [the rental rates in The Woodlands] are discouraging [to new businesses],” Crane said. “I looked in The Woodlands for a location for my business but the size suites available were too small and the rates were just too high. Those aspects were more appealing [in Oak Ridge North].”

From first quarter 2013 to third quarter 2017, retail rates in The Woodlands increased by  22.6 percent, according to Caldwell Companies data.

“The Woodlands has experienced a great deal of commercial growth in the past couple of years, which allows for competitive, affordable rents throughout The Woodlands,” Taylor said. “It is not rental rates that force businesses to close, but typically scenarios that include lack of brand awareness, community engagement or online competition.”

Those rents compare with an average asking rate for office space in Sugar Land-Missouri City of $25.79 per square foot, $23.49 in Cy-Fair and $19.10 in Spring-Klein.

In 2017, The Woodlands area had 1.5 million square feet of unoccupied office space and an occupancy rate of
89.9 percent, according to Caldwell Companies.

The Woodlands community also had only two new office buildings built and completed in 2017, according to Caldwell Companies, which compares with 44 retail buildings delivered in the same year.

“In general, Town Center  experiences higher [office space] occupancy rates,” Beard said. “However, because many factors contribute to a low occupancy [rate], there is not a definite geography containing lesser occupied [office] buildings.”

In recent years major employers like ExxonMobil have opened facilities in The Woodlands, while major office spaces, like Hughes Landing have positively influenced the area’s office space sector. And while the vacancy rates for office space remain a volatile figure, Hollie said as the oil and gas industry begins to recuperate, so has The Woodlands’ office rental market.

“As the economy’s recovered and people have gotten more optimistic and we see the [market] where it is, then we’re seeing those prices rebound and the demand for that space rebound,” Hollie said.

To help remove some of the initial barriers of commercial rental rates and leasing contracts for small businesses, many prospective business owners are looking into alternative options.

The Work Lodge, which opened a location in The Woodlands in April 2017, provides office space to local businesses through a month-to-month membership program with a flat rate. The Work Lodge is open to both those needing office space for their business and to those who are jumpstarting a retail business.

Owner Mike Thakur started the company in 2015 after deciding there had to be a better place to work than out of a home office or a traditional executive suite.

“New businesses have little experience in dealing with leases,” Thakur said. “The time wasted on finding space, lawyer reviews of documents, long commitments and high up-front costs is huge. More importantly, it is draining on a business at a time they need to focus the most. Our solutions mean they simply walk in, plug in and work within an hour.”

As retail business owners search for new ways to enter the market, pop-up shops have become an emerging option in The Woodlands area, where businesses can host a temporary location to see how they community responds to the product, local business owner Carrie Sanders said.

Sanders, owner of Carrie Ann Boutique—a clothing shop for women and their dogs—hosted a pop-up shop in Market Street during the holiday season. The temporary shop was so successful, Sanders said she is opening a permanent location in Market Street in February.

“The opportunity came in October, and I planned on just going as a pop-up for the holidays,” Sanders said. “But then we got a great response from the community, [so] I decided it would be a great way to branch out and stay long-term. I have always loved Market Street, and I feel like Carrie Ann would be a good fit for the area.”

“Local experts predict at least another 50,000 jobs will be added in the upcoming year [in the Houston metropolitan area], which is always a good sign for commercial real estate investment, development and leasing,” Beard said.