As at least six hotel projects continue to develop in Shenandoah, Oak Ridge North and Springwoods Village, hotels in The Woodlands have felt the combined effects of these new hotels as well as the oil and gas downturn through lower hotel rates.

Rieser said there are about 800 rooms in the area surrounding The Woodlands, including the full-service Marriott CityPlace in Springwoods Village that is expected to open next year. Rieser said these new and upcoming hotels have increased competition for the hotels in The Woodlands.

“My guess is that as more inventory rolls in, there is more pressure combined with the pressure of the oil industry,” Rieser said. “That’s one thing we are concerned about. We’ve had a great first quarter, and we’re cautiously optimistic that things are rebounding.”

Rieser said the price of oil is also a big factor.

“If oil prices trend upward, we will be fine,” he said. “If they go downward then we have an issue. But the industry is adjusting.”

Fred Domenick, general manager of The Woodlands Waterway Marriott Hotel & Convention Center, agreed with Rieser that the first quarter of the year has been good for the hotel industry in The Woodlands. However, Domenick also said there is a large oversupply of rooms in The Woodlands and Shenandoah.

“There is an incredible amount of oversupply in The Woodlands and surrounding area,” Domenick said. “There’s no question that additional supply in the surrounding area will lower hotel rates here in [The Woodlands]. The oil and gas industry also drives our market on many fronts.”

Two new hotels opened in The Woodlands in 2016: The Westin at The Woodlands and Embassy Suites. Shenandoah has at least four hotels that will either open this year or are proposed. Crews broke ground on Crowne Plaza Hotel in Oak Ridge North last year; the new project will also feature a conference center.

“The hotel will be a major contributor,” Rudy said. “Things have hit bottom and will go up next year.”

Rieser said the CVB is actively working to rebrand The Woodlands as a place to visit to increase tourism. Gil Staley, CEO of The Woodlands Area Economic Development Partnership, said although The Woodlands has had a tough year, overall tax revenue for the township has been up, and The Woodlands will continue to bring in visitors and experience job growth in the future.

“It’s been a down year for us,” Staley said. “We will see new growth in the future, and we’ve gained jobs from major employers.”

On Aug. 6, The Woodlands Township board of directors arrived at a proposed tax rate and talked about the future of $1.78 million mounted security contractors Alpha & Omega. 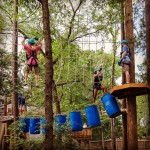 THINGS TO DO: Food truck festival, fireworks and other outdoor activities and dates to know in The Woodlands in August and September

A number of outdoor events are planned in The Woodlands area in the next month including a food truck festival and a Sept. 11 observance.

EVENTS: Where to see live music in August and September in The Woodlands area

Live music events were scheduled for several venues in The Woodlands area in August and September, including outdoor concerts

The $2.4 million project on Robinson Road saw progress in July.