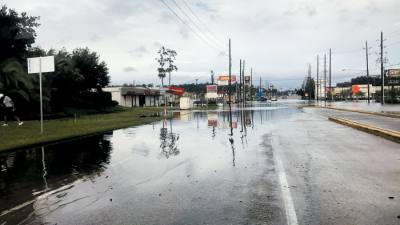 Many areas received several inches of rain over four days in from Aug. 26-29, causing street flooding on Rayford Road and other thoroughfares in the area.

Due to its proximity to Spring Creek, several local businesses along the Rayford Road corridor sustained water damage from Hurricane Harvey, which hit the city Aug. 26-29, and have just recently been able to reopen.

NOW OPEN
Bubba T’s Cajun Kitchen reopened in late September at 610 Rayford Road, Ste. 638, Spring. The restaurant took on four feet of water during Hurricane Harvey and was closed for a month. The restaurant offers Cajun staples such as gumbo and po'boys, in addition to fried, grilled and blacked seafood plates, tacos and salads. 281-419-6500. www.bubbats.com

DoubleDave’s Pizzaworks reopened in early November at 606 Rayford Road, Spring, after being closed for more than two months. The pizza joint underwent total renovations after taking on six feet of water during Hurricane Harvey. The pizzeria offers specialty and make-your-own pizzas, sandwiches, salads and desserts. 281-367-3283. www.doubledaves.com

Hop Scholar Ale House reopened in mid-September at 610 Rayford Road, Ste. 642, Spring. The restaurant took on about 40 inches of water during Hurricane Harvey and was closed for three weeks, according to owner Todd Hayden. The ale house offers 47 rotating taps, bottled beers and a limited food menu of loaded fries and bratwursts. 281-203-7406. www.hopscholar.com

Rayford Animal Wellness Clinic reopened in mid-September at 606 Rayford Road, Ste. D, Spring. The restaurant took on about 40 inches of water during Hurricane Harvey and was closed for three weeks, according to owner Todd Hayden. The veterinarian's office performs a variety of pet services including blood work, spays/neuters, digital X-rays and can treat skin, ear and gastrointestinal conditions. 281-667-9360. www.hoscho.com

RENOVATIONS
Crescent Moon Live Restaurant & Bar, located at 440 Rayford Road, Ste. 115, Spring,  announced via Facebook Nov. 8 that it would be temporarily closed for repairs due to Hurricane Harvey. A projected reopening date had not been announced as of press time. The venue hosts live music on a regular basis and offers a menu of pizzas, steaks, salads and appetizers. 281-364-9463. www.crescentmoonrestaurantspring.com

Starbucks, located near the intersection of Rayford Road and Richards Road, between 3B's Burgers & Beer and Raising Cane's Chicken Fingers, is also closed for renovations. A Starbucks spokesperson said the location is expected to reopen in March. The coffeeshop chain based out of Seattle, offers hot, cold and frozen coffee beverages, espresso options, Teavana teas and pastries. www.starbucks.com

CLOSINGS
Subway, located at 610 Rayford Road, Spring, closed after sustaining water damage from Hurricane Harvey in late September and will not be reopening, according to neighboring business owners.

Tony Nail Spa, located at 610 Rayford Road, Spring, closed after sustaining water damage from Hurricane Harvey in late September and will not be reopening, according to neighboring business owners.
SHARE THIS STORY