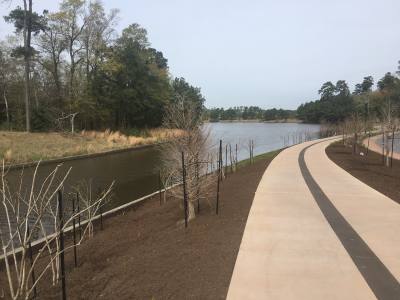 The 1.8-mile waterway features walking and biking trails and a transportation corridor to several amenities, such as The Woodlands Mall, the Woodlands Waterway Marriott, and The Cynthia Woods Mitchell Pavilion.

An 18-year project has come to an end in The Woodlands, completing a key component of the original design for George Mitchell’s master-planned community.

The Woodlands Waterway spans 1.8 miles from Lake Woodlands to Lake Robbins, connecting The Woodlands Mall, Waterway Square, The Cynthia Woods Mitchell Pavilion and Hughes Landing along the way.  Officials celebrated its completion during a March 8 ceremony near Hughes Landing, the last area to be completed.

The Waterway is a public-private partnership project and was completed with help and funding from the Houston-Galveston Area Council, Texas Department of Transportation, The Woodlands Road Utility District, the Federal Transit Administration and private companies, such as The Howard Hughes Corporation and The Goodman Corporation.

The residential transit system was featured on the famed “napkin sketch” by Woodlands founder and developer George Mitchell, which officials said eventually became the initial design concept for The Woodlands.

“The Waterway is really that unique amenity that really distinguishes The Woodlands from other places,” said Robert Heineman, vice president of planning for The Woodlands Development Company. “The Waterway, in a nutshell, is a story of a small drainage ditch that transformed over time into a major amenity and a unique landmark for The Woodlands. The napkin sketch began in 1972 and over the next 27 years, there were many, many designs, and it finally emerged into what we have today.”

Beginning in 1999, construction of the Waterway began near Lake Robbins, south of The Woodlands Mall, where an extension was opened five years later.

Heineman said while the public was skeptical at first as to how the waterway would be used, he believes it has become an important part of the area’s overall transportation plan and landscape.

“It was all based upon the projections and plan of Mr. Mitchell,” he said. “Today, there are 65,000 employees in The Woodlands. Back in 1980, there were less than 5,000, so the idea of the town center becoming an urban regional destination was pipe dream.”

In 2002, a grand opening ceremony was held for the Waterway, although construction would continue until late 2017 to extend it to the Hughes Landing area.

The project culminated in four bridges, pedestrian bridges, a water taxi service that ran from 2004 until operations ceased this past February, multiple access points and a stream flowing through the span of Town Center. Officials said these amenities have helped attract revenue-producing businesses for the township.

“Without the Waterway, you don’t have the Waterway Marriott, the convention center, the Westin and all the additional restaurants that have come in,” township chairman Gordy Bunch said. “Those bring in revenue dollars that offset our property taxes. So, the Waterway planted the seed that grew into an economic engine that helps us have long-term viability and long-term low taxes for those that live here.”

The Waterway has also helped the township to attract a number of annual events, such as the The Ironman North American Championship and The Woodlands Waterway Arts Festival, which also bring in sales tax revenue and attract tourists each year.

“As the township is the natural beneficiary of all these efforts, I can tell you that the Waterway helps us in attracting not only new residents, but new businesses, events and things that improves the quality of life for everyone that lives, works and plays here,” Bunch said.
SHARE THIS STORY