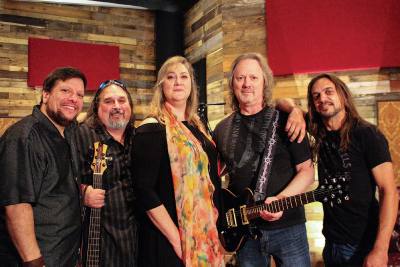 Sawdust Road, a five-person band from the northwest Houston area, emerged on the local music scene in 2012 and has found a niche performing songs to inspire listeners.

Featuring lead vocalist Mary Michelle Brown, bassist Bill Landrith, guitarist and vocalist John Lange, keyboardist and vocalist Henry Salomon and drummer Chris Coon, the group originated as a county band. However, the ensemble is made of talented musicians from a range of styles, Brown said.

“We held auditions and got the best of the best, as far as I’m concerned. We have talent from all over the place,” Brown said.

Both Brown and Landrith were raised in the Spring area and performed in a worship band for nine years before forming Sawdust Road, Landrith said.

While the group is not categorized into the Christian music genre, Brown said being raised in a church and being consistently involved in local church projects heavily influenced her songwriting for Sawdust Road. A solid foundation of hope, encouragement and love from their church has inspired Brown’s song writing, she said.

“We want people to know they’re worthy and they’re loved and important and cared for and visible,” Brown said.

The band’s 2014 debut self-titled album had an assortment of 70s-style musical elements and influences, including country, classic rock, pop and soul. Sawdust Road’s second album, which it is still recording, will remain true to its sound, Salomon said.

Sawdust Road has made its rounds across the Houston area and beyond. Most notably, the band performed at Austin’s SXSW in 2015 and performed its song, “Not your Memory” during KHOU-TV Houston’s Veteran’s Day show in 2014.