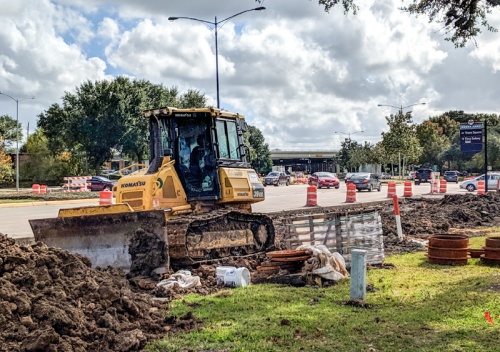 The Hwy. 6 and Hwy. 59 intersection sees 122,725 cars on an average weekday, according to recent data from the Sugar Landu2019s Traffic Management Center.

A partnership between the city of Sugar Land, Fort Bend County and the Texas Department of Transportation will focus on alleviating some of the traffic at Hwy. 6 and Hwy. 59—Sugar Land’s busiest intersection.

Construction is slated to begin in January and is expected to take 15 months to complete, Sugar Land City Engineer Jessie Li said.

The city has been looking at this corridor since 2010, Project Manager Edward Orozco said.

“What makes this a challenging project is that [Hwy.] 6 is a major artery for Fort Bend County as well as Houston,” he said. “It provides connectivity to numerous major highways, and the current configuration at [Hwy.] 59 does not adequately support the need, so this project will assist with some of the traffic flow.”

Li added Hwy. 6 touches north Houston at Hwy. 290 all the way around the city to I-45 near Galveston, bringing potential traffic from those regions.

The Hwy. 6 and Hwy. 59 intersection sees 122,725 cars on an average weekday, according to recent data from the Sugar Land’s Traffic Management Center.

As a result the city needed to acquire the right of way at some 44 parcels of land, which TxDOT helped with, Orozco said.

A new funding source is also helping the project move along, thanks to TxDOT. During his study of the project and available funding opportunities Orozco discovered since Hwy. 6 is a designated evacuation route, it was also eligible for TxDOT funding.

“Everyone knew it was an evacuation route, but we originally didn’t realize that there was a funding opportunity as a result,” Li said. “This enabled us to partner with them and Fort Bend County, with the majority of the funding now coming from TxDOT.”

This project will widen Hwy. 6 to its limit, Li said, and future plans will require the city to come up with alternative ways to ease traffic.

Some of that will be through innovative strategies. The city is already using an intelligent transportation system to provide real-time road activity to traffic centers that also helps traffic controllers manage construction projects.

In addition there is an adaptive traffic control system on Hwy. 6 that has already improved flow and delay in advance of any other initiatives, Li said.

The city also wants to focus on moving people, not cars, Orozco said.

“The city is committed to improving pedestrian areas and bike paths and finding other mobility with commuters,” he said.
SHARE THIS STORY