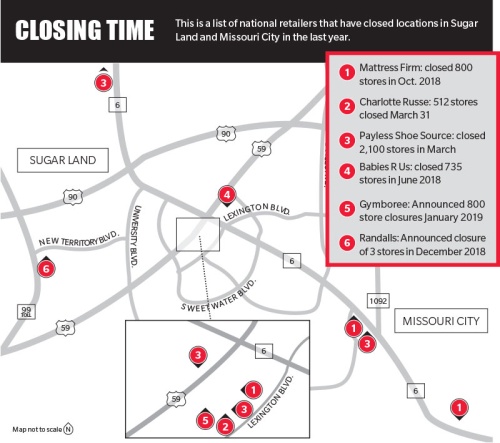 When Parcel Plus owner Aslam Jamal’s customers learned the Randalls grocery store in Sugar Land was closing last October, he said those customers asked him if he would also be moving from the same shopping center at 5800 New Territory Blvd.

“They told me, ‘Please do not move, we will keep coming here,’” said Jamal, who co-owns the mail store with his wife. “We had just signed another lease, so with that, we knew we would stay here.”

Randalls, owned by Albertsons, was one of the nearly 5,900 store closures announced in 2018 across the United States, according to retail data company Coresight Research. Other national retailers—such as Payless ShoeSource, Toys R Us and Babies R Us, Charlotte Russe, and Gymboree—also announced store closings in 2018, including some locations in Sugar Land and Missouri City. In addition, Coresight reported in April that another 6,000 closures had occurred so far this year.

For some cities, the closures might be difficult to recover from, but in Sugar Land and Missouri City, retail and local business experts said those vacancies will not be empty for long, due to U.S. Census Bureau figures showing populations increased over the past five years 36% and 8%, respectively, and the area’s higher household incomes and diverse consumer base.

“The Houston market, in particular Sugar Land and Missouri City, are still attractive for retailers,” said Venky Shankar, marketing professor and director of research for the Center for Retailing Studies at Texas A&M University. “The population is strong—6 million in Greater Houston-Woodlands-Sugar Land—one of the fastest growing cities, with a high disposable income that is growing.”

Seven months following the Randalls closure, the parking lot reflects the anchor tenant’s absence. However, Jamal said his business was not affected by the closing, though he said he is hopeful someone will move in soon to make the shopping center better.

Ideally, he said he would like to see another grocery store, but for now, he said customers have kept their word and continue patronizing his store.

“So far, we are lucky, but anyone going in there would help increase business,” Jamal said.

More e-commerce sales along with saturation of U.S. physical retail space, changing consumer trends, a declining U.S. middle-class population and rising debt among retail companies are some of the factors that have led to retail bankruptcies, according to Coresight.

In 2018, Toys R Us began winding down some 900 stores across the U.S., including the Babies R Us brand. Jalil Malik, operations manager for NightLight Pediatric Urgent Care in Sugar Land, is located in First Colony Commons a few doors down from a now-shuttered Babies R Us.

Though its patients were not dependent on the Babies R Us, he said the closing had an effect.

“I cannot really say generically, but surely the traffic has decreased,” Malik said. “I can say we have had a negative impact on our numbers of patients.”

In addition to Babies R Us, First Colony Commons also has big-box vacancies where Conn’s HomePlus and Michaels used to be, said Kristen Barker, senior vice president at Wulfe & Co., the company leasing the property. The center’s Dallas-based owner purchased the shopping center two years ago, she said.

“Michaels was a tenant doing well at the center, but was looking to downsize,” Barker said. “They are still technically our tenant for a few more years.”

First Colony is also losing Outback Steakhouse to The Grid, the new shopping center developing nearby in Stafford. However, Barker and her leasing partner, Wulfe Principal Katherine Wildman, said they have secured a new restaurant concept but cannot disclose it yet.

They said they are also seeing brick-and-mortar stores created from online concepts. One example is B. Gregory Design, a custom wedding invitation boutique that got its start on Etsy. Barbara Gregory opened a storefront in Sugar Land Town Square in May.

“There is no other center in the area with three vacant boxes, so that is unique, but we are looking at what we can bring into the center to make it relevant,” Wildman said. “It could be a grocery store or an entertainment concept. Large medical and retail centers are becoming a trend.”

Barker said it typically takes at least 12 months to fill a space the size Babies R Us had and that the shopping center will bounce back because Sugar Land is one of the stronger suburban markets.

“We feel like anchor tenants are already established in the area, so we are targeting tenants who might want to reposition or people coming into Houston as they look for high home growth,” Barker said.

Farther down Hwy. 59, First Colony Mall is also experiencing tenants leaving as a result of retail bankruptcies. Three major retailers—Charlotte Russe, Gymboree and Payless—are closing their locations at the mall this year. The mall has about 1.2 million square feet of retail space and 145 retailers, according to its owner, Brookfield Properties. Its leasing plan shows about eight retail and restaurant spaces not occupied.

Brookfield Properties could not be reached for comment. However, the mall’s website shows that as those tenants have left, new ones continue to come in, including toy shop Toyz, clothing retailer New York & Company and handbag and jewelry retailer Jacob’s Accessories.

Online sales will continue to be why retailers downsize their space; however, most property owners cannot afford to break up the big boxes, so they are looking for new kinds of tenants, said Kimberly Lenardson, the vice president in Houston for Colliers International.

“Tenants who need a box that big are your big entertainment concepts like Main Event, Urban Air and Altitude [Trampoline Park],” Lenardson said. “Another new concept coming out is those entertainment spaces with indoor go carts.”

There are some caveats, though: The reality is owners of those types of concept are not always able to afford the higher rent that a national retailer can typically pay, she said.

Keri Curtis Schmidt, the president and CEO of the Fort Bend Chamber of Commerce, said members tell her the same thing.

“I hear that traditional big-box shops are fast being replaced with internet shopping and that folks are looking for new entertaining experiences,” Schmidt said. “Retailers that provide those new, fun activities seem to continue to draw customers to their stores.”

For this area’s retail sector to be protected from economic cycles that affect other areas of the country, Shankar said the retail mix has to change.

That includes many big-box or large stores needing to be replaced by a variety of small-format retailers, pop-up stores, direct-to-consumer brand stores and experience stores, he said.

Despite the store closures, retail employee numbers have steadily grown, according to the U.S. Census Bureau’s American Community Survey. Nearly 9,000 retail employees worked in Sugar Land and Missouri City as of 2017.

Shankar said brick-and-mortar stores continue to be relevant, but their role is changing.

“Not many physical stores are required anymore,” he said. “Omnichannel retailing—integrated use of multiple channels—led by online is taking over. Shoppers start shopping on mobile devices and the internet and even complete many purchases online.”