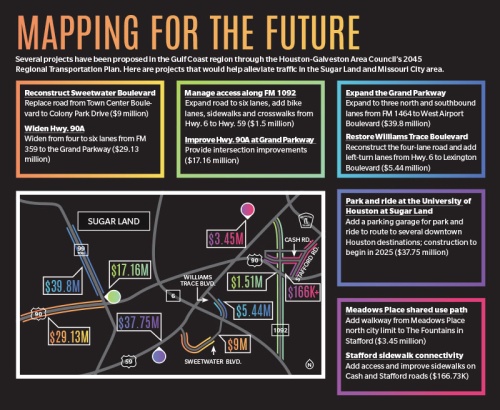 As the Greater Houston area population continues to grow, Fort Bend County has kept pace with the region consistently growing by about 100,000 residents every five years since 2000, according to U.S. Census Bureau data.

In response to this local growth as well as regional growth, the Houston-Galveston Area Council in its 2045 Regional Transportation Plan is calling for $340 million in federal funding for 22 proposed projects to improve transportation in Fort Bend County over the next 25 years. Regionally—spanning eight counties—the H-GAC is calling for $2.9 billion in federal funding for 193 proposed projects.

“Our transportation system is directly linked to quality of life in our community,” Fort Bend County Judge KP George said via email. “We need to have an all-of-the-above, forward-thinking approach as we get to 1 million residents and beyond.”

Although most projects proposed involve maintaining, extending or widening major thoroughfares and roadways, talk of more public high-occupancy transit options are not off the table, said Alan Clark, H-GAC Metropolitan Planning Organization Director, during a meeting at the Fort Bend Chamber of Commerce in late February.

Missouri City City Manager Anthony Snipes said he agrees multimodal—or diversified—options for transportation is required to keep up with projected growth and address congestion and commuter needs in the H-GAC’s eight-county region.

“This includes enhancements to existing roadway networks, transit buses, carpools, light rail, METRO, bike lanes and sidewalks,” Snipes said. “Missouri City would like to see using all these multimodal mass transit options for its residents by 2045.”

Snipes said major corridors in Missouri City that have seen significant increases in traffic include FM 1092, Hwy. 6 and Sienna Parkway.

“This is attributed to growth mainly in the Riverstone, Sienna, and Fort Bend Business Park areas located within the city and its [extraterritorial jurisdiction],” he said.

In the last few years, the biggest concern among Sugar Land residents has been traffic, according to an annual survey, Mayor Joe Zimmerman said.

“It’s a fact that we will not be able to build enough roads and capacity on the existing systems to accommodate the increase in population,” Zimmerman said. “We’re going to have to solve some of this with technology.”

When it comes to high-volume transit options, Missouri City has an agreement with the Metropolitan Transit Authority of Harris County to provide services connecting the general population to various destinations in the Greater Houston area. The city’s 353 Community Connector route and the 364 METRO Flex Route have both seen steady increases in ridership since the transit services began in the last half of 2019, according to METRO data.

“Growth in ridership is more pronounced for the Community Connector, which provides more personalized curb-to-destination service,” Snipes said. “Daily ridership during a weekday [in April] averaged 117 rides for the 363 service, and 30 rides for the 364 service.”

Sugar Land has an agreement with Fort Bend Transit to contribute about $80,000 per year to provide services to senior citizens who need to get to the medical center in Houston. Sugar Land residents voted several years ago to not pay for METRO services and instead redirect those funds for boosting economic development, Zimmerman said.

Solutions for the future

High-dollar proposed projects in Fort Bend County include work on the Grand Parkway and adding a new Park and Ride center through Fort Bend Transit at the University of Houston-Sugar Land.

“In the short term, we have major thoroughfares such as [Hwy.] 36, [Hwy.] 99, [Hwy. 59], and Westpark [Tollway] that must continue expanding to meet current demand,” George said. “However, a multimodal solution is the only way to plan for the future.”

While expanding roadways in the region will help relieve traffic, other solutions that could be implemented throughout the region include adding more bus and rail systems as well as more biking and walking paths.

The vision for the 2045 Regional Transportation Plan is to implement a multimodal transportation system that supports a desired quality of life, enhanced economic vitality and increased safety, access and mobility.

“It is pretty clear from H-GAC forecasts that current and projected roadway networks alone cannot accommodate growth to commute residents from the major employment centers. Hence the need for mass transit options,” Snipes said. “Residents are expected to use more mass transit options, should they be readily available.”

George said the need for roads that can handle the county’s population growth is essential, but there needs to also be alternative transit options to decrease dependency on low-occupancy vehicles.

“The Texas A&M Transportation Institute projects that with the increased growth of the region, residents will continue bringing more and more cars which will add to increased idle traffic times and congestion regardless of how many lanes we build,” George said.

Most of the federal dollars for the 2045 Regional Transportation Plan will come through the H-GAC and the Texas Department of Transportation, said Zimmerman, who serves as a member on the H-GAC board.

“Transportation is a broad category—it’s rail, it’s ports, it’s the freeway system, it’s parks—anything that is important to the eight-county region comes through the [Metropolitan Planning Organization] and that’s where those federal dollars flow in.”

Zimmerman said to keep up with growth in the region, more technology is necessary to keep traffic flowing.

“When you look at the 2045 plan, the thing that was clear to me was ... the population is going to increase exponentially,” he said. “You look at our freeway and major thoroughfare system and there’s no way we’re going to be able to build to that capacity so we’re going to have to look at creative ways.”

The 2045 Regional Transportation Plan is updated every four years to set investment priorities to efficiently connect people from point A to point B.

“Our residents would use any and all tools including rail and bus to alleviate their traffic wait times and prefer more transportation options than less,” George said.