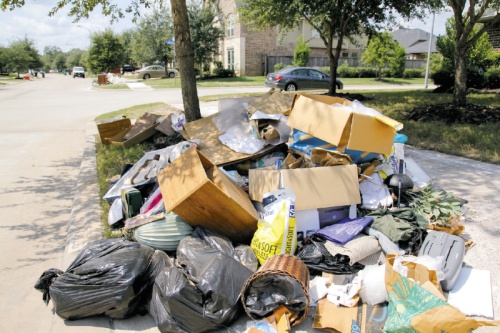 Debris is ready for collection outside a flood-damaged home in Riverstone.

Fort Bend County officials anticipated in September approximately 500,000 cubic yards of debris will need to be picked up in the weeks following Tropical Storm Harvey, while hundreds of homes in both Sugar Land and Missouri City were damaged during the historic flooding in late August.

Along with flood damage, homes and businesses in Missouri City saw significant wind damage due to two tornadoes that formed during the storms. In contrast, most of the damage incurred in Sugar Land is water-related, city officials said. One school in Fort Bend ISD took on standing water and will be closed for the foreseeable future until repairs are made.

Officials from Sugar Land and Fort Bend County Levee Improvement District 2 will conduct studies to examine damage and to identify future projects that may prevent this type of damage in future disasters.

“For those people—and there are thousands of them—that had water in their homes, it’s going to be a long recovery,” Fort Bend County Judge Robert Hebert said. “We’ve been here before. We’ve got good expertise in what needs to be done, and I’m confident we’ll get through this together.”

Missouri City officials estimate 200 to 400 homes and approximately 50 businesses within its city limits sustained damage from the storm, spokesperson Cory Stottlemyer said. Including extraterritorial jurisdictions—territories outside the city’s limits but still within its jurisdiction—officials estimate far more than 1,000 homes were damaged, he said. Lake Olympia, Quail Valley and Riverstone neighborhoods were the areas most significantly affected by flooding, Stottlemyer said.

The two tornadoes that touched down in the area Aug. 26 caused the most significant damage in the Quail Green West, Hunters Green, Fieldcrest, Woodland West and Glen Park subdivisions. Businesses along Texas Parkway suffered damage, too, Stottlemyer said.

Missouri City’s fire and rescue services department rescued more than 1,300 residents from homes and streets within city limits and in its ETJ, Stottlemyer said.

A preliminary estimate for private residential and commercial property damage is $8 million to $10 million, although this number could increase as the city continues to assess affected areas, he said. City staffers are still assessing damage to the city’s infrastructure, Stottlemyer said.

Sienna Plantation in Missouri City sustained both wind and water damage, said Sandy Denton, general manager of Sienna Plantation Associations, which consists of two subdivisions. An estimated 75 to 100 homes were affected by one tornado formed during Harvey, including roof damage, blown-out windows and destroyed gutters, Denton said. An unknown number of homes also took on water, she said.

Most of the flooding in Sugar Land occurred in the southern portion of LID 2 and around the Austin Parkway area near Chimneystone and Settlers Park subdivisions, along with other areas, Assistant City Manager Chris Steubing said. Officials estimate approximately 250 to 260 homes were damaged, Steubing said, adding that LID 2 was the Sugar Land levee district most significantly affected by Harvey.

The significance of Harvey was that not only did the region experience an unprecedented amount of rainfall, the Brazos River also rose to a record level, said Mike Stone, LID 2 general manager.

“You have what’s called a coincidental event,” Stone said, referring to the record amounts of rainfall and record water levels in the river.

Water in the district is supposed to flow through storm sewers to ditches throughout the district, which empty into the Brazos, Stone said. At one point, one ditch reached a record level of 66.5 feet above sea level, he said.

Stone said his team will work with Sugar Land officials to identify the houses that flooded, review the damage, and determine the circumstances of the damage, such as whether the flooding was due to water not draining properly into ditches or water being backed up in storm sewers. Stone did not provide a time line for that process.

Stone said officials from the city and LID 2 will then look at possible projects to prepare the community for future disaster events.

“The systems here worked well,” Stone said. “The water that got into the ditch and made it to the [pumping station] either went out the gates like it was supposed to or we pumped it out as fast as we could ... but this pump station was never designed to pump 40 inches of rain.”

As long as the disaster declaration is in effect, the county will qualify for reimbursement for services incurred from coping with effects of Hurricane Harvey, Hebert said.

“We know there have been about 47,000 individuals that have registered for FEMA assistance,” Braun said. “That gives us an idea of the [number] of people that were affected probably by water in their home.”

“The jurisdictions that authorize that will have to pay the expense of us being able to go out and reinspect the property, determine what the damages are, and we adjust that for the balance of the year from [the date the damage was declared],” said CAD chief appraiser Glen Whitehead.

Following Harvey, all FBISD schools shut down for two weeks, and administrators are applying for missed days waivers.

“We estimate that all of our campuses were impacted in some way,” spokeswoman Amanda Bubela said. “[Some] required some more extensive assistance.”

“We do anticipate that it’s going to be several months [before Juan Seguin reopens],” she said. “It’s in an area that flooded, and so it had standing water in parts of the building.”

FBISD schools are welcoming students outside of the district who have been displaced by the hurricane, Bubela said.