Phase 2 improvements at Cullinan Park, which are predicted to take until the end of the year to complete, include the additions of multiple trails, the extension of the park's entry road and additional parking. (Claire Shoop/Community Impact Newspaper)

The Cullinan Park Conservancy and the city of Sugar Land have kick-started capital improvements to Joseph S. and Lucie H. Cullinan Park, which sat tucked off Hwy. 6 in Sugar Land for nearly 30 years without any new development.

These recent improvements and those planned for 2021 as well as the ongoing coronavirus pandemic have lead many people to discover Cullinan Park for the first time, said Robbin Mallett, president of the Cullinan Park Conservancy.

Five years ago, the city of Sugar Land annexed the park, a move that allowed it to provide on-site security and upkeep services, Du said. However, the Houston Parks Board still owns two tracts of land for the park, and the city of Houston owns the other two tracts.

While the city of Sugar Land pays for costs associated day-to-day park maintenance, the Cullinan Park Conservancy was founded in 2010 with the goal of fundraising for major park improvements that aim to improve access to the park for human visitors while preserving its natural beauty, Mallett said. The Conservancy board hosts events and secures funding from community-based foundations, and then works with the city of Sugar Land to design and construct renovations.

“The conservancy is challenged with conserving and protecting the park for both the human visitors and the wildlife that call it home, so you have to balance how much development you do,” Mallett said. “We're really fortunate and thrilled that we have such a large chunk of land here that is preserved for nature, and that it’s going to remain that way.”

In September 2019, the city of Sugar Land and the conservancy completed Phase 1 improvements, which consisted of installing a restroom facility, new trail routes, signage, an overlook of White Lake and understory clearance along Hwy. 6, which improved the park’s visibility to the public, Du said. 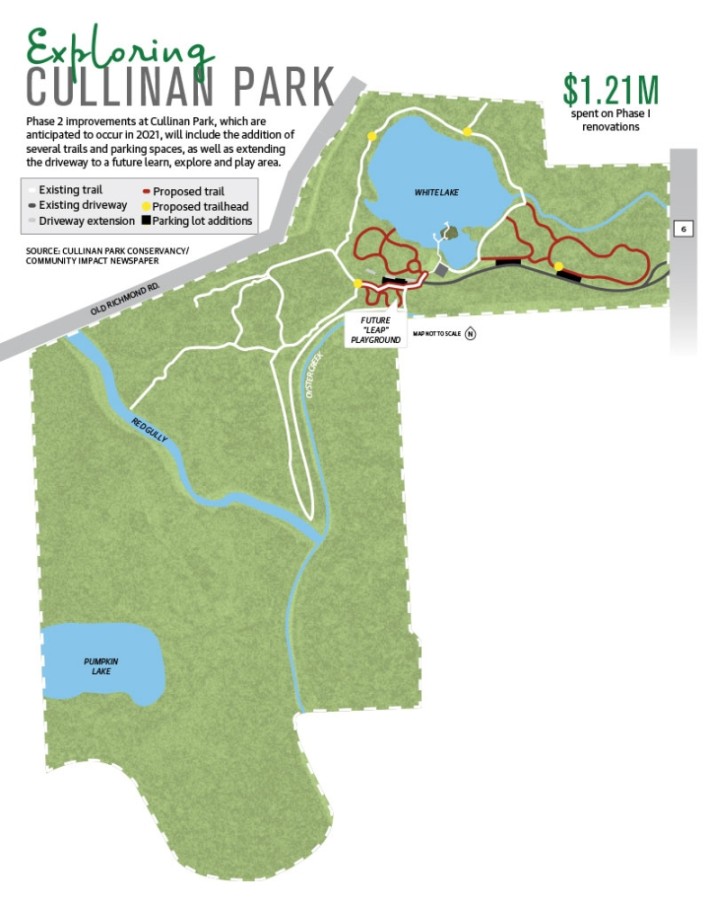 The conservancy fundraised approximately $1.2 million for Phase I improvements, according to documents from the city of Sugar Land.

Additionally, the conservancy donated $213,500 to the city of Sugar Land in December to begin design and construction documentation for Phase 2 improvements, which are expected to cost about $1 million in all, Du said. A $250,000 grant from Texas Parks and Wildlife will help cover some of the costs associated with the new trails, Mallett said.

Phase 2 improvements, which Mallett predicted will take until the end of 2021 to complete, include the addition of a decomposed granite trail for walkers and joggers, a new concrete trail connected to the park’s existing trail system, the extension of the park’s entry road and additional parking spaces.

“Parking here is overflowing—particularly on the weekends, but even on weeknights now—so people are parking down the entry road, and that's not really how we would like to have it,” Mallett said. “So additional parking is really important.”

Once Phase 2 improvements are complete, Mallett said the conservancy is focusing on fundraising for a learn, explore and play area, known as LEAP, geared toward children.

"[LEAP] is going to be a place that families are going to love bringing their children to," Mallett said. "It'll be safe, yet it will be hands-on. It will be exciting for the kids. They'll get to do things—get dirty, learn about nature, experience it."

The park has a long history. Du said the land was first settled in 1828 by Alexander Hodge, a member of the Old 300, the approximately 300 settlers who received land grants in Stephen F. Austin’s first colony. For the next 150 years, the land was used to raise cattle and grow sugar cane and other crops, Du said.

In 1989, the Houston Parks Board purchased the land and created Cullinan Park following a gift from Nina Cullinan as well as donations from the Brown Foundation, Texas Parks and Wildlife and the city of Houston. After Nina Cullinan’s death, half of her estate was left to the Houston Parks Board with the intention creating a nature park named after her parents Joseph S. and Lucie H. Cullinan.

Will Cravens, a member of the conservancy's board and the great-nephew of Nina Cullinan, said his great aunt’s love of nature comes from her father, Joseph S. Cullinan—the founder of Texaco.

“He was really passionate about the arts and also about parks ... and he really instilled this love of natural areas in his kids,” Cravens said. “That's why she was so interested in making this more of a nature park than a park with a bunch of other types of amenities. People can get out here and see nature as it truly is.”

While the city of Sugar Land does not track the number of visitors to Cullinan Park on a daily basis, Du said the city performed a moment-in-time traffic count in July. At that time, Du said there was an average of 350 cars per day, with approximately 300 on weekdays and 500 on the weekends.

“People love this park because of the nature, water, fishing, birding,” Du said. “In some spots, you don't feel like Texas.”

Albert Ribes, a self-described birder who frequently visits Cullinan Park on his way to or from his work at University of St. Thomas where he is a professor of biology, said the sheer size of the park is appealing because there is always something new to discover.

“It's a place where ... I can relax and it doesn't make me feel like I live in a city,” said Ribes, who earned the nickname the "King of Cullinan Park" after he became the first person to see 200 unique species of birds at the park. “For that time, it feels like I'm living back in the country. And it’s fantastic.”

Ribes said since the coronavirus pandemic began last March, he has seen a noticeable uptick in visitors to Cullinan Park—including both birders and nonbirders. He said the pandemic—and the need to do more activities outside—exposed the park, which he described as “the secret gem of Fort Bend [County],” to a greater number of people.

“As we're seeing during this pandemic, people are really able to go out and enjoy nature and probably get out of their houses,” Cravens said. “I think people are starting to see just how wonderful this park is.”

This will be Service King's 28th Houston-area location.