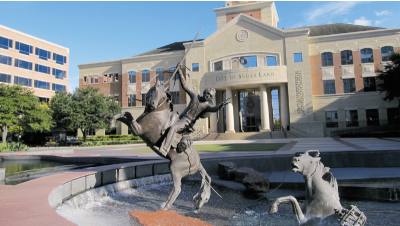 The city of Sugar Land in September adopted a $230.9 million budget for the new fiscal year, a reduction of $28.22 million from last year, due to a roughly $50 million reduction in capital

The city of Sugar Land in September adopted a $230.9 million budget for the new fiscal year, a reduction of $28.22 million from last year, due to a roughly $50 million reduction in capital improvement project expenditures.

The City Council adopted a property tax rate of $0.31762 per $100 valuation. Of that, $0.17921 will go toward the general maintenance and operations fund, and $0.13841 will go to debt service,  Sugar Land Finance Director Jennifer Brown said.

To offset declines in sales tax revenue, the city’s finance department recommended raising the city’s property tax rate by a little over 0.006 cent from  $0.31595 per $100 valuation to $0.32233 per $100 valuation, city officials said. However, the increase did not garner the necessary City Council votes to pass.

Without the rate of $0.32233 per $100 valuation, coupled with the declined expected sales tax revenue, the city needed to reduce the $230.9 million budget by $1.1 million, as of press time, Brown said.

Of that $1.1 million shortfall, $600,000 is the result of lower property tax revenue due to the adoption of the lower than recommended tax rate. The other $500,000 reflects projections for lower sales tax revenue. Brown said the lower projections come from sales tax data recorded in recent months.

Sales taxes are flatlining for several reasons, including the economic downturn of the oil and gas industry and the rise in online shopping, Alderete said.

“[Consumers] are spending more of their money on online purchases, and we may not be getting that sales tax revenue,” he said. “All those things kind of come together to impact what’s happening in our sales tax [collections].”

It is estimated $48.72 million will be collected in sales tax revenue in FY 2017-18, Brown said. The city will allocate $36.5 million of that to the general fund, and the remaining $12.22 million will be diverted to the city’s corporation funds, which are used for economic development, Brown said.

The widespread shutdown of businesses during Hurricane Harvey will most likely cause a dip in the city’s sales tax collections, but the amount lost will not be known until November, Alderete said.

“At this point, based on what we’ve seen in the last couple of months, we don’t foresee a recovery [in sales tax],” Brown said.

The council is scheduled to vote on these possible modifications later this month.

According to the release, the group met for the first time on Nov. 29 to discuss a possible implementation of a community engagement plan.