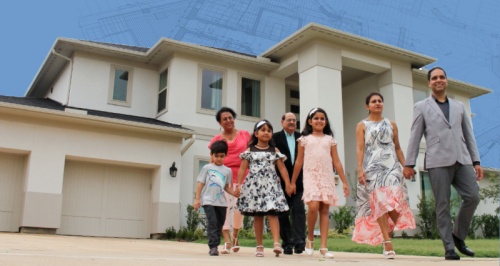 Nalini Seth, back left, lives in Sugar Land with her husband, daughter, son-in-law and grandchildren.

As housing trends continue to evolve and cater to community needs, an option emerging in Sugar Land is multigenerational housing, which Realtors and developers have said is most popular among the city’s growing Asian population, which comprises 38.5 percent of the city as of 2016.

Multigenerational homes accommodate at least three generations under one roof, and more developers in the Greater Houston area are starting to offer these floor plans. Some floor plans simply have a master bedroom and an extra guest room downstairs while other homes have two full-size master bedrooms.

“[Culture] is probably the No. 1 factor for extended families living under the same roof,” said Trey Reichert, vice president and general manager of the Riverstone community in the Sugar Land area. “Riverstone and pretty much all of the communities in the Sugar Land area are very, very diverse. What we’ve seen is, just in the past two to three years, Asian buyers make up the majority of our buyers. Specifically, in Riverstone, it’s probably close to 65 percent Asian buyers.”


A rise in demand

Reichert said in the last year, approximately 15 percent of homebuyers in Riverstone were looking into housing to accommodate extended family members. This is close to a national statistic that shows 20 percent of Americans lived in multigenerational households as of 2016, according to a Pew Research Center analysis.

“We’ve been tracking our buyer profiles for several years now, and that is definitely something we’ve noticed, not only in Riverstone but in several of our other Johnson Development communities where you definitely have extended families that are living under the same roof,” Reichert said.

Sugar Land is known for being a highly diverse community. However, the city does not have specific strategies in place to attract so much diversity, said Lisa Kocich-Meyer, Sugar Land’s director of planning.

“I don’t think we do anything with a specific intent or target,” she said. “I think a lot of the things that we do here in Sugar Land are attractive and appeal to a wide variety of people. I think we’re a very well-planned, well-managed and maintained city, and I think that’s attractive to a lot of folks across the board.”

Since last summer, Keller-Williams Realtor Mona Parikh said she has noticed an increase in requests for floor plans with two bedrooms downstairs. This accommodates aging grandparents who may not be able to navigate stairs easily.

“I think the trend is definitely more [prominent] now,” Parikh said. “Within the common areas of Sugar Land, I’ve probably noticed in the past year and a half,  there have been more families looking for homes that can accommodate multigenerational families.”

David Assid, Houston division president for Toll Brothers homebuilders, said this housing option has been much more widely discussed in the Sugar Land area just within the last five years. Although families living with more than two generations under the same roof can live in a single-family home, multigenerational floor plans provide more space and privacy for family members.

“By far, the international buyer is more in tune with looking for multigenerational housing,” Assid said. “My experience has been—I’m shooting in the dark here a little bit—but probably 90 percent of what I’ve seen based upon the homes where I know we’ve sold that option, it was more of an international buyer.”

Pricing for homes that accommodate multiple generations living under one roof can range from approximately $350,000 for a home in an older neighborhood with two bedrooms downstairs to $800,000-plus for a new home with a specially designed multigenerational floor plan, Parikh said. Costs depend on various factors, such as customization and locations.

Builders are flexible when it comes to buyer needs, and the cost of transforming a typical floor plan into a multigenerational floor plan does not have to be extremely expensive, said Kunal Seth, co-team lead for The Seth Brothers Real Estate Team, a Sugar Land-based RE/MAX real estate firm.

“The majority of builders introduce floor plans and concepts in the Sugar Land market and Houston market that have the option of converting a study into a bedroom,” he said. “The incremental cost, if the space is already there, costs anywhere from $2,000 to $5,000—that’s not a huge price jump up.”

“Some builders take a small bedroom that’s next to the garage, combine those two spaces and make it into a master suite,” Seth said. “The cost of converting a study and a garage into a master bedroom costs about $25,000.”

Multigenerational homes with two master bedrooms are popular options for residents who are part of the collectivistic culture because it allows space for grandparents, parents and children to live under one roof. Most Asian buyers are not interested in purchasing homes with a separate, detached living space for family members, Kunal said.

“In Asia, if you have a room that’s outside the home that’s cut off, that’s almost set up for a cleaning person or a live-in nanny,” Kunal said. “Families do not like to keep their in-laws and parents in the outside home.”

Nalini Seth, who moved to Riverstone in 2012 and into a multigenerational-type home last August, lives with her daughter, son-in-law and their children.

“We wanted to be with the kids, and the kids wanted to be with us,” Nalini said. “The way we can take care of our little babies and kids, I don’t think anybody else can do that. If no one is staying, then you have no choice, but you have to leave them at a day care or get a nanny since everybody has to work. It’s best to have us living together, and lots of aspects are taken care of.”

Another option for multigenerational floor plans that does not appeal to Asian buyers is having a separate kitchenette in the vicinity of the second master bedroom, Kunal said.

“That concept is to target multigenerational people, and they would want their own kitchen,” he said. “That does not appeal to cultural buyers because they say, ‘When we live under the same roof, we do communal cooking.’”

While Asian culture promotes multigenerational living, Caucasian families tend to live separately with only one to two generations in each household, Kunal said.

Nalini said she feels that living with her grandchildren has helped create a stronger bond than if they did not all live under the same roof.

“We are enjoying [the home],” Nalini said. “Living together, it makes an entirely different experience. The time to enjoy with the grandkids—it’s a gift.”
SHARE THIS STORY