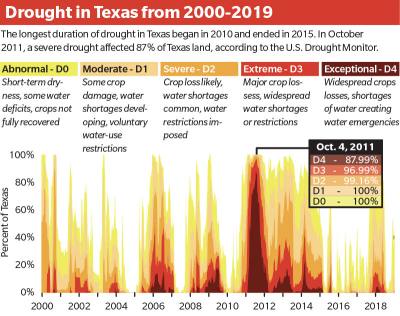 Sugar Land, Missouri City and other local water districts submitted drought contingency plans to the Texas Commission on Environmental Quality on May 1 knowing something new: that any additional water usage starting May 1 will come with a surcharge.

“Water is getting scarce, and so the requirements are getting stricter,” said Shashi Kumar, the Missouri City Public Works director. “If you overuse it, there is the consequences of fines.”

Water users are allocated an amount based on the average amount of water used per calendar month for the last three years, McGraw said.

If the TCEQ declares a drought, the city could pay surcharges on the extra water, ranging from $10,000 to $120,000 depending on the drought stage, costs that water providers would pass to consumers, McGraw said.

If the city could not get more water from the GCWA, it would work with the Fort Bend Subsidence District to augment the supply with well water, McGraw said.

Sugar Land City Council adopted its conservation plan at its April 16 meeting. In 2018, the city supplied an average of 20 million gallons per day of potable water, said Brian Butscher, assistant director of public works for the city of Sugar Land, via email.

To offset any surcharges, Butscher said the city has water rights along Oyster Creek and with the Brazos River Authority that are not subject to the GCWA restrictions, as well as a water supply model that uses different water supplies to minimize the impact of drought restrictions.

Most drought contingency plans do not have associated financial penalties; however, the GCWA decided it was the best way to get its customers to practice conservation, he said.

“We are the first to admit ours is stricter than most, but at the same time, to be successful in a real drought, we have to have compliance; it cannot be voluntary,” Langford said. “We are taking it much more seriously. If you don’t comply, financially it is going to hit you hard. If you do, it will cost you nothing.”

FBISD has six full-time mental health counselors who serve every campus in the district, and outside providers also offer services at select schools.

The 2014-29 plan is meant to guide city departments and staff in application of its resources, according to city documents.

Construction on Hwy. 6 expansion project to be complete by mid-June, TxDOT says

The project will expand Hwy. 6 in Sugar Land from six to eight lanes from Lexington Boulevard to Brooks Street.

The $2.3 million project provides continuous access to 420 acres of park land along the Brazos River and 9.5 miles of trails.

Aquatic therapy, which occurs in a pool, takes undue stress and weight off of a patient’s joints.

Located in the Vicksburg subdivision, the new street name will tentatively be named Prosperity Drive.

Consumers will receive vouchers to participating local businesses in return for buying gift cards from any Sugar Land business.