Despite progress toward cleaner air, ozone is still a concern in the Greater Houston region 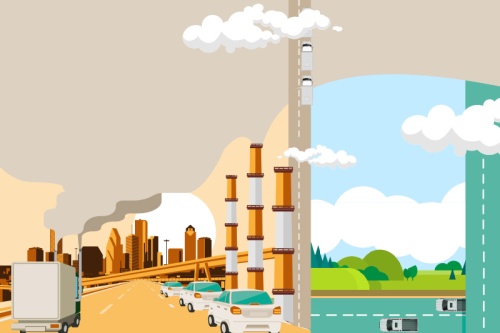 Although Houston’s pollutant and ozone levels have improved dramatically over the last 25 years, the region’s air quality is still not in the clear in terms of meeting the Environmental Protection Agency’s standards, according to researchers.

Agencies such as the Houston-Galveston Area Council and the Texas Department of Transportation have worked to improve roadways in and around Sugar Land and Missouri City, alleviating congestion and, as a consequence, reducing gas emissions from vehicles, said Alan Clark, director of transportation planning for H-GAC. However, the Greater Houston area, as a whole, still has obstacles to overcome.

“Ozone pollution is still a challenge, because the standard has repeatedly been made more stringent,” said Andrew Keese, media relations specialist for the Texas Commission on Environmental Quality, in an email.

In addition to being measured by stricter standards, air quality in the Greater Houston area is directly influenced by a rapidly growing population, transportation challenges and petrochemical refineries—all of which affects gas emissions, said Shelley Whitworth, air quality program manager for H-GAC.

“We need more than what we have and then we need folks to learn to change their way of thinking,” Whitworth said.
Contributing factors

On any given day in Houston, emissions from traffic, power plants and industry operations are fairly consistent, said James Flynn, research assistant professor of the Department of Earth and Atmospheric Sciences at the University of Houston. Flynn tracks data collected from the air monitoring site at UH-Sugar Land.

“The main difference between a bad ozone day and a good one is the weather. Stagnant conditions and plenty of sunlight can lead to high ozone [concentrations],” Flynn said.

Air monitoring sites also consider background concentrations of ozone, Flynn said. These are pollutants carried by the wind from other regions—coming from as far as Arkansas and Mexico.

“During Harvey, a lot of the chemical plants—the refineries—actually shut down,” Thomas said. “When plants like that shut down, it brings them outside of their normal operating conditions, which actually make them more at risk for increases in air pollution.”

Another factor is increased traffic on roadways, Clark said. The H-GAC is in the process of developing the 2045 Regional Transportation Plan.

“When we adopt a new plan, when we fund new projects—particularly those that are of significant regional impact—we have to perform an explicit air quality analysis, using the TCEQ’s process for measuring emission impacts to show, to demonstrate, that we will continue to be on track to meet the emissions reductions required in that [State Implementation Plan],” Clark said.

For areas not in compliance with EPA standards—such as Houston—the TCEQ develops what is called a state implementation plan, Flynn said.

“The state implementation plan is how the state plans ... to clean up an area,” he said. “They propose a set of rules and regulations in there that goes up to EPA and then there’s a whole review process and approval process. … As part of the SIP, they call for significant cuts in emissions.”

H-GAC aims to reduce emissions by promoting the use of alternatively fueled vehicles, working with Fort Bend County and others to expand commuter services and improve roads, Clark said. Construction work has taken place on Hwy. 90A, Beltway 8 and Hwy. 59, which directly affects commuters in Sugar Land and Missouri City.

“What we’re really looking at is how can we reduce the delay that people are experiencing when traveling, but also, how can we increase their choices so they’re not having to use always their own personal vehicle for every travel need that they have,” Clark said.
Ozone affects air quality

The Clean Air Act, originally established in 1970, makes it a requirement for the EPA to issue standards known as the National Ambient Air Quality Standards for six criteria pollutants: carbon monoxide, nitrogen dioxide, lead, ozone or smog, particulate matter and sulfur dioxide, according to the EPA. The act and its standards have been updated throughout the years.

Ozone in Texas is measured by the TCEQ’s network of regional ozone monitors that meet federal requirements, Keese said. The TCEQ uses these air monitoring stations across the Greater Houston area to track emissions, and if levels of any of the six criteria pollutants exceed the standards issued by the EPA, that area is called a nonattainment area.

Despite progress toward cleaner air, the Greater Houston area has never reached attainment—the acceptable standard—for ground-level ozone, which comes from chemical compounds and pollutants, according to the TCEQ.

The EPA measures ozone in terms of parts per billion, and after changing acceptable standards from 75 ppb to 70 ppb in 2015, a nonattainment area has ozone levels exceeding 70 ppb.

When measuring an average annual ozone level, the EPA considers data over a period of three years, Flynn said.

An air monitoring site was installed at UH-Sugar Land around 2008, and TCEQ has been collecting data from that station since 2009, Flynn said.

“It’s been steadily improving, and this is kind of a trend that’s been seen across the whole Houston area,” Flynn said. “We’re still above the EPA standards, but there’s been a steady improvement trend over the last several decade.”
Shifting EPA standards

As the EPA is working to update its requirements—a process that began in 2015 when it set standards to 70 ppb—researchers and companies have to prepare for the newer regulations.

“Under current law, the EPA is required to review these standards every five years … Houston is still nonattainment despite all the progress we’ve made,” said U.S. Rep. Pete Olson-R, Sugar Land. “We could not hit that goal in five years despite making all this progress.”

Whitworth said the issuing of new standards before cities have the chance to meet current standards makes it difficult to definitively rank Houston on air quality.

In order to make it easier for states to comply with new ozone standards, Olson has been working on getting H.R. 806, the Ozone Standards Implementation Act, through the Senate. It passed the House last summer but has been stuck in limbo ever since.

“What we are trying to do is make sure they don’t hit us [with] lower standards like they’ve done,” Olson said. “Give us the time to get our air cleaner under standards we can achieve, and then let’s go forward and make sure we do this.”

Some industries, such as the WA Parish Power Plant in Fort Bend County, have made major changes, Flynn said.

“They have actually made significant improvements in their emissions over the last 10-15 years or so,” he said. “In one case, I think they cut their [nitrogen oxide] emissions by 80-90 percent over what they were around 2000.”

Flynn said although the region has made huge strides in improving air quality, there is still work to be done.

“There’s hundreds of thousands of cars being driven every day, and we have a huge petrochemical and petroleum refining capacity and the ship channel,” he said. “You put all of these things together and you bring in the weather aspects of it, we have a unique situation here.”