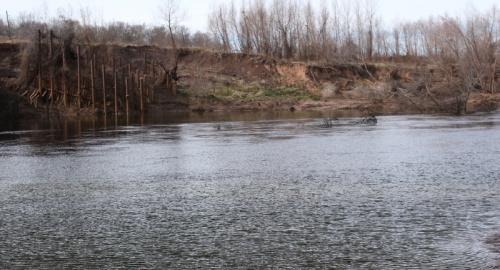 In response to erosion occurring along the Brazos River due to record-breaking torrential flooding events that have happened since 2015, officials with the city of Sugar Land have commissioned a four-month engineering study analyzing the river’s movement.

With this citywide study, officials will collaborate with the Brazos River Erosion Management study conducted by Fort Bend County in partnership with the Army Corps of Engineers Galveston District to develop ways to manage the river’s erosion.

“We’re all trying to do the same things, which is create a prioritization approach of all of the areas along the river throughout Fort Bend County,” said Chris Steubing, Sugar Land assistant city manager.

There is approximately $15 billion worth of property valuation just in Sugar Land, Steubing said. Of that, about $11.5 billion is behind levees, all of which at some point could be affected by the river, he said.

“When you get that value piece put in with the probability and your risk perspective, that’s where all of it becomes important,” Steubing said.

Sugar Land officials originally identified the river as a concern in 2010 and have been working with the Brazos River Authority for the past two years, Steubing said. Rain events, including the Memorial Day flood in 2015, the Tax Day flood in 2016 and Hurricane Harvey in 2017, have caused anywhere from 5 feet to approximately 30 feet of erosion along the 9 miles of river bank within the city limits, Steubing said.

“I would definitely say [the study] was accelerated because of Harvey,” Steubing said. “The three years that we’ve had back-to-back heavy rainfall events has exacerbated the problem in certain locations along the river.”

As part of the study, officials with construction engineering company Huitt-Zollars will fly a military-type drone to collect data points of the erosion, Assistant City Engineer Jessie Li said. This way, they can fly it again after another major rain event to measure the difference.

The majority of the land along the Brazos River in Sugar Land is surrounded by levees, Steubing said. The stretch of the river running through the city contains a mix of commercial and residential property on its banks.

“If a levee district is impacted, then usually anything within that district is susceptible or vulnerable at that point in time, and that’s why it’s such a high concern for us.”

In a few locations, including the bridge over the river at Hwy. 59, Sugar Land Memorial Park and Brazos River Park, there has been accelerated erosion due to the massive rainfall events that have taken place in the last few years, Steubing said.

“It would be probably the same amount of erosion over 30 years if you had one big event, but in this case of having these three historic [events] ... [soil] just starts to slough and fall,” he said.

In Sugar Land, 2010-12 was a period of heavy drought, which intensified the erosion that occurred during the historic rain events that followed, Steubing said.

“You come out of a time of drought … and then a few years later, you’re in the most significant rainfall I’ve ever experienced in my time on Earth and definitely within my time of being in the engineering side,” Steubing said.

Hebert said he estimates the county has spent well over $100 million in recent years to repair county assets like bridges from flood damage.

Studies have proven the recent historical flooding events have resulted in erosion that has exposed bridge supports and encroaches on levees, said Eddie Irigoyen, USACE Galveston District project engineer. The USACE only expects conditions to worsen.

“According to the geomantic analyses of the studies, it is projected that various bends of the river are expected to substantially increase in diameter and direction by year 2048 [based on migration rates in excess of 15 feet per year], further exposing the critical infrastructure within Fort Bend County,” Irigoyen said.

Nationwide, roughly $81 billion has been requested for disaster relief from the federal government in response to the California fires as well as hurricanes Irma, Maria and Harvey, Hebert said.

“The good news is that we’ve got the request in for the money,” he said. “The bad news is Congress hasn’t acted on the request. Until they pass a continued resolution, they won’t address funding for disaster recovery.”

As county officials await funding, Sugar Land officials are working on a list of projects that would require those resources, Steubing said.

“When we start pestering—as the mayor and the judge have been doing—Congress for funding, we will already have a prioritized list of where they need to start expending the money,” he said.


Fighting a force of nature

Although there is no way to stop the erosion entirely, there are various ways to alleviate it and plan for the river’s path, Steubing said. In some areas, replacement of materials or shifting of materials may be necessary, and these projects could cost between $50 million and $200 million, he said.

“We’re thinking, if we can get $500 million, that’s a great start,” Steubing said. “We want to have the prioritization piece put together with the county so everybody understands that it’s not the county or just the city—it’s all the cities working with the county, and there is a prioritized approach based off of risk and probability.”

“The governor’s going to have to determine how the money is applied,” he said. “We know we’re going to get a lot less than $1.4 billion, but anything we get will enable us to attack this problem in a rational way.”

The city’s study is in its initial phases, and more information will be revealed during upcoming City Council meetings, Steubing said.

“The river has been doing this for 1 million years,” Steubing said. “It’s moved all over this region. It just takes thousands of years for it to continue to move.”